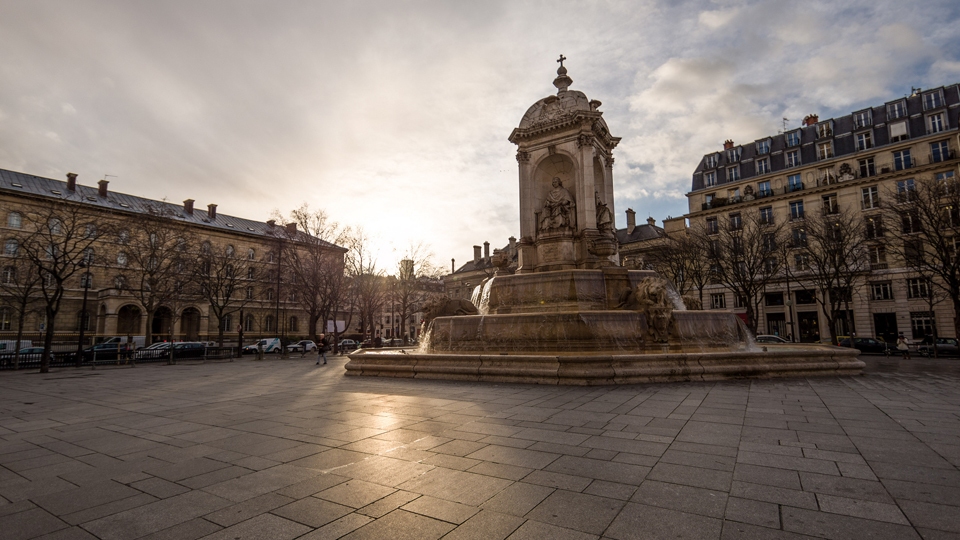 Best known for its distinctive Baroque facade and more recently, its prominent role in the best selling novel The Da Vinci Code, Saint Sulpice is still something of a hidden gem in the city. The Roman Catholic church sits just one block from Luxembourg Palace and Gardens in the fashionable 6th arrondissement of Paris. Before The Da Vinci Code, Saint Sulpice was probably most well known for its “lopsided” appearance. Primarily constructed in the 17th and 18th centuries, the design of the church originally featured two identical towers. The north tower stands 73 meters (239 feet) tall, but the south tower was never completed and is a full 5 meters (16½ feet) shorter than its counterpart. Beyond its unique exterior, highlights of Saint Sulpice include its beautiful frescoes, large pipe organ and gnomon (meridian line).

Saint Sulpice is an easy walk from both the Palais du Luxembourg and Saint-Sulpice metro station. As you approach the church, take note of the fountain that sits in its front square. Built in 1844, lions guard the base of the fountain and the four figures above them represent four prominent 17th century bishops. Beyond the fountain, the asymmetry created by the church’s “lopsided” towers is pretty easy to spot. In addition to being significantly shorter than the north tower, the south tower does not feature the same level of fine detailing.

Most visitors are surprised by the size of Saint Sulpice. It is the second largest church in Paris, behind Notre Dame Cathedral, and features rows of arched windows alongs its nave that help bathe the interior space with light. The main artistic attractions within the church are its frescoes. Painted by Eugène Delacroix, these paintings are not original to the church and were added as part of a restoration effort after Saint Sulpice was damaged in the French Revolution. The two most famous frescoes are both located in the Chapelle des Anges (Chapel of Angels). The first depicts Jacob wrestling with an angel, while the second illustrates Heliodorus being driven from the temple.

The Great Organ at Saint Sulpice dates back to 1781 and with 6,588 pipes, it is one of the largest in the world. Benefitting from a series of improvements and restorations over the centuries, the instrument is still in use today. Saint Sulpice typically holds organ recitals each Sunday from 11.30am to 12.05pm, and allows attendees to visit the organ loft afterwards.

For Da Vinci Code Fans
Saint Sulpice is featured prominently in chapters 19 and 22 of The Da Vinci Code. In the book, the albino monk Silas visits the church on his quest to unlock the secret of the Holy Grail. He follows the gnomon (meridian) line on the floor of the church to an obelisk, where he then hits a stumbling block along his quest. The gnomon is in fact a real feature in the church and is denoted by a thin brass line on the floor leading to a tall white marble obelisk. Far from providing clues to the Holy Grail, the 18th century gnomon was actually constructed to calculate the date of Easter each year.

Built to honor Saint Sulpicius, a bishop from the 7th century, the foundation stone of the church was laid in 1646. Construction of the church was prolonged and failed to gain momentum after changing architects several times throughout a period of about 100 years. Gilles-Marie Oppenordt is generally credited with bringing the project to near completion, and Italian architect Giovanni Servandoni was responsible for the church’s distinctive Baroque edifice. Jean Chalgrin, who designed the Arc de Triomphe, helped further the construction along and completed the north tower of the church in 1780. At that point, however, construction of Saint Sulpice was abandoned and the south tower remains incomplete to this day. Like many prominent buildings in Paris, the church was damaged in the French Revolution. It was later restored in the 19th century, which is when Eugène Delacroix added the church’s distinctive frescoes.

Full of charm and beautiful architecture, the 6th arrondissement of Paris is a wonderful place to explore on foot. Pair a morning visit to Saint Sulpice with a leisurely lunch at a cafe along the oh-so-chic Boulevard Saint-Germain or enjoy a picnic with a view at Luxembourg Gardens.