Capture postcard-worthy photos of the Eiffel Tower and explore the Trocadéro, an expansive complex of museums, sculptures, gardens and fountains located directly across The Iron Lady. 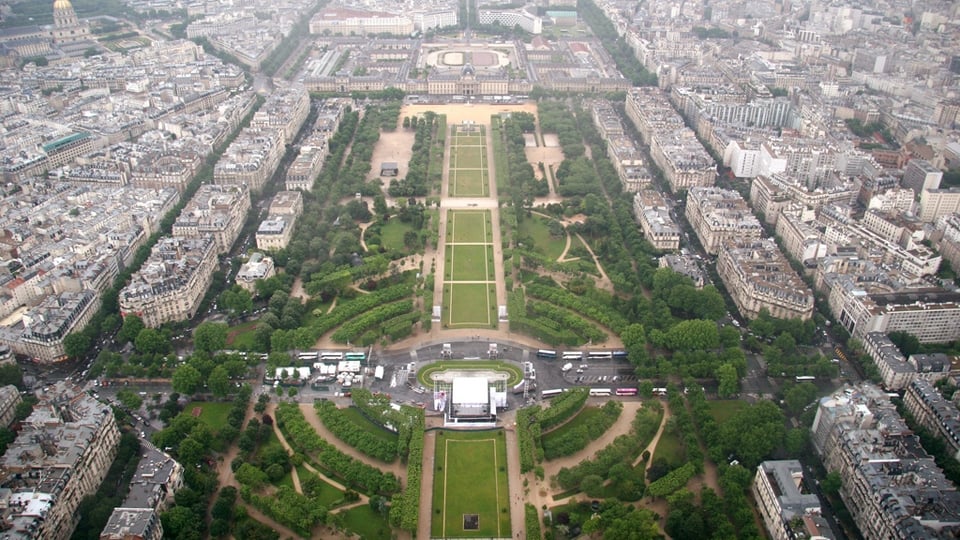 Enjoy stunning views of the Eiffel Tower from the Trocadéro, an expansive complex of museums, sculptures, gardens and fountains. Anchoring the space is the striking Palais de Chaillot, which houses museums dedicated to maritime history, architecture and anthropology. In front of the Palais de Chaillot are the magnificent Trocadéro Gardens. Built for the 1937 World’s Fair in Paris, the gardens align perfectly with the base of the Eiffel Tower. Today this beautiful space plays a role in popular seasonal events throughout the year, including a fireworks show each Bastille Day and an annual Christmas Market with an ice skating rink. Complete with beautiful fountains and an array of sculptures, the postcard-worthy views of the Eiffel Tower from Trocadéro Gardens are simply not to be missed.

Jardins du Trocadéro
Created for the 1937 World’s Fair in Paris, the Jardins du Trocadéro offers almost 10,000 square meters of beautiful green space in the middle of the French capital. These gardens may be relatively new by Paris standards, but that doesn’t make them any less spectacular. Designed to impress, the crowning features of the garden are the Warsaw Fountains. Its 20 water cannons line up perfectly with the Eiffel Tower directly across the Seine, creating a spectacular visual effect. On the side of the fountains closest to the Palais de Chaillot you’ll find two of the city’s most famous stone statues, L’homme and La Femme. One of the most iconic images of Paris is the view from behind L’homme or La Femme, with the statues looking out towards the Eiffel Tower.

The gardens are a popular place in the summer, and offer the perfect vantage point to watch the Eiffel Tower light show in the evenings. Come late November, the Jardins du Trocadéro transform into a Parisian winter wonderland. Rows of little wooden chalets selling sweet treats and holiday trinkets line up alongside the Warsaw Fountains. At the base of the garden, in front of the Palais de Chaillot, there is an ice rink featuring amazing views of the Eiffel Tower.

Musée de la Marine (Maritime Museum)
Explore hundreds of years of maritime history at the Musée de la Marine. The museum contains everything from naval paintings and old artifacts, to examples of centuries old navigation equipment and 17th century model ships. For French and military history buffs, the museum covers naval history and famous sea battles all the way up to modern times. The Musée de la Marine is  very family friendly and has plenty to offer visitors of all ages.

L’Aquarium de Paris (Paris Aquarium)
Another favorite with children, the entrance to the Paris Aquarium is located right in front of the Palais de Chaillot. The aquarium itself is housed underground and occupies what was formerly a quarry. The popular attraction comprises of 43 different tanks containing more than 10,000 fish, including 25 sharks. There is a touch pool and plenty of fun activities for children as well as two cinema screens and a Japanese restaurant overlooking a 600,000-liter tank.

Le Musée de l’Homme
Recently reopened to rave reviews, the Musée de l’Homme inside the Palais de Chaillot examines the evolution of humanity over the past 150,000 years. This state-of-the-art exhibition space links art with artifacts and historic collections to piece together a comprehensive view of the history of mankind. The museum’s exhibits are tied to three major questions: Where do we come from? What are we? Where are we going?

The current site of the Palais de Chaillot was previously home to the Palais du Trocadéro, built for the 1878 World’s Fair. The original Palais du Trocadéro was used as a primary meeting space during the fair and was inspired by Moorish and Byzantine architecture. The Eiffel Tower, which stands opposite the Trocadéro complex, was built just 11 years later for the 1889 World’s Fair.

In the 1930s it was time for Paris to host yet another fair, this time the International Exposition dedicated to Art and Technology in Modern Life. The Palais du Trocadéro was torn down in anticipation of the event and in its place the current Palais de Chaillot was built. In front of the new building, the gardens were also updated just in time for the 1937 fair. The event would prove to be memorable, not only due to the lasting legacy of the Palais de Chaillot, but because it famously hosted the USSR and Nazi Germany in opposite-facing pavilions.

Following the end of World War II the Palais de Chaillot became the first ever headquarters of the United Nations. It was here in 1948 that the Universal Declaration of Human Rights was adopted. The UN moved in the early 1950s and in more recent times the distinctive structure has been home to several of Paris’ major museums.