Finding a Dream Apartment in Paris: Margaux and the Seven Year Itch 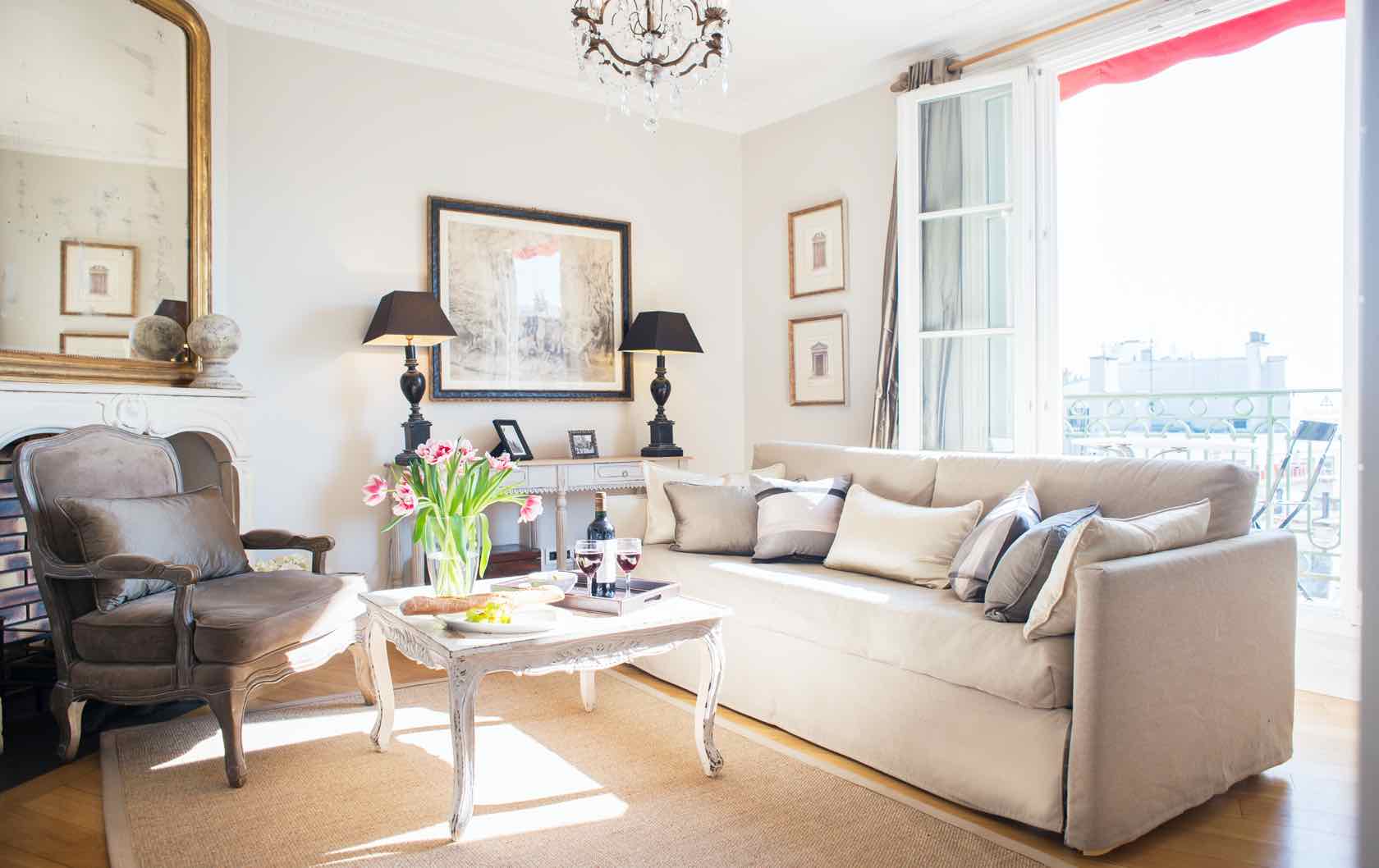 Finding your dream apartment in Paris can be a long and painful process, but we tell buyers not to compromise. When you step into the perfect apartment, you'll feel it the moment you walk inside. The unusual story of how clients purchased the gorgeous Margaux is no exception. It all began in 2005, when an insurance company decided to sell the apartments in one of their buildings near the Champ de Mars. Some tenants purchased their apartments, some moved out and some long term tenants decided to continue renting.

We were among the first to view the apartments for sale in the complex. Like Goldilocks and the Three Bears, some apartments were too big, some too small, some were located on lower floors and were too dark, some had monotonous views of the buildings across the street.

Yet, after much looking, there were two apartments that were just right! These stood out from all the rest and they were exactly what our clients were looking for — and the lists were long: Perfect location near to local shops; an excellent patisserie four doors away (actually  my own sweet tooth intervening in the search); the fabulous rue Cler market street one block over; sunlight and fabulous Paris views; located near the Champs de Mars and the Seine; easy access to other favorite neighborhoods on foot, bus or metro.  In short– everything. A must on our buyers' list — a true Parisian neighborhood with sidewalk cafe's and open air markets.

We stepped inside, saw the views, balconies and high ceilings and made full asking price offers on the spot for each one in order to outflank other buyers. In France, a full-asking price offer cannot be turned down by the seller. The clients were delighted, and over the next few years, the apartments were transformed into the Cognac Paris rental and Chateau Latour apartment.

The Cognac: Just Right for One Family 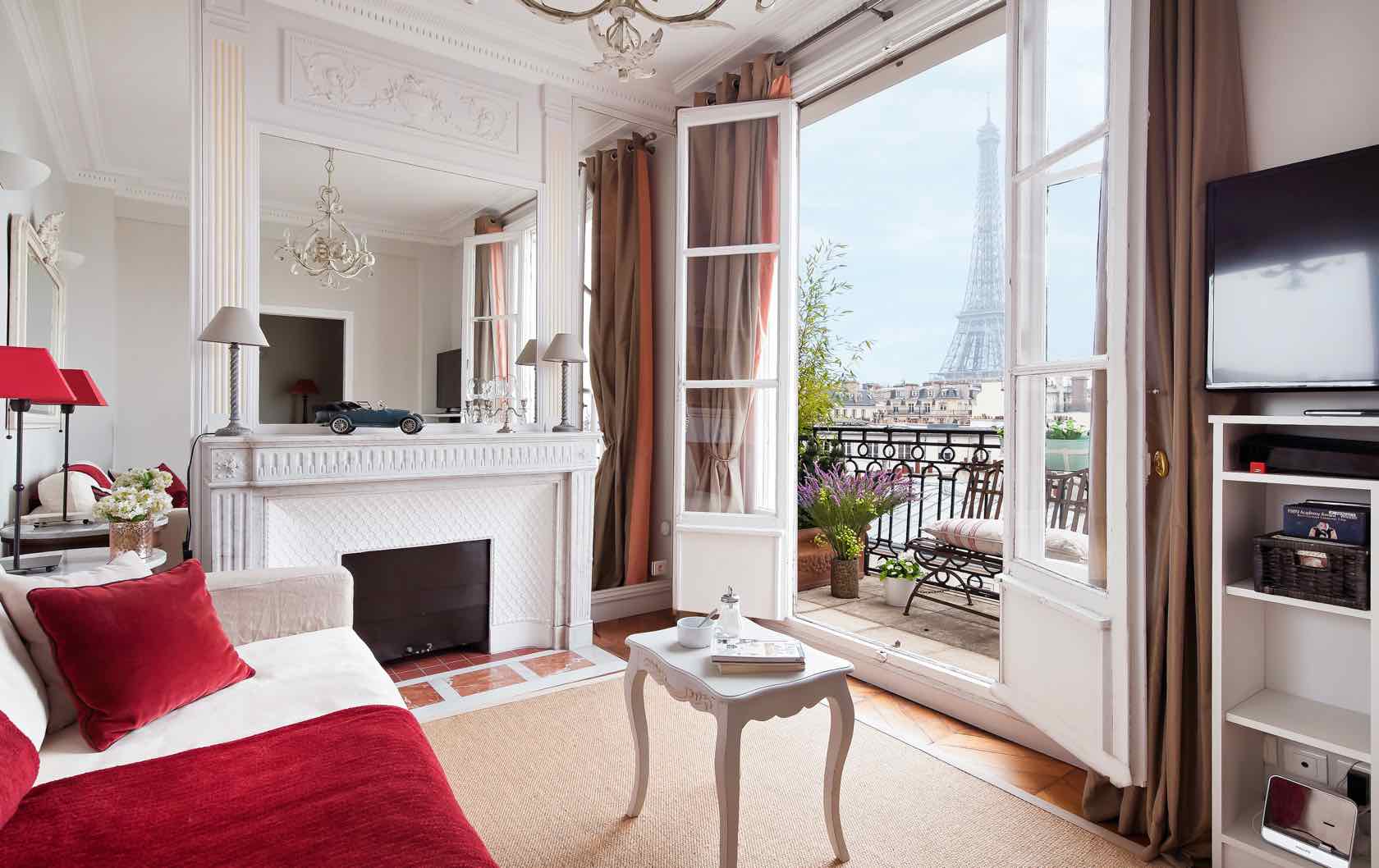 Chateau Latour: Perfect for Another 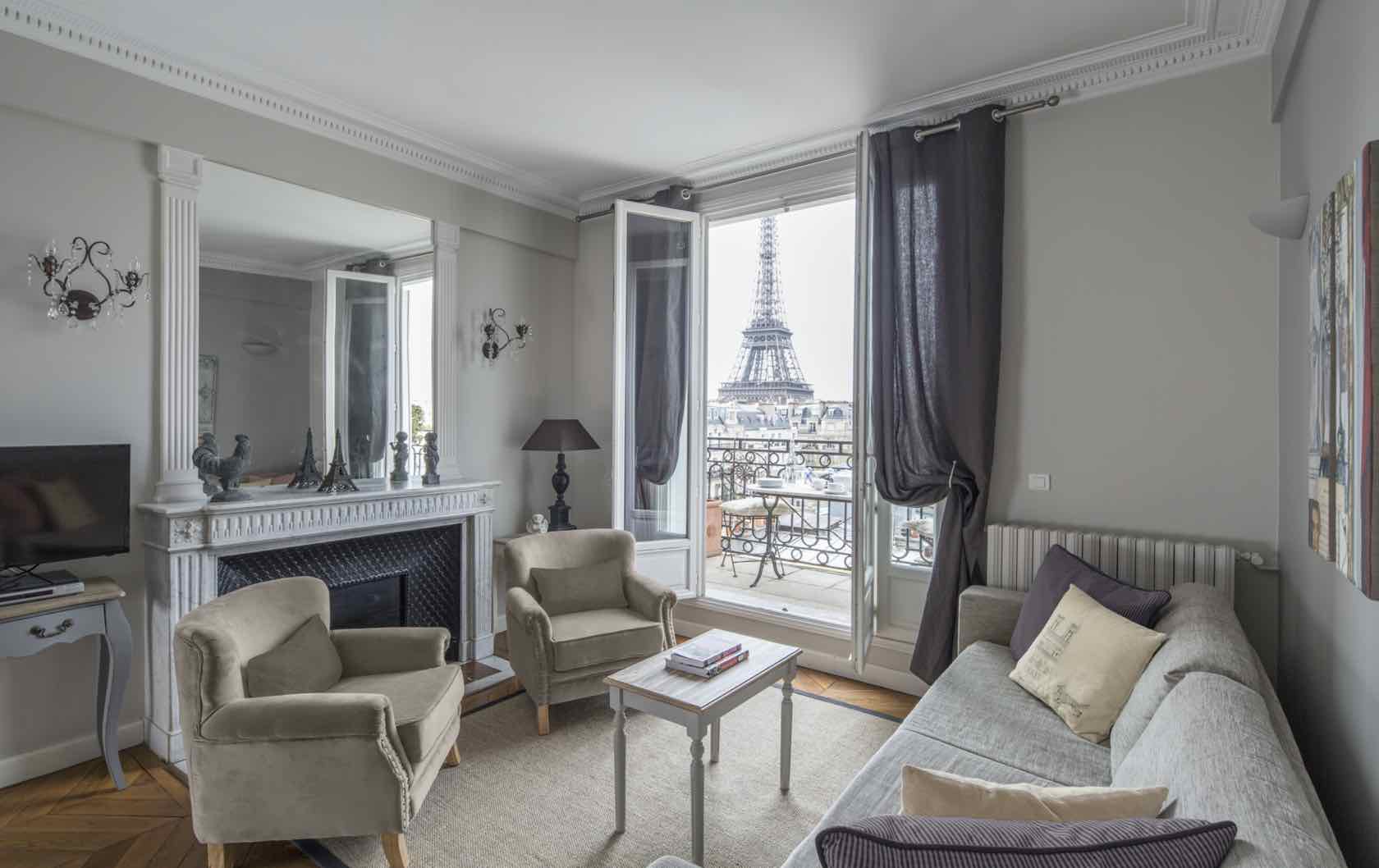 “What About That One?”

As I stood in the courtyard with the agent, I looked up and noticed an apartment on the top floor with a long wrap-around balcony. Imagining amazing panoramic views of Paris, I asked, “What about that apartment? Has it been sold?” The agent replied that the renters did not wish to purchase, but had lived there for decades and decided to continue renting it. The apartment could therefore be sold, but with sitting tenants. This situation was similar to buying “en viager,” or buying an apartment from an owner who continues to live there until they die or move. In this case, they were renters who had decided to continue renting it. 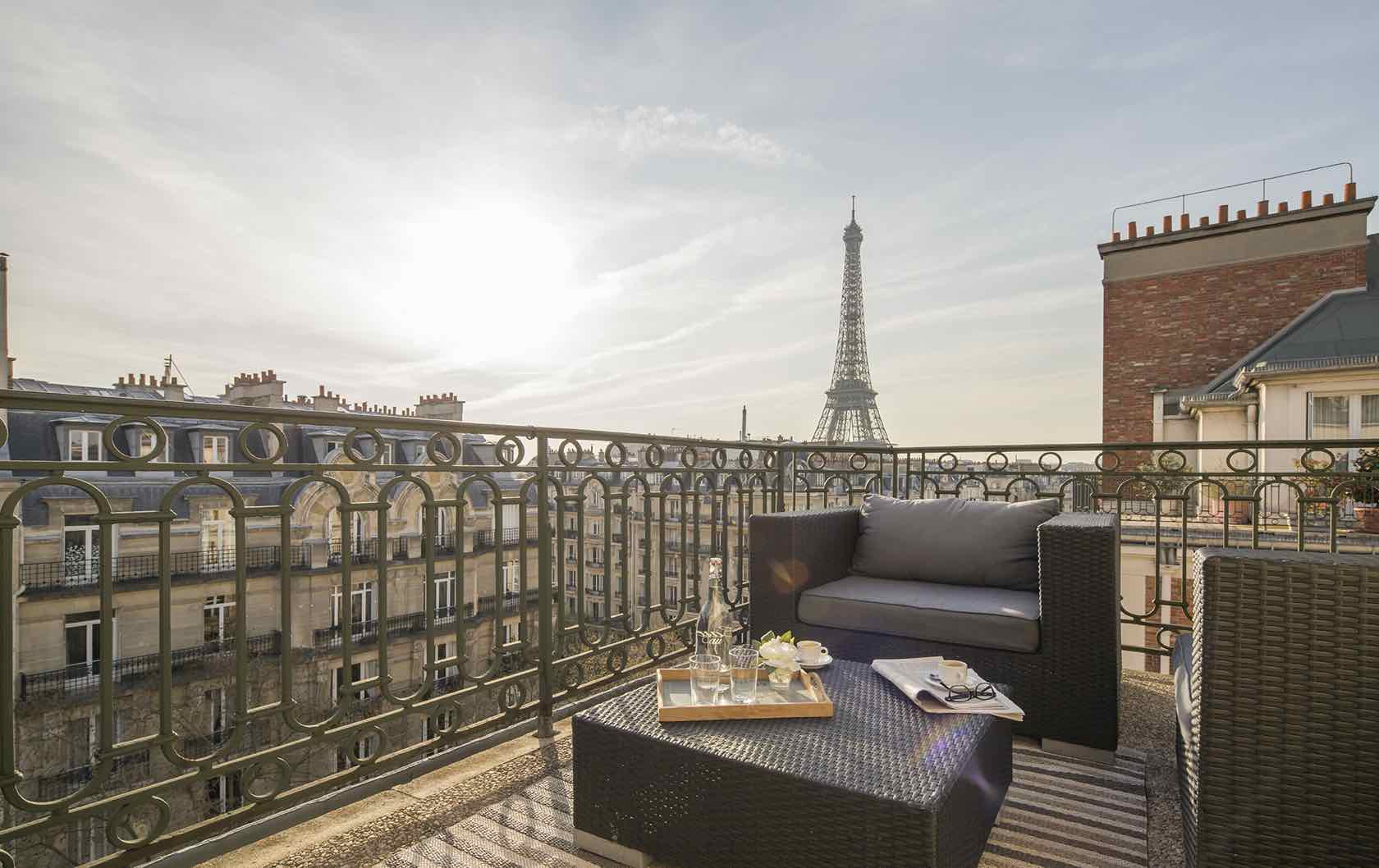 The views and sunlight were amazing, but the downside was obvious. There were sitting tenants who did not plan to move, paying a low fixed rent of less than Euros 1,300 per month. The mortgage would be considerably more than the rental income. And… the owners could not move in until the tenants decided to move out. It didn’t make financial sense, but I couldn’t resist having a look. The agent made an appointment to view it and, as predicted, it was simply fabulous. Around 1,000 square feet of apartment, plus the most amazing wrap around balcony and terrace we had ever seen in Paris! I visited the apartment which hadn't been touched in 50 years

Untouched for over 50 years

The apartment was occupied by a gracious Parisian couple – Monsieur was 90 and Madame was was 88. Her parents and family were the original occupants of the apartment when she was little and one of the first occupants of the building when it was completed in the 1930s.  It was built by an automotive company in the days of industrial conglomerates. Decades later, it was sold to a large French insurance company, who finally decided that the long-term returns on rentals did not meet their investment hurdle rates. Monsieur et Madame T. moved in when they were married after World War II. They raised five children, all of whom still live in Paris and have children and grandchildren of their own. One of their sons told us he remembers running up and down the balconies and getting into trouble when he was little.

Despite the temptations the apartment offered, the low fixed rent and uncertainty regarding the timing of the family's departure  were a deal breaker for most. To make things worse, the selling price was discounted by only 30% of the going market rate. It had the “wow” factor, but we didn’t know anyone who might be interested. The kitchen hadn't been touched since 1950. Cold water ran thru heating coils, a slow trickle! The kitchen became the TV room in the newly remodeled Margaux Small pantry was extended to become a bathroom

Months later, we were approached by a family who had stayed with Paris Perfect several times and had decided to purchase their own apartment in Paris. From the California Bay Area, the professional couple was in their mid-50s with two teenage children and they adored spending time Paris — from exploring ever-changing art exhibitions, to discovering new restaurants, attending lectures and book signings, taking cooking and French classes, making friends with the local merchants, neighbors and the large expat community. In short– they loved all that this vibrant city has to offer. Retirement was several years away and not in a hurry. They had asked us to let them know if something wonderful became available. This bedroom became the bright and sunny blue bedroom in the Margaux!

We warned them that finding the right apartment for sale in Paris was not a quick or easy process and referred them to some of the articles we wrote about how to buy a Paris apartment. While we were happy to refer them to search agencies, they wanted to live in the village-like atmosphere of the 7th arrondissement and for us to find the perfect apartment. We promised to keep our eyes open for any opportunities.

As I walked by the building one day, a light bulb went on. Why not find out if the penthouse apartment was still for sale? I called the agent and, yes it was. I called the family in California to explain the situation. They were skeptical that the apartment could be so unique that it was worth waiting for sitting tenants to vacate, but agreed to fly over and see it. The bathroom was painted pink with gray and white checked French tiles.

The apartment hadn’t been touched since the 1940s and required a complete renovation. The kitchen sink wasn’t even plumbed into the hot water system! The electricity dated from the 1930s and there was only one large pink bathroom. But the couple stepped outside onto the terrace and fell in love!

They made an offer the following week (no one else was in a rush to buy an apartment with sitting tenants), obtained financing and closed three months later. Then the waiting began.  Although the new owners were allowed to raise the rent by a modest amount each year, they refused. They respected the family's history and the fact that this was their home. “This family has lived here for three generations and M. T is on a fixed pension. We would never want our parents to be forced to leave an apartment they have lived in for decades. And neither should they.”

M. et Madame stayed for five more years and neither ourselves nor the owners ever disturbed them. Finally, in 2011 — five years after purchase — Monsieur wrote the owners and said that he and his wife would be moving to a retirement home in Normandy. The previous winter had been exceptionally cold and they had to rely on the concierge to buy their daily baguette on icy days, because they were afraid to walk on slippery streets.

The owners offered one month free to help the couple take the time they needed. In July 2011, the new owners visited their apartment for the second time in five years. The first time in over 70 years since the apartment had changed families.

Then the real adventure began! The next chapter in this Paris apartment's history took nine months. With many important decisions to make and many changes, it took that much time to finalize the new layout and finally to begin remodeling! Stay tuned for the continuation of this story and to see the incredible transformation of this remarkable Paris apartment into the gorgeous and romantic Margaux vacation rental!

The Perfect Apartment in Paris

Here are some of the finished results after a long nine months of planning and construction: Entryway After: The walls were opened up to take advantage of the light and to show off the wonderful spacious feeling. We enlarged the bedroom where M. T was standing, moving the hallway in order to gain more space. Instead of a small room with one bed, it was transformed into a queen-sized room with built in closets and en suite bathroom. Best of all, you can lay in bed and watch the magic light show on the Eiffel Tower every night! The bedroom with single bed became the blue bedroom. After much argument and 24 versions of floor plans, the architect figured out how to move the kitchen and turn the original room into the TV room. And the empty blue room in the original picture became the kitchen.

The new owners have spent wonderful moments here, with their children and friends. We joke with them that the apartment could be empty and all they really needed was for us to find the sofa and armchairs on the balcony below, so they can enjoy each and every sunset in Paris. We tease the owners that the apartment could be completely empty and they would still love staying here, just for the amazing views they enjoy every evening at sunset.

Here are some more photos of the Margaux apartment for rent on the beautiful Left Bank of Paris.

An important PS. We benefited enormously from this experience because in the process, we made lifelong friends —  warm people who we enjoy spending time with whenever they are in Paris. Making deep friendships has been one of the unexpected rewards of being part of Paris Perfect!  We followed our passion to share the joys of living like a Parisian and have met many wonderful and fascinating people who have gone on to become Paris Perfect owners and friends.

Posted on Friday, August 24th, 2012 at 11:37 am in Apartment Rentals. You can follow any responses to this entry through the RSS 2.0 feed. You can leave a response, or trackback from your own site. 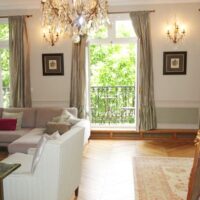 Sneak Preview: Behind the Scenes at the Gorgeous New Hermitage Apartment! 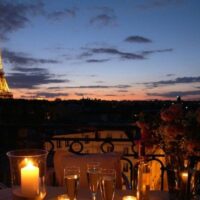 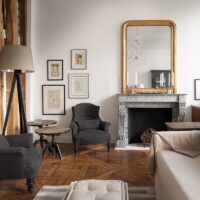 6 Responses to “Finding a Dream Apartment in Paris: Margaux and the Seven Year Itch”