Hit the winter sales in Paris for great bargains!

We're right in the midst of soldes season in Paris. That is … sale time! There are two official sale periods in Paris each year, and that's the time that many shopping lovers plan a trip to the City of Sales … er, I mean, Light. The first sale period starts just after the New Year, and sure helps with adding a bit of cheer, not to mention hustle and bustle in the department stores and best shopping streets in Paris. The second sale period takes place in July just before the traditional August holiday period. Perfect for getting something fashionable to wear on holiday! The shopping period is announced in advance, and this year the winter Paris sales began on January 9th and continue until February 12th. If you're traveling to Paris in the next two weeks … be sure to leave some space in your suitcases for treasures you'll find at the Paris winter soldes! Clever window displays for the winter sales at Galeries Lafayette

You'll find great sales on at the Grand Magasins on Boulevard Haussmann, which are the huge department stores in Paris, as well as at designer stores and small boutiques. One of our favorite shopping streets in Paris is the charming Rue du Commerce in the 15th arrondissement just on the opposite side of the Champ de Mars gardens from the 7th arrondissement. This is a very popular spot with the Parisians in the neighborhoods nearby, and there you'll enjoy a great selection of shops as well as cute restaurants where you can rest your feet while shopping.

Happy bargain hunting in Paris during the winter sales this year!

Posted on Saturday, January 26th, 2013 at 3:05 pm in Shopping. You can follow any responses to this entry through the RSS 2.0 feed. You can leave a response, or trackback from your own site. 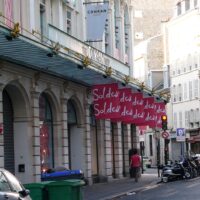 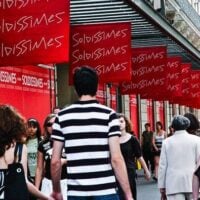 The Shopping Dream of a Lifetime – Paris Summer Sales 2014

Soldes in France: Guide to Shopping the Biannual Sales in Paris