Don’t Be the “Poisson d’Avril” this April Fools’ Day! One of the best parts of living in another country is learning new traditions and how they're similar or different around the world. France has its own version of April Fools' Day, and it is called “Poisson d’Avril” (The fish of April). On this day, school children adore sticking elaborately-colored fish on the backs of their classmates (and sometimes, parents), thinking up intricate plots to do so without being caught. Once the “victim” realizes there is a fish taped to his or her back, the others cry out “Poisson d’Avril” and everybody has a good laugh.

Just what is the origin of this fishy-tradition? As with many French Easter traditions, it is based on the Christian calendar. April 1st was often the end of Lent, a period in which Christians gave up meat and had to substitute fish for their main protein. To offer a fake fish on April 1st was a way of making fun of all the fish one was obligated to consume over the Lenten period, and a way to make light of the serious nature of Lent.

The French aren’t beyond playing pranks on April 1st, with one of the most notable being the rail system (the SNCF) using the voice of Homer Simpson to make all the public announcements at the Paris train stations on that day. If you are fond of browsing Paris flea markets and antique shows, be on the lookout for early 20th-century postcards that feature fanciful drawings of fish. These were also exchanged as gifts on April 1st, and are quite valuable finds today.

Watch out for those sneaky April Fools' Day fish!

Posted on Wednesday, April 1st, 2015 at 11:40 am in Paris Events. You can follow any responses to this entry through the RSS 2.0 feed. You can leave a response, or trackback from your own site. 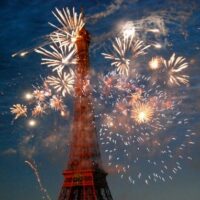 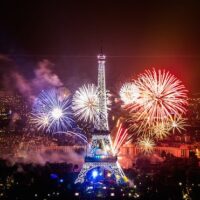 Fun Things to Do & See This Bastille Day!

How to Spend Christmas in Paris 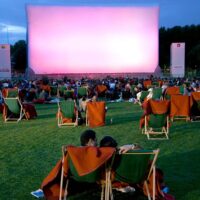