Madelyn here! This is Part III of my Fabulous Life as a Flâneuse series, in which I’ll share the things I discover on my constant walks through Paris. There are so many interesting things to see in this city, so come take a walk with me! If you’d like to read Part I of the series, when I unexpectedly fell down the rabbit hole, click here. And to see one of my morning runs in Saint Germain des Prés, click here.

Growing up in an Air Force family, I was fortunate to live in many beautiful places – including California, Texas, Germany and Italy. My mother wanted to see the world, so we traveled throughout Europe at every possible chance we got, but our limited budget meant we traveled cheaply, often walking places rather than taking public transport. None of our trips impressed me more than Paris. I'd walk north, south, east or west and always discover something beautiful every single day. There's no better place on earth to be a flâneur, and today I'd like to talk about the history of this concept. Flâner: A verb invented by the French to mean wandering through the city without an end goal or specific direction. It means to stroll leisurely and soak in the sights of the city. How did this word come to be? By the king who is often referred to the father of the modern city – Henri IV. In 1610, Henri IV became the first city planner in Europe when he decreed that a new bridge, the Pont Neuf (now the oldest bridge in Paris), and a new square, Place Dauphine, be built at the birth site of Paris, Kilomètre Zéro. Pont Neuf, which spans from both sides of the river, touching base at the tip of the Île de la Cité, would be the widest and longest ever built and furthermore, be completely open to the public. This meant that everyone was able to admire the views of the river, regardless of social standing, from the emerging merchant class to the nobility.

Before then, all bridges were topped with buildings and houses, so that there was no such thing as a gorgeous river view as we know it today. In fact, the entire length of the river bank was also packed full with more buildings, so the world never knew how beautiful the Seine views were! Pont Neuf changed all of that – it was the first bridge that offered a view and provided enough space for events to take place – vendors could set up small booths and comedians or performers could provide a spectacle for passing viewers.

One of the only examples of these old, building-laden bridges can be found in Florence, Italy: The Ponte Vecchio. Ponte Vecchio is a great example of what old bridges used to look like – covered in buildings.

Henri IV was a revolutionary king. His actions not only led to France becoming a center of new architecture in 1600, but also established the first site of culture and entertainment of its kind, on the Place Dauphine in the heart of Paris. The Place Dauphine was built to celebrate the birth of his son and heir, Louis XII, called the Dauphin. An amphitheater was situated in the middle of the square, where plays, music and other performances were shown for all to see. For the first time ever, all the citizens of Paris could wander along the bridge and meander into Place Dauphine, all the while enjoying performances, plays, satires and even browse jewelry and other knick knacks to purchase.

It's difficult to convey just how much of an innovation this little corner of the Île de la Cité was! It was the first time people thought about walking, just for the pleasure of it. A writer in the late 1600s even wrote, “the nobility have discovered their feet.” They descended from their fine carriages and walked along the city's open streets in their fine clothes, enjoying the same entertainment as the commoners.

The history of Place Dauphine is especially fascinating for me ever since the renovation and opening of our apartment building at #25 – read more about that here! This is how the idea of the flâneur was born. The beauty of wandering, strolling along, and simply enjoying the scenery around you. What a wonderful pastime this is in Paris! In fact, Balzac described flânerie as “the gastronomy of the eye.”

So come to Paris and enjoy being a Flâneur, every day!

Posted on Thursday, September 1st, 2016 at 10:00 am in Parisian Living. You can follow any responses to this entry through the RSS 2.0 feed. You can leave a response, or trackback from your own site. 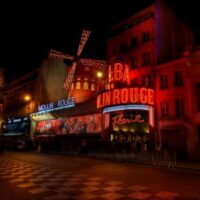 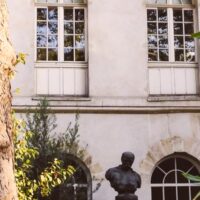 The Fascinating Life of a Flaneuse – Crisp Morning Run 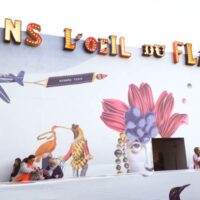 The Fascinating Life of a Flâneuse – Hermès Exhibition