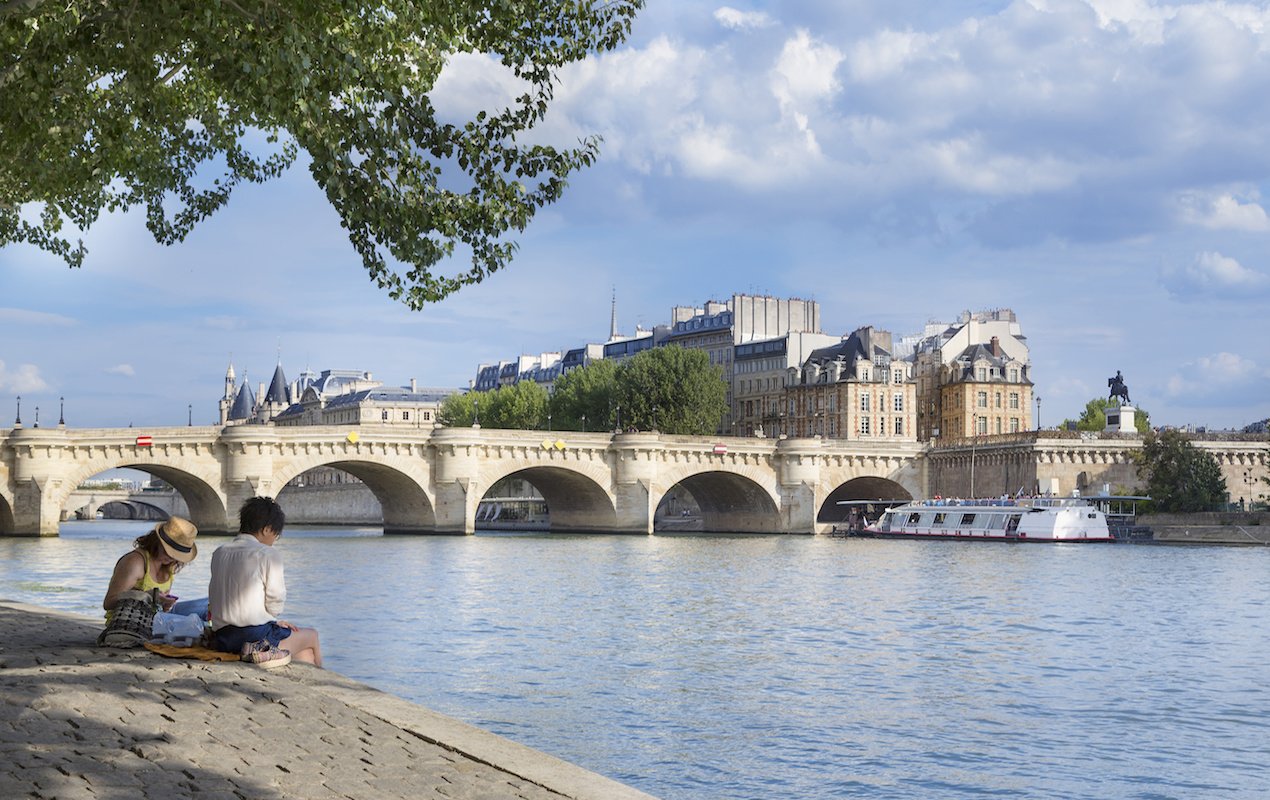 After 7 years of stagnation, Paris apartment prices trended higher in late 2016 and accelerated in early 2017. This trend is expected to continue throughout 2017 and beyond.

History and Where We Are Today 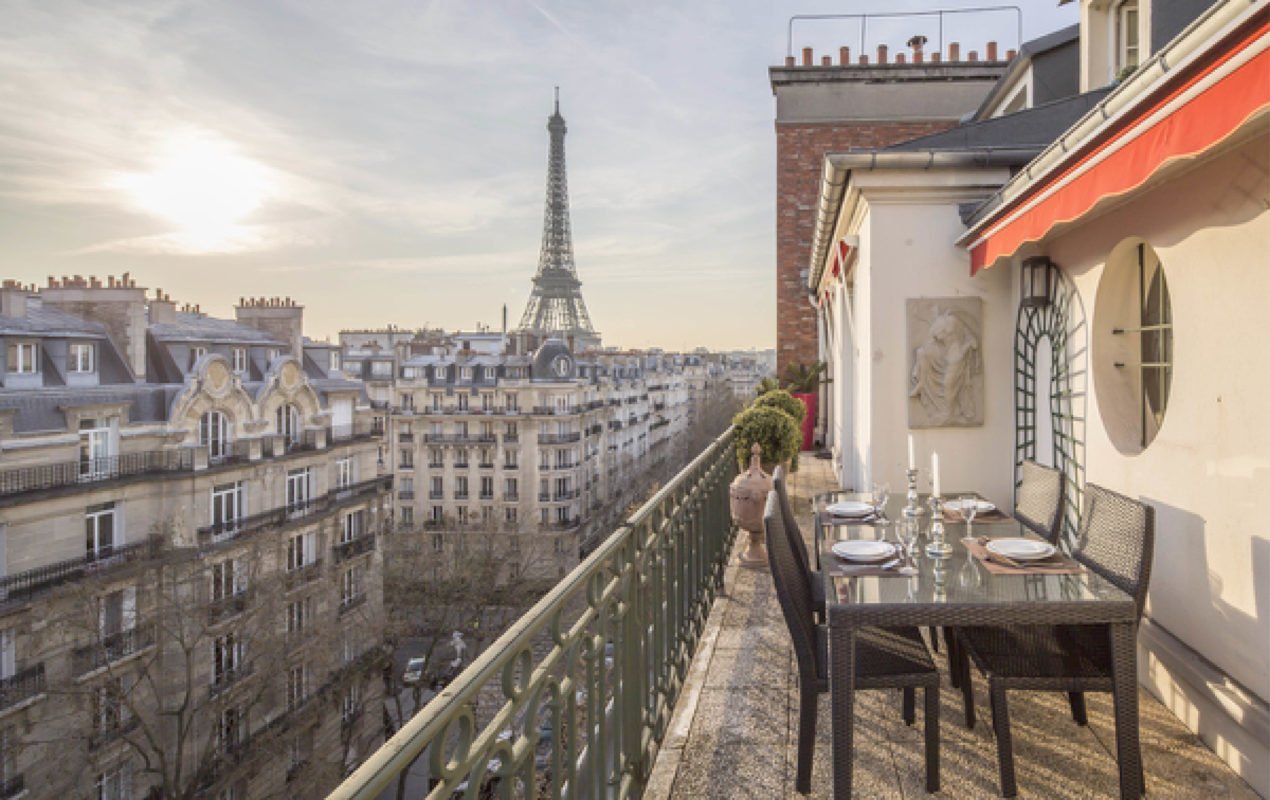 We decided to dig back to understand the trends post the 2008 global crash, to see what happened in Paris and whether it tracked the US and major cities elsewhere in the world. We looked at historical prices for Paris overall, then by individual arrondissement, tracked highest priced areas and number of transactions.  The results proved extremely interesting; Paris has been operating on a different demand curve than the US or other countries.  Instead of declining sharply after 2008, Paris prices and demand started to rise until late 2010, then remained virtually constant for the next 7 years.  Paris is emerging from this ‘7-year itch’ as we speak.

2008 Global Meltdown: But Not For Paris

Before and after the financial meltdown in 2008, real estate trends in Paris apartment prices were very different from that of the United States and other countries.

Slow and Steady: For the past 7 years, Paris apartment prices have on average, remained the same. Basically, ‘the same’ is a euphemism for stagnant. In Q1 2017, the average price of a Paris apartment was € 8,450 per square meter, virtually the same price (€8,460/square meter) in 2012, and slightly higher than €7,500 in 2010. A stagnant 7 year period that we jokingly call The Seven Year Itch.

A significant trend began in the second half of 2016: the most desirable apartments and quartiers started seeing price increases, bidding wars due to extremely high demand. While masked by the average numbers above, prices and demand for the best properties have literally taken off.

Highest-Priced Arrondissements: Still Below 2012 Peak – No Change in Rankings

Note: The above reflects average prices for all apartment transactions in a given quartier: those with or without elevators, ground floor concierge flats and penthouses. This masks the significant increase in demand and prices for the most desirable properties.

A Huge Bonus for Dollar-Based Buyers 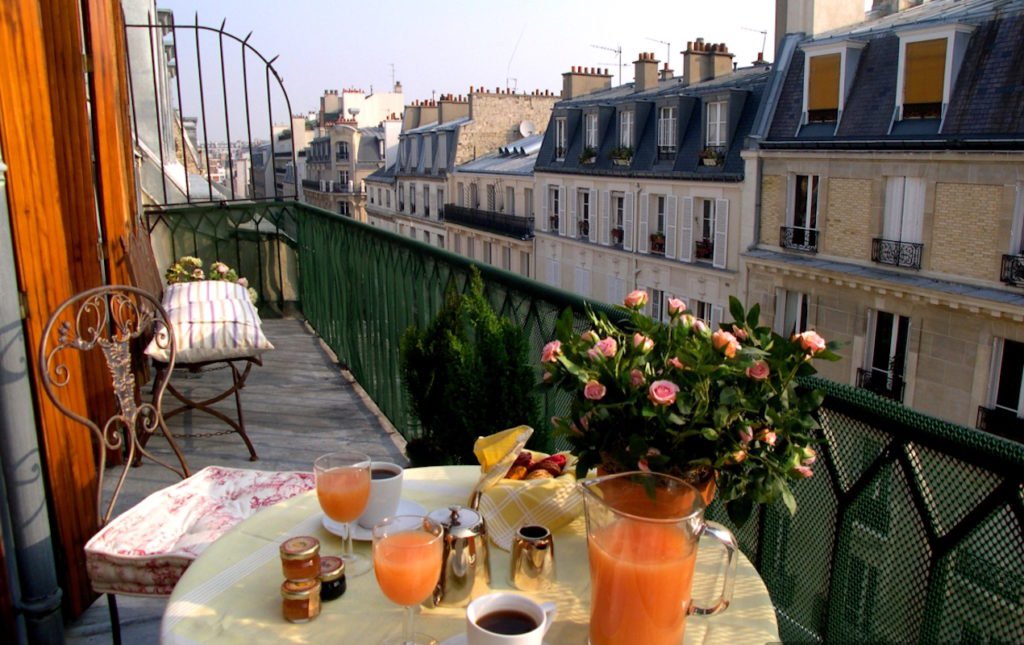 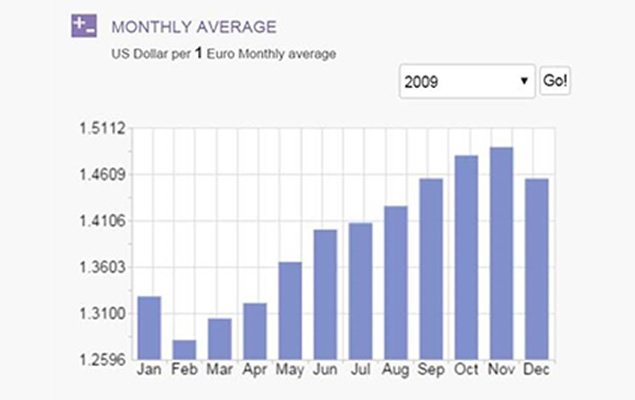 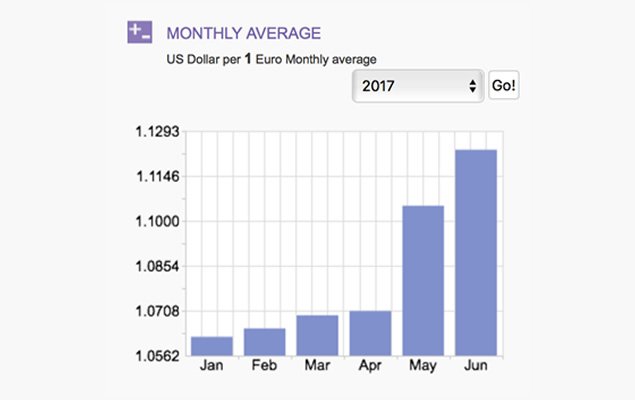 Conclusion: Paris is on Sale

Even if an apartment is the same price as 2009, the dollar’s purchasing power is 22% stronger. In other words, the same apartment you fell in love with a few years ago is now 22% cheaper due to the dollar’s strength alone. We are cautious investors, but with the strong dollar as a backstop, we feel comfortable recommending Paris real estate. 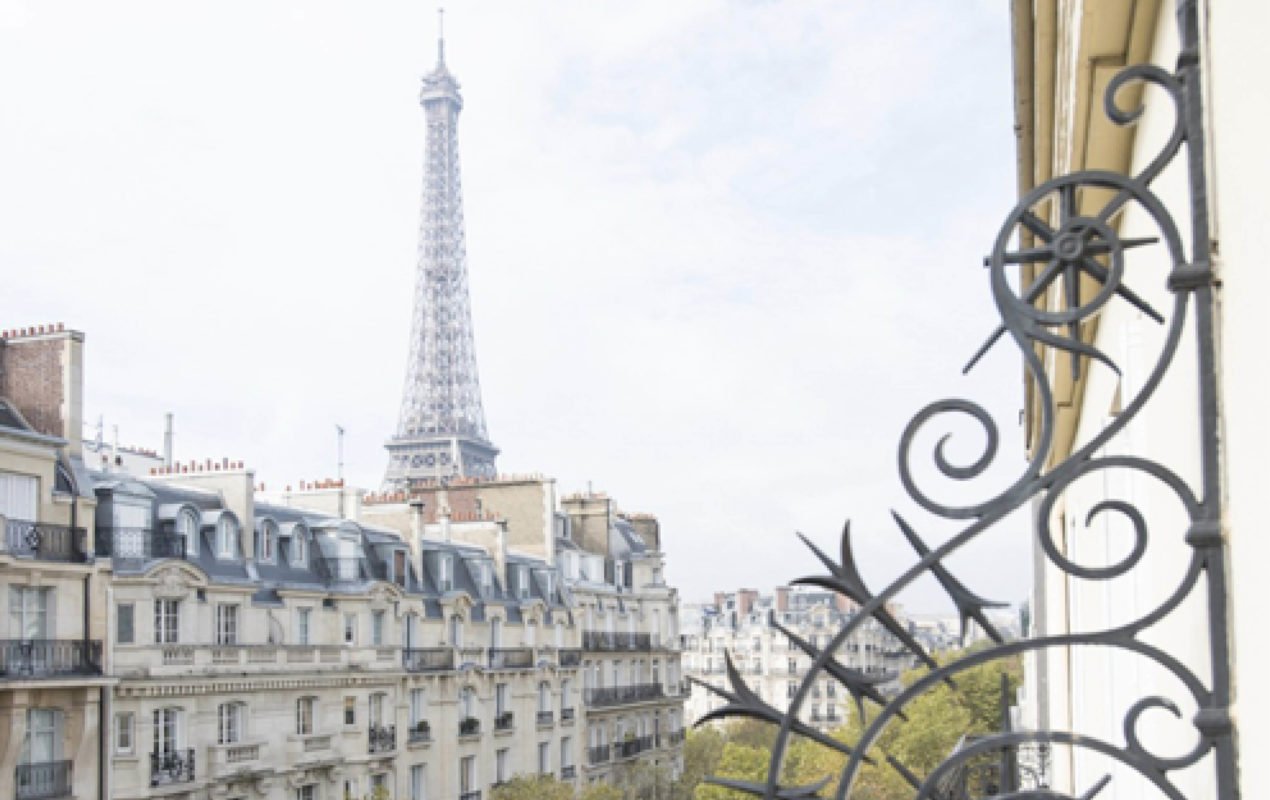 Paris on sale for dollar-based buyers

In 2017, the average price of a Parisian apartment per square meter finally surpassed the 2012 record and reached 8,450€/m2, which marks an increase of 5.5% in one year. But this is virtually the same price as in 2010, with small fluctuations in between.

This price increase is widespread in Paris, as two years of these increasing prices have overcome four years of decline. The figure below illustrates the correction and slow rise in old Paris apartment prices.

This is the most interesting chart because it shows the price cycle over the past decade. It’s interesting to note that Paris prices never experienced a bubble, such as occurred in the United States. Paris apartment prices rose slowly and gradually from the 1990’s onward, declined modestly from 2008 to 2009, then rose sharply in 2010 and early until 2011. Then, nothing. Paris apartment prices stagnated/declined until today.

We believe there are two reasons for this steadier pattern: 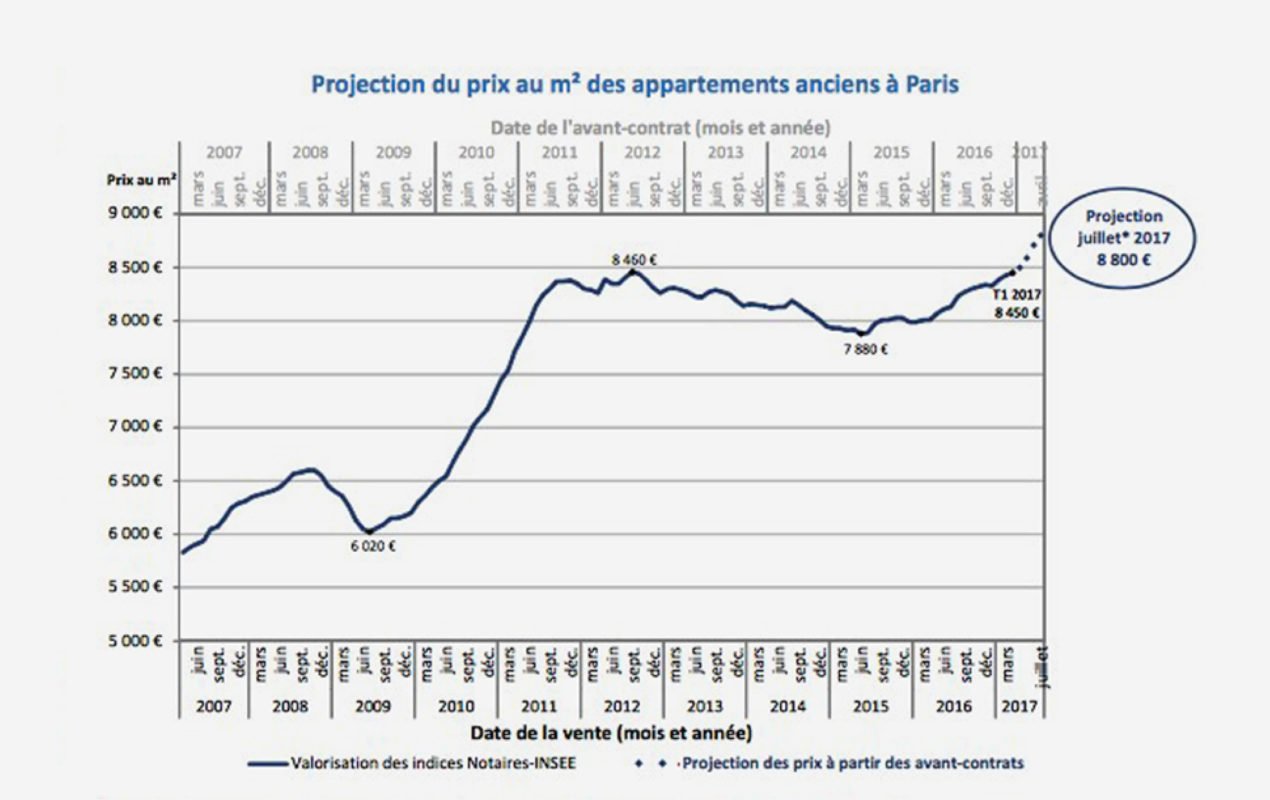 These prices reflect the average of all districts or arrondissements in Paris – the circular Paris Snail: all 20 quartiers of Paris. the average includes all types of apartments from unfurnished maid’s rooms without elevators, to recently remodeled luxury flats. The most important indicator is that of individual arrondissements. While they always include the best and worst, you get an overall sense of value and desirability.

Note: The above chart tracks ‘appartements anciens’ or apartments in older buildings, vs modern ones. Older buildings are valued higher than modern buildings constructed from the 1930’s onwards, which generally have a lower value due to quality, space, ceiling height etc.

As previously mentioned, the price increases in Parisian apartments were essentially universal throughout the city. Thirteen out of the twenty arrondissements saw price increases in excess of 5% over the past year, which is significant. The figure below illustrates the percent differences in price during the 1st trimester of 2017. The arrondissement with the greatest percentage increase is the 8th, with an increase of 11.8%. The only quartier that saw a decrease in prices was the 7th arrondissement, whose prices decreased by 3%. Note that a few transactions — above or below average — will cause a large swing in the quarter, as the case in the 7th. 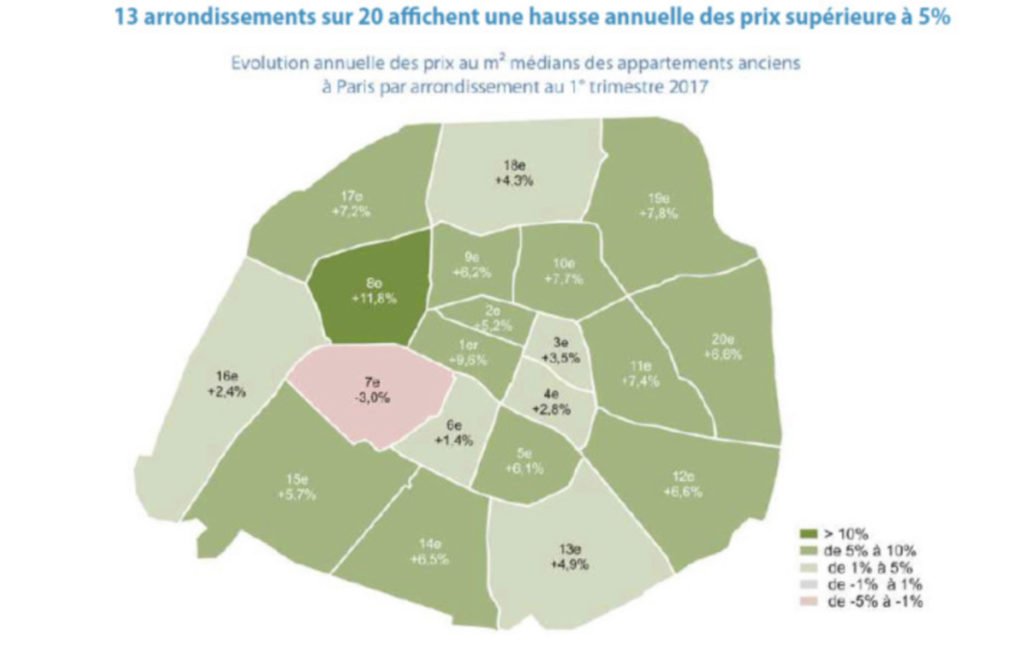 The 6th and 7th arrondissements remain the most expensive neighborhoods.  They retained their value during the 7 year slump

The variance by quarter among the highest priced quartiers is interesting; in short, only the Champs Elyseés showed a significant price increase during that time. Otherwise, prices were relatively unchanged.

2017: 4 Year Evolution of Most Expensive Quartiers

The Champs Elyseés has historically held a place near the top of the list. Expatriate buyers from the Middle East and Asia view the Champs Elyseés as the prime Parisian location and will pay up for it. In 2015, it was found that values have risen almost 54% in 5 years. However, for this arrondissement, we believe this came off a very distressed base.

L’Odéon area of the 6th was less expensive, potentially due to the residents’ perception of it as noisier as and busier than other areas. Compared to other quartiers, it is still highly valued nonetheless. There has been hardly any change in 7th arrondissement prices over the past 5 years. The 6th arrondissement near Monnaie is next and has shown similar patterns to the 7th; priced at 13.240/m2 and has seen almost no change in the past 5 years.

In other words, at its worst, good apartments in the best quartiers did not lose their value while the rest of the world was tanking. This is the reason for our mantra that we believe in buying in the absolute best locations, because they are the least affected when the market turns down.

The Islands of Paris are unique due to their unmatched location in the center of Paris, their history, beauty and scarcity value. For example, there are very few apartments or homes on Ile de la Cite’ because of the large plots taken up by Notre Dame, the beautiful hospital Hotel Dieu, the Conciergerie, Sainte Chappelle, the Law Courts and Police Headquarters. This means the few apartments can easily sell for € 30,000/m2 or more. As the other sought-after neighborhoods, they retained their value during the 7 year itch.

Recently, a 4th floor, unremodeled apartment on Place Dauphine – without an elevator — sold for over € 25,000/m2 in the space of a few days.

If you’re seriously interesting in buying in Paris, below is an important chart. It shows the extremely high variance of values by arrondissement.

For example, seven arrondissements have prices per square meter above 10,000€: the 1st, 3rd, 4th, 5th, 6th, 7th, and 8th. These neighborhoods are very central in Paris. The most expensive arrondissements are the 1st and the 6th at 11,740€/m2 and 12,320€/m2 respectively. The only quartier under 7,000€/m2 is the 19th at 6,910€/m2. The 1st arrondissement is not surprisingly one of the most expensive neighborhoods, but it is also important to consider the fact that the 1st arrondissement includes the Islands: Ile de la Cité and Ile St. Louis, also known as kilomètre zéro of Paris, which is highly sought after real estate. 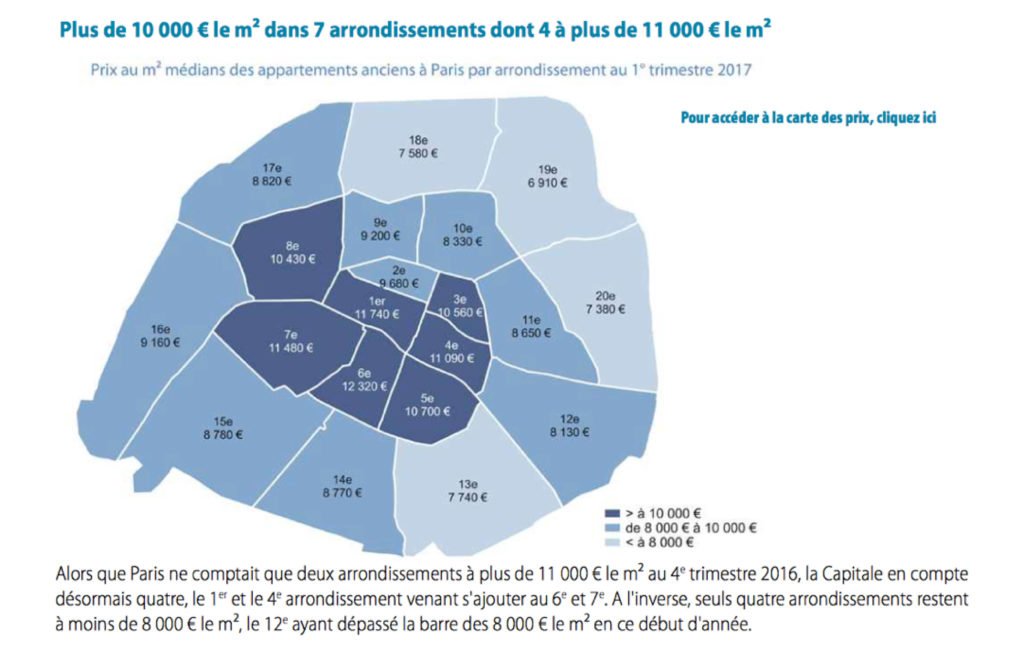 2017: Record Sales Volume — Key Indicator the Market is Moving Up 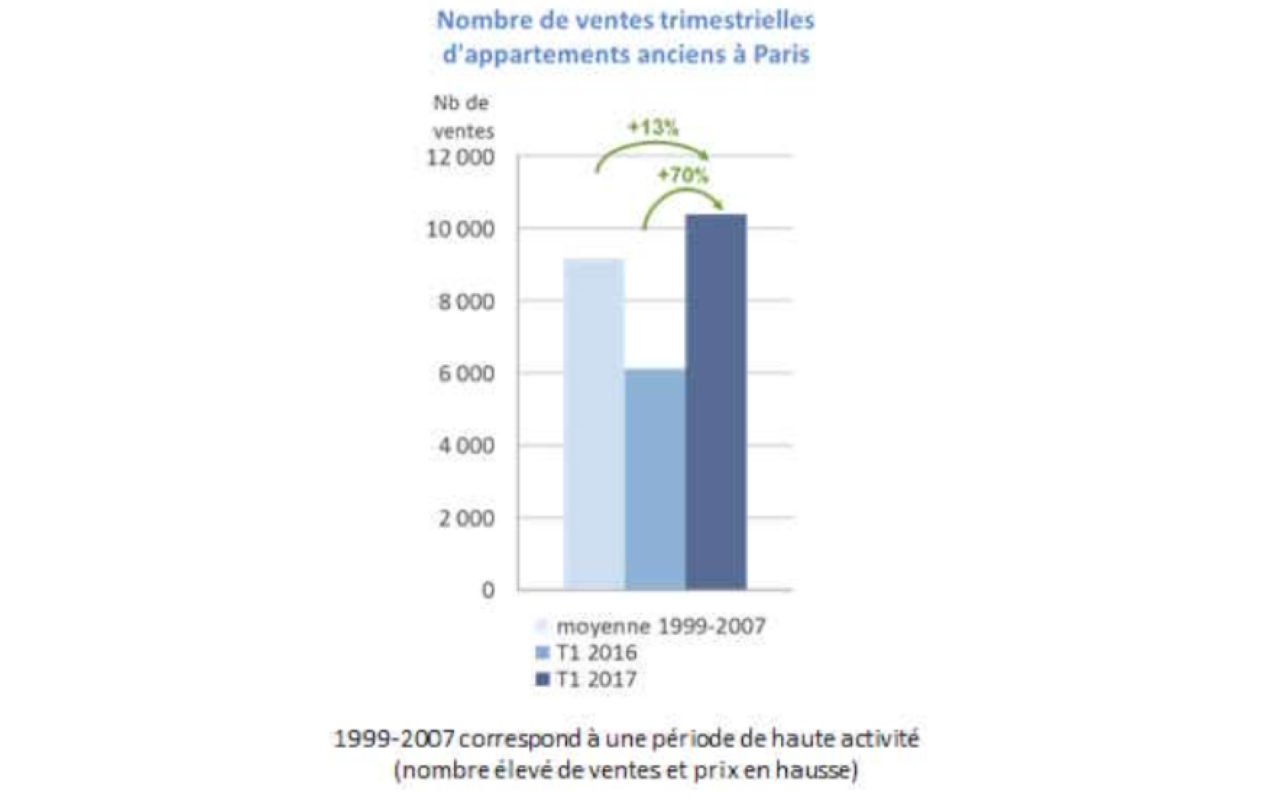 Brexit: A Potential Positive for Paris

Britain’s decision to leave the EU will have many repercussions which are being explored and discovered. One thing is clear, most EU institutions based in the UK will have to move to other cities within the EU, including Paris.

Says one EU spokesperson: “The United Kingdom is leaving the European Union and it will have no say in the location of EU agencies,” said Margaritis Schinas. At least 2 EU agencies employ over 1,000 individuals in the UK, and will definitely move to Europe: the European Medicines Agency and the European Banking Authority.

Paris will certainly be on the list of prime locations for these and other EU organizations.

Peeling Back the Years: In-depth Comparisons

We went back to 2009 compare overall price trends in Paris since 2011. The data wasn’t as complete, but we did notice that the average prices in 2009 marked a low point. The year 2011 shows prices only slightly below 2017’s average, but recovered quickly. On average, Paris prices haven’t changed in six years.

By Arrondissement: There was little historic data available by quartier, but we located a summary showing that the 6th arr. exceeded €13,000/m2 in 2012. So, 5 years later, this arrondissement is almost back to the same level as 2012.

From the end of 201 to early 2017, average prices remained essentially stable at around €8,000/m2, comprising all transactions in the snail of Paris.

Most Expensive Neighborhoods Then and Now

There were no surprises in terms of rankings, although the 2012 average prices were higher for these areas than today’s prices. We believe there is more room for price increases in the most desirable neighborhoods.

Most Sought After Neighborhoods Higher Than Today 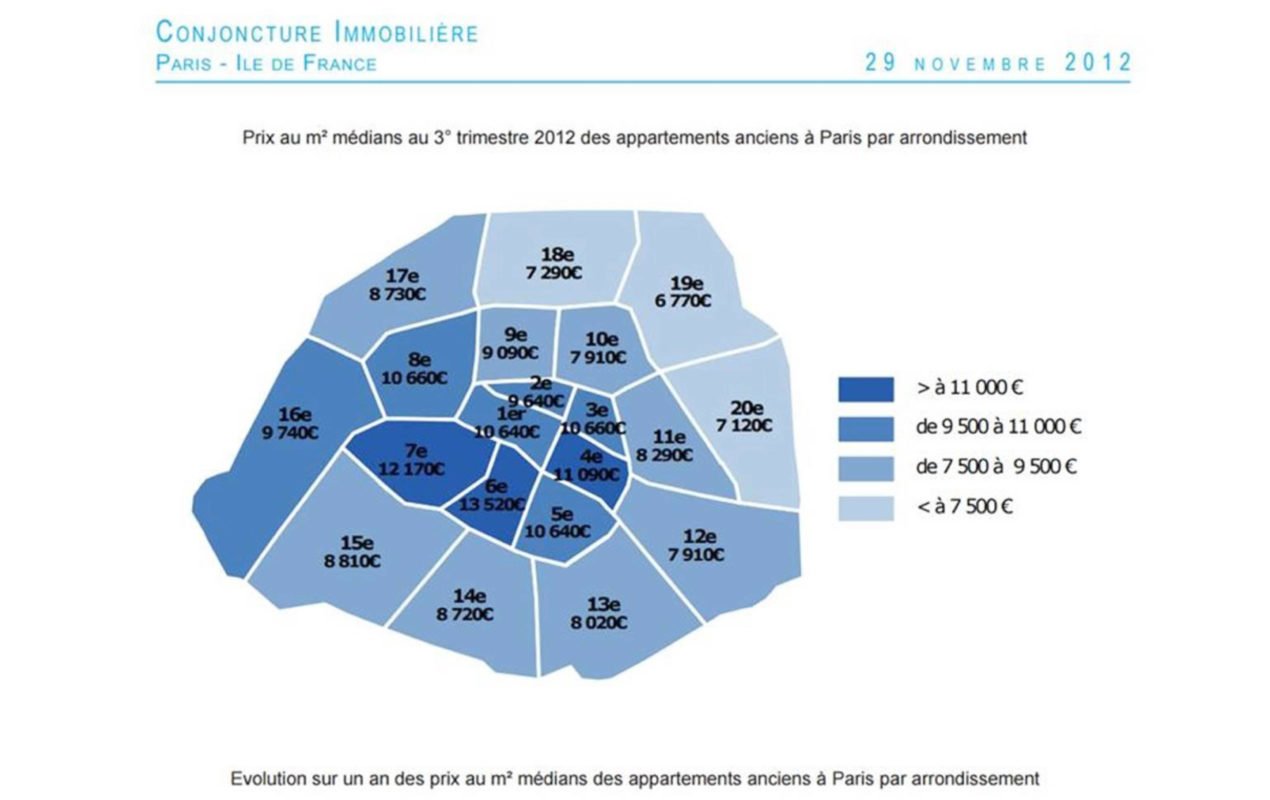 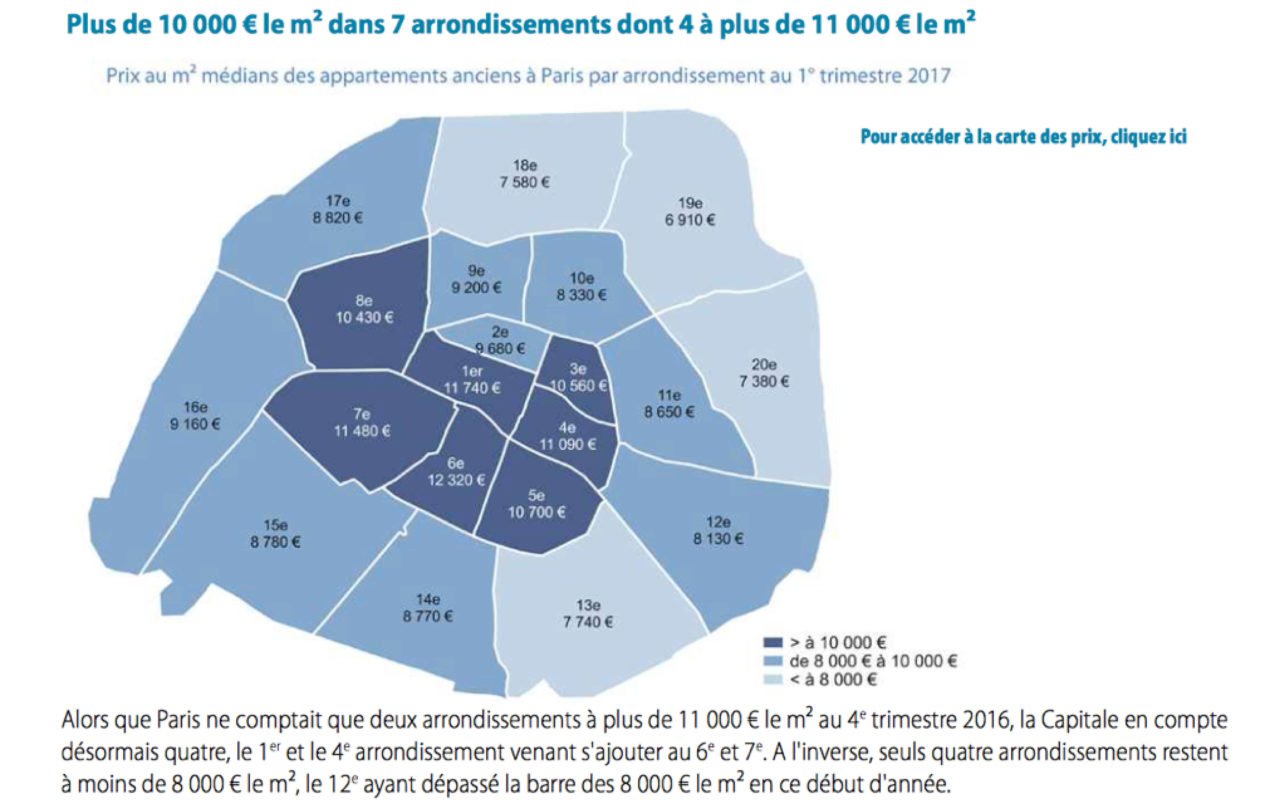 When Did the Recovery Start?

Note the second column; it compares Q3 2010 against the strongest Q3for any quarter in the past. For Paris, transactions are still 9% lower than the last strong quarter – about 10 years previous. We interpret this as room for more recovery both in 2010 and today. 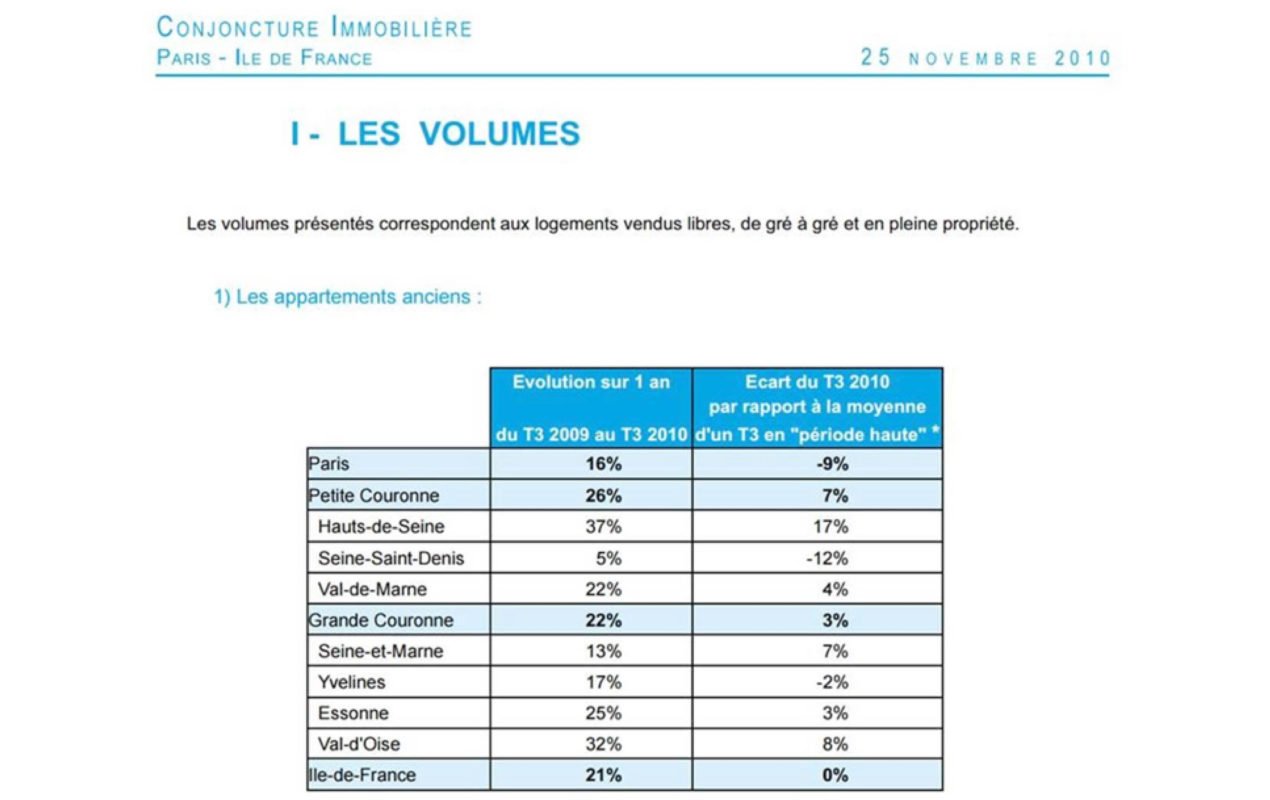 While prices have remained relatively consistent, the prices in the best areas have clearly risen over the past 7 years. However, in 2010, we did see one surprise: the 5th arrondissement near the Sorbonne was marked as the mostly highly priced that quarter. The Left Bank locations in the 6th and the 7th followed.

We like the chart below because it proves our case. In 2010, while the rest of the world was in meltdown, Paris experienced only one small blip downwards in the same period.

Not only were the effects of 2008’s global banking crisis felt a year and a half later in Paris, but there was only a small setback in the last quarter of 2010. Prices recovered quickly and remained steady for 7 years. That ‘7 Year Itch’ is over; demand, sales volume and prices have increased noticeably in 2017 and this trend is expected to continue. 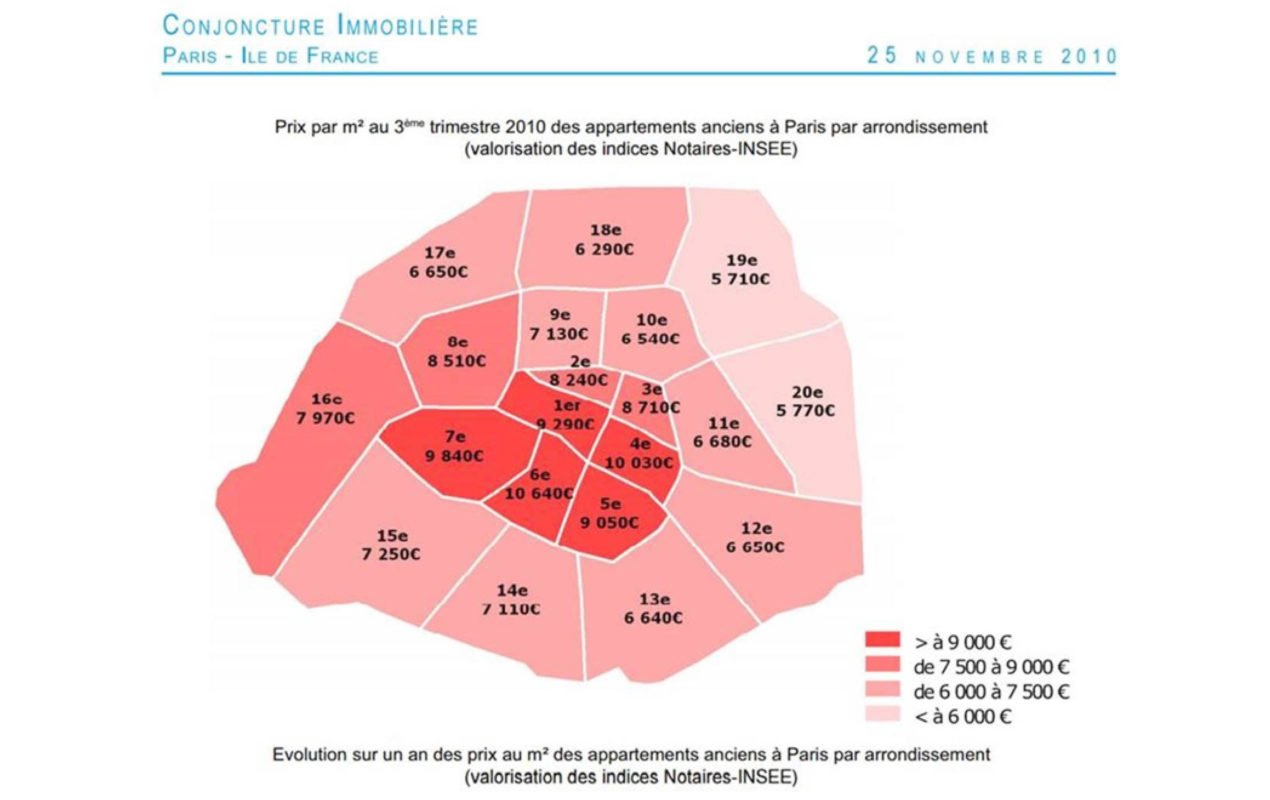 2017 Market Accelerating: When good apartments are priced within the market norms, they sell more quickly than we have seen in two decades. Last week an apartment appeared for sale located near St. Sulpice; 6th floor, elevator, facing the street. It was priced at approximately € 15,500/m2 and needed a complete overhaul. We had our nontaire call and email with a full asking price offer. No ‘conditions suspensivs’, or conditions which would allow buyers to break the sale, such as financing approval. Viewings had been booked for the entire day, but the first client bought it within the first five minutes. For the first time ever, a listing will be published on a real estate site in the morning – only to show a ‘listing has been removed’ message because the apartment was sold within hours.

Posted on Sunday, July 23rd, 2017 at 11:11 pm in Favorite Paris Stories. You can follow any responses to this entry through the RSS 2.0 feed. You can leave a response, or trackback from your own site. 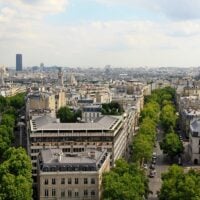 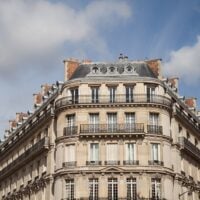 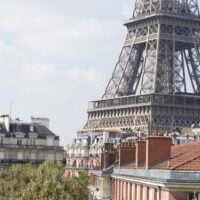