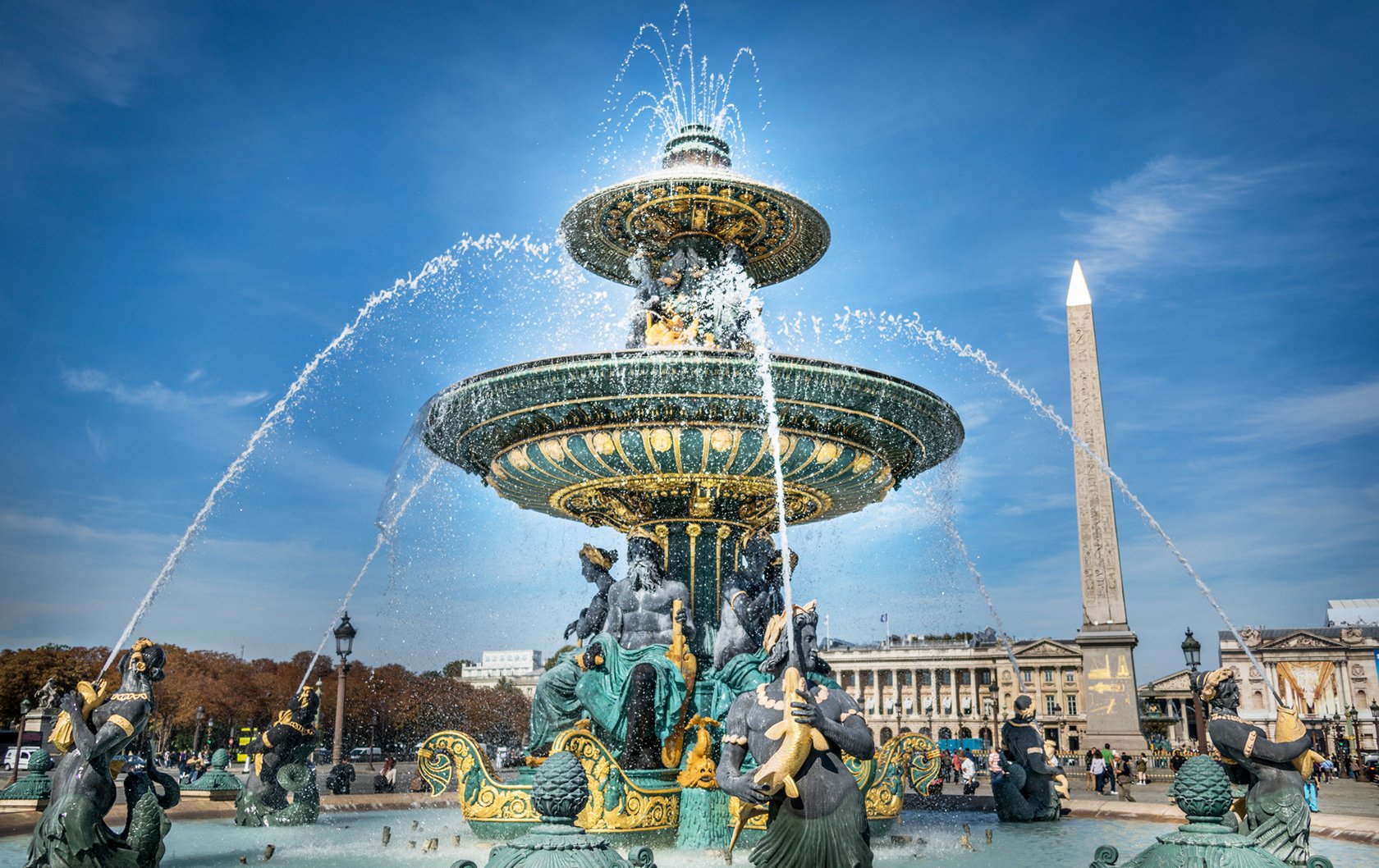 Paris boasts more than 200 fountains, with the oldest dating back to the 16th century. A striking mix of architecture, art and decorative flourishes, they’re sure to turn your head when you’re exploring the city’s delightful neighborhoods. We’ve picked six of the most fantastic Paris fountains, near our Paris Perfect vacation rentals, all rich in culture and history. If you're visiting in the summer, they also offer ideal spots to cool down on a warm Paris day. 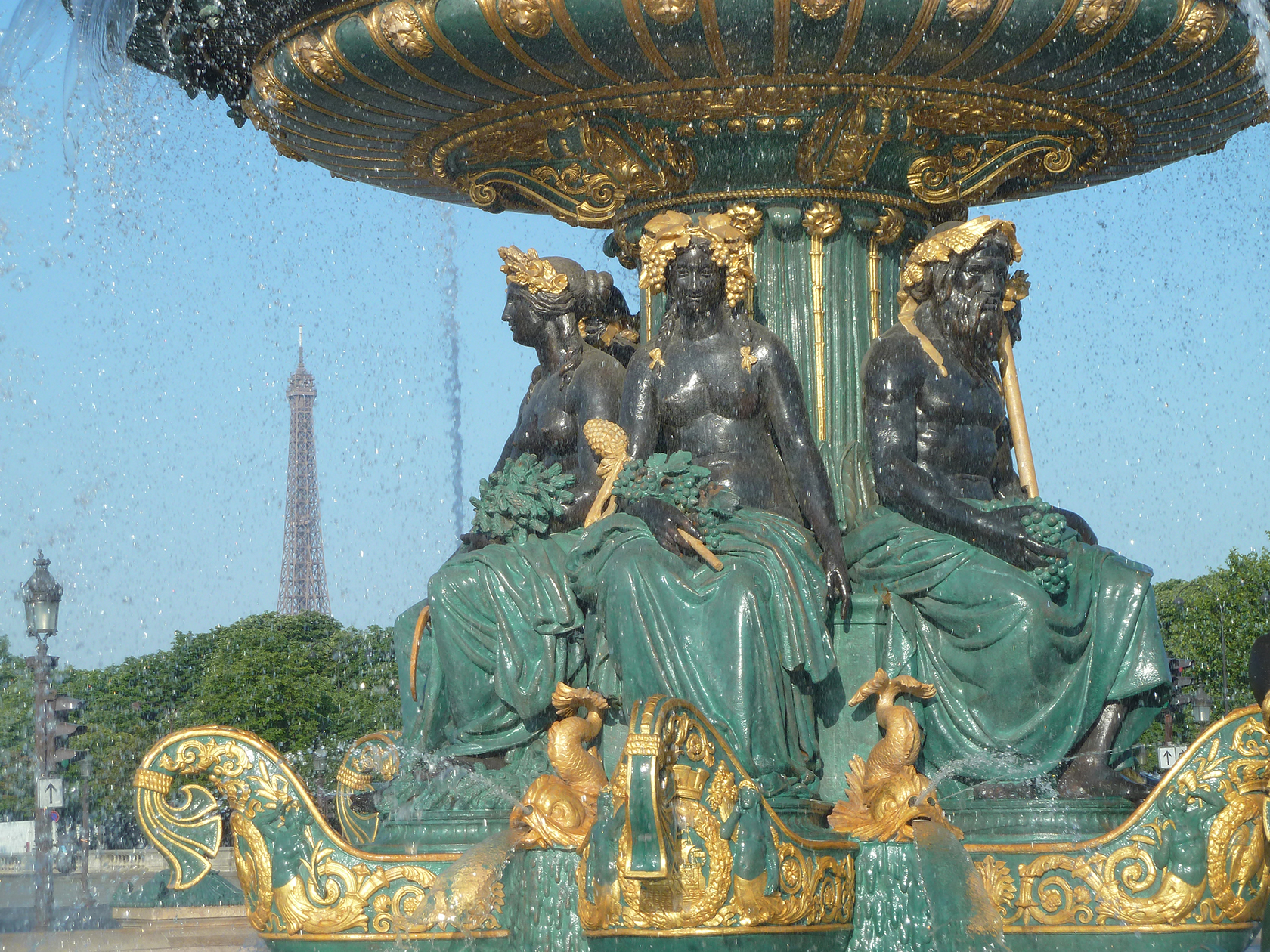 Place de la Concorde with a glimpse of the Eiffel Tower.

Two of the most impressive Paris fountains adorn the Place de la Concorde beside the Jardin des Tuileries. Set either side of the plaza’s Egyptian obelisk, the northern one is called the Fontaine des Fleuves (Fountain of Rivers) and the southern one is the Fontaine des Mers (Fountain of Seas). These monumental fountains were designed by architect Jacques Ignace Hittorff, working with a team of sculptors, and were completed in 1840.

Inspired by a pair of fountains in Rome’s St. Peter's Square, both are classical and ornate. Large figures in the Rivers fountain represent the Rhône and Rhine rivers, celebrating France’s river network. In the Seas fountain, commemorating maritime commerce, key figures represent the Mediterranean Sea and Atlantic Ocean, surrounded by coral, fish, shells and pearls, while a ship symbolizes Paris flanked by dolphins. 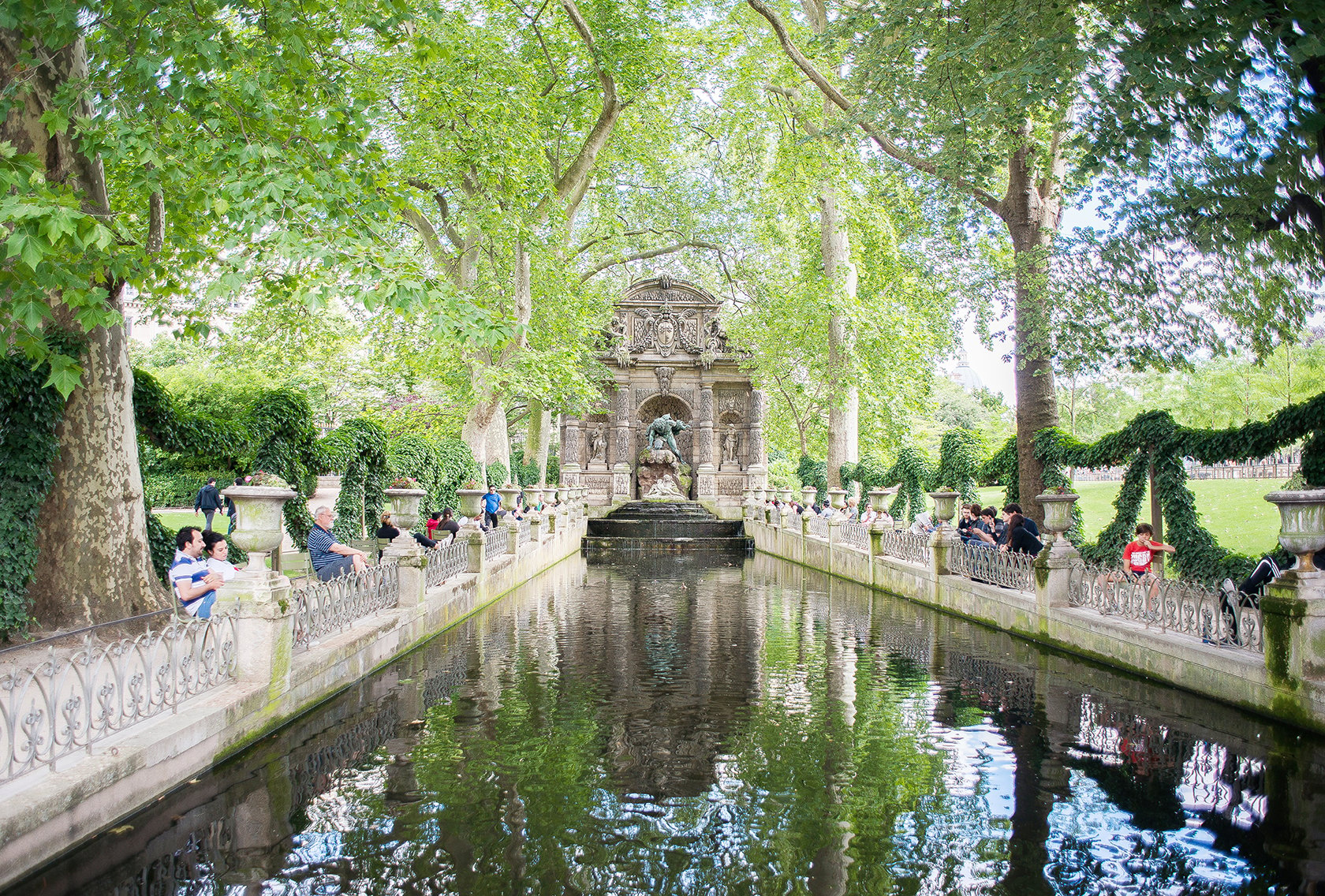 Tranquil moments at the Medici Fountain in the Luxembourg Gardens.

One of the most romantic Paris fountains is the Medici Fountain in the 6th arrondissement, close to the Senate in a quiet north-east corner of the Jardin du Luxembourg. It was commissioned by Marie de’ Medici around 1630 for her palace on the Left Bank (now the Luxembourg Palace), and takes inspiration from Florence’s Boboli Gardens. It was moved to the present site nearby and expanded in 1864 to 1866.

Sculptor Auguste Ottin added the figures from Greek mythology, including bronze cyclops Polyphemus discovering white marble lovers Acis and Galatea. In the myth the jealous giant kills human Acis, so sea-nymph Galatea transforms her dead lover into an immortal river spirit. The long reflecting pool in front is fringed with charming flowers and foliage. Eagle-eyed visitors can also spot a second fountain of Leda and the Swan hidden around the back. 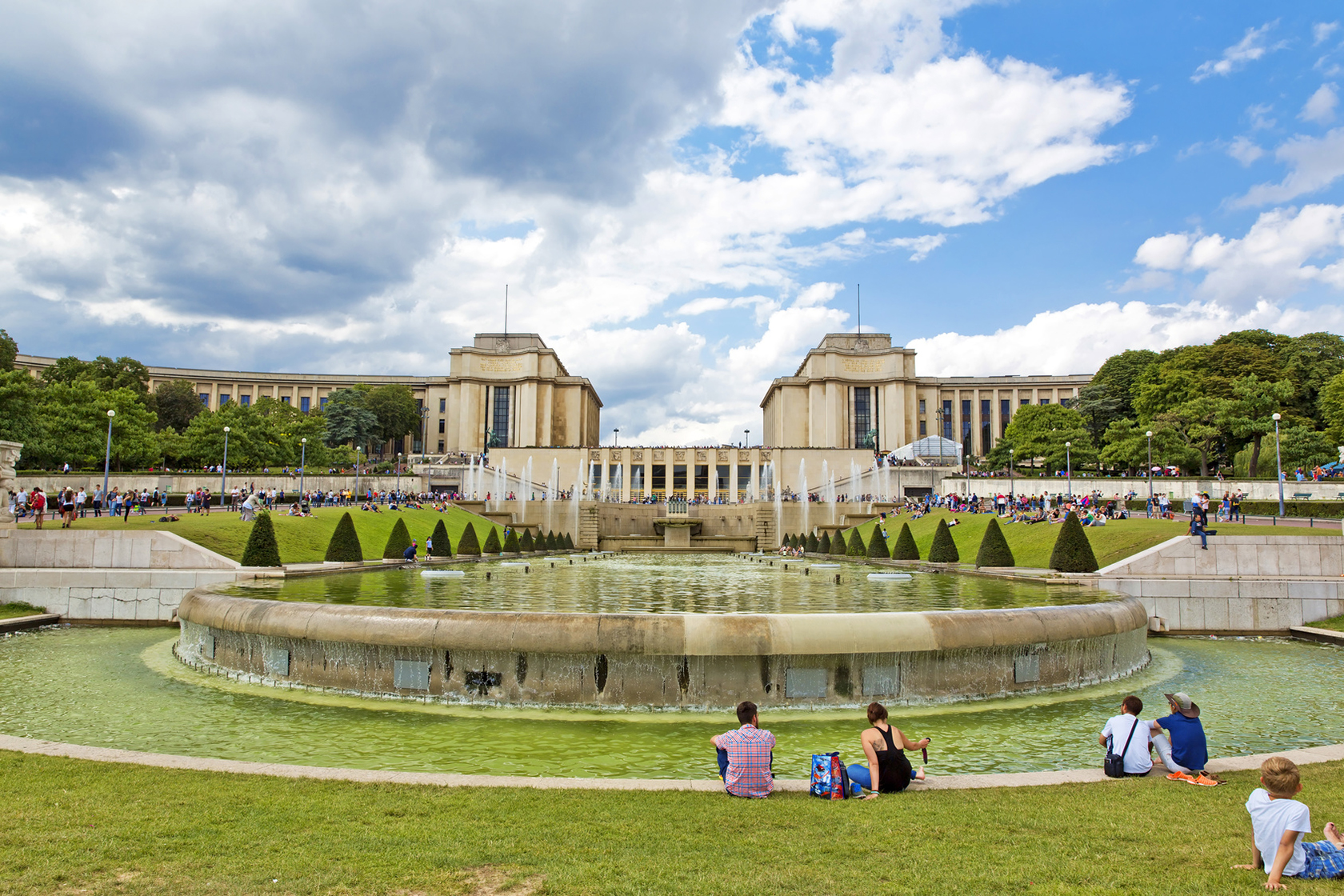 Stroll around the Trocadéro fountains.

The Trocadéro Fountain, or Fontaine de Varsovie (Warsaw), is a massive fountain in the 16th’s Trocadéro Garden. It sits directly across the Seine from the Eiffel Tower, backdropped by the Palais de Chaillot, so makes for great photos. Created for the 1937 International Exposition of Art and Technology in Modern Life, its long, rectangular basin, or “water mirror,” is flanked by 12 fountains generating columns of water 12 meters high; 24 smaller fountains shoot four meters high, with 10 water arches. Twenty dramatic water canons also project water 50 meters in the air. Picnic on the lawn and enjoy the fountain’s cooling breeze and dazzling displays. 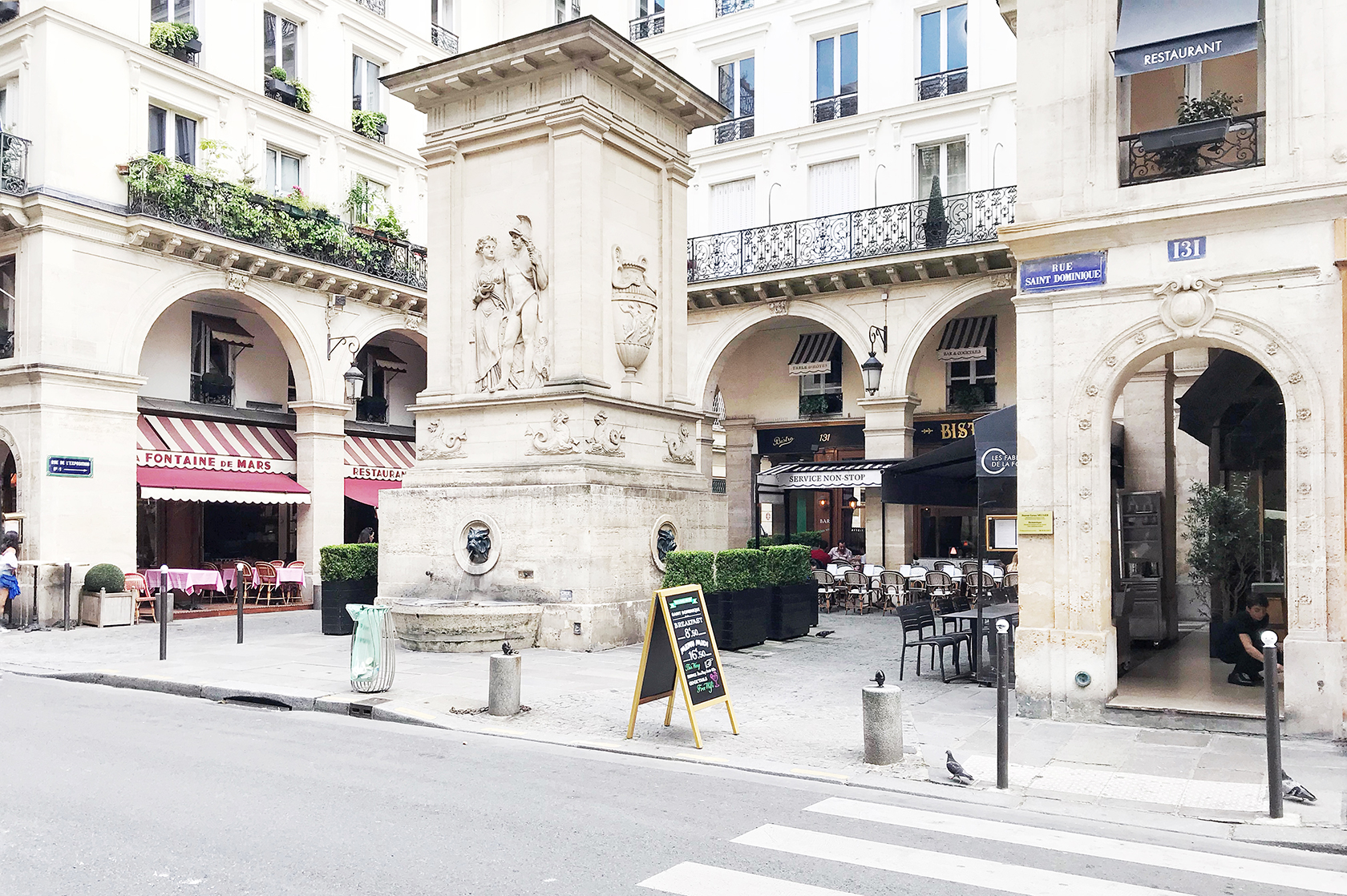 Find out more about this historic fountain near the Eiffel Tower. 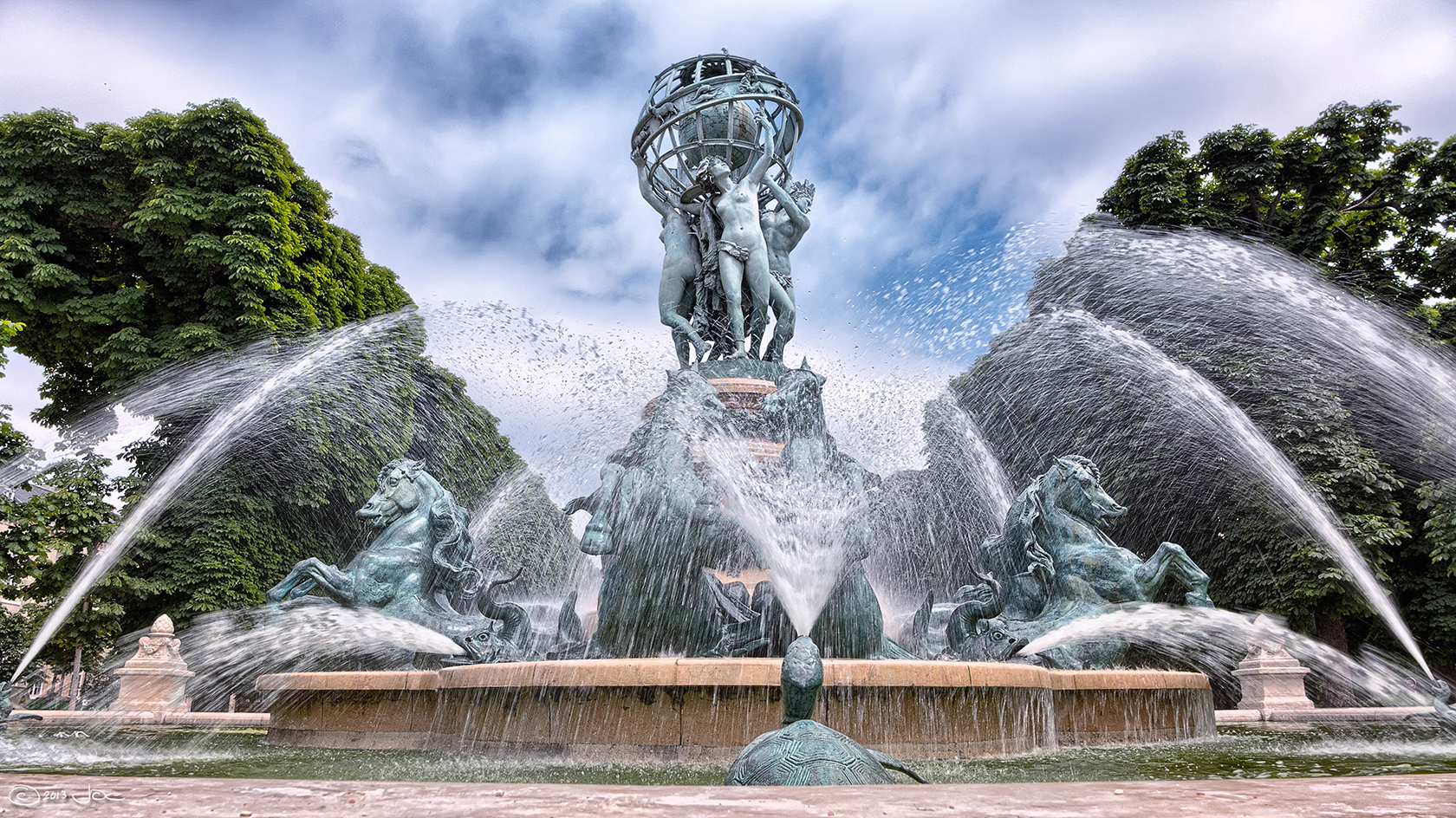 The spectacular Fontaine de l'Observatoire in the Luxembourg Gardens. (credit)

Travelers will appreciate the spectacular Fontaine de l’Observatoire in the 6th district’s Jardin Marco Polo at the south end of Jardin du Luxembourg. Surrounded by eight rearing horses, it’s topped with a globe held aloft by four female statues signifying Europe, America, Asia and Africa (its alternative name is the “Fountain of the Four Parts of the World”). Commissioned by Baron Haussmann, it’s by Napoleon III’s sculptor Jean-Baptiste Carpeaux and was inaugurated in 1874. Details include zodiac signs and turtles spurting water. 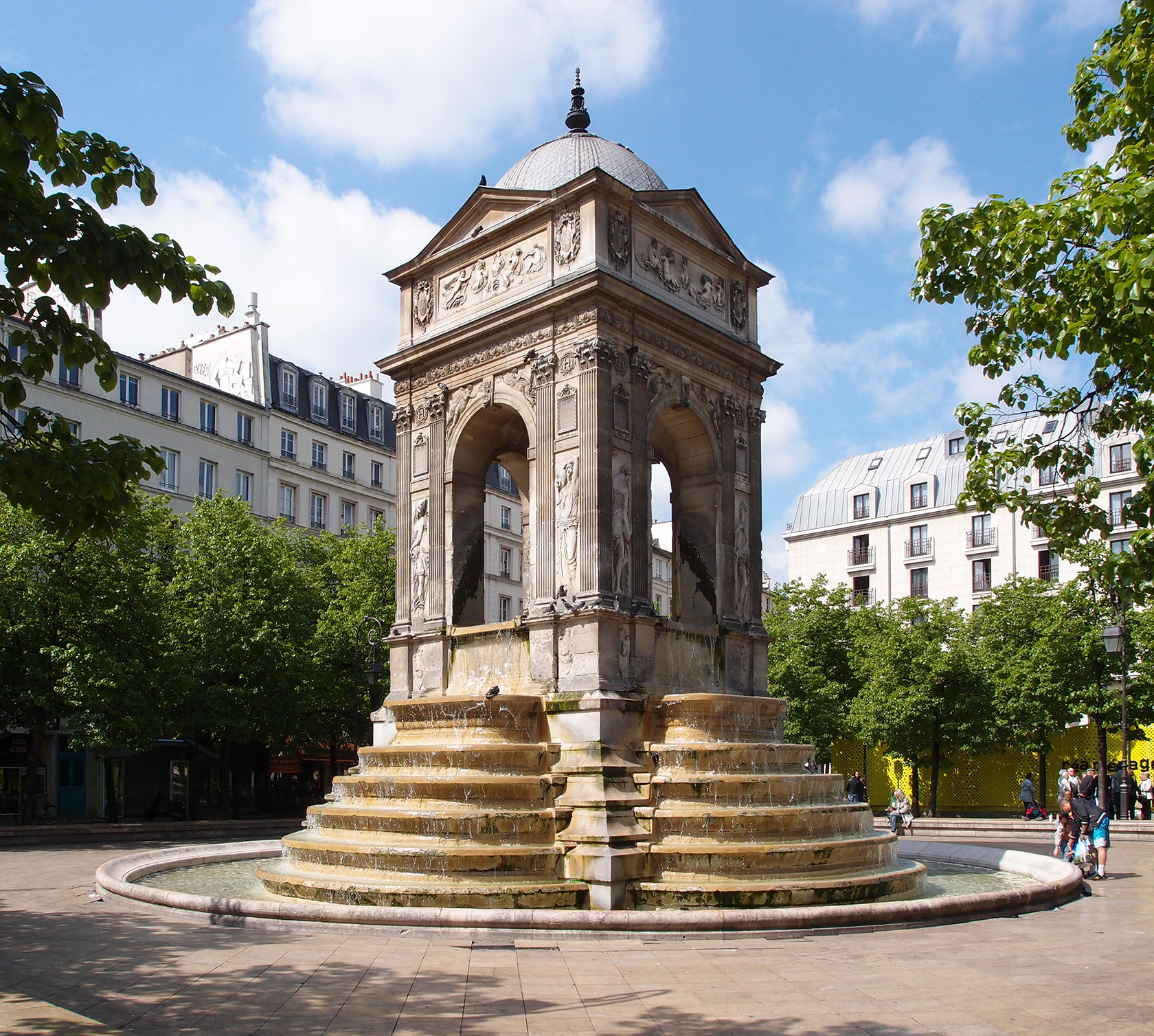 Stop for a rest to admire the Fontaine des Innocents. (credit)

The oldest of Paris’s monumental public fountains, the grand Fontaine des Innocents dates from 1550 and the French Renaissance. It once sat on Rue Saint-Denis, but is now in the sociable heart of Place Joachim du Bellay in the Marais near Les Halles in the 1st arrondissement. Originally named Fountain of the Nymphs, it commemorated Henry II’s entry into the city and was crafted by royal sculptor Jean Goujon. Admire its nymphs and mythical sea creatures while perching on its circular edge. 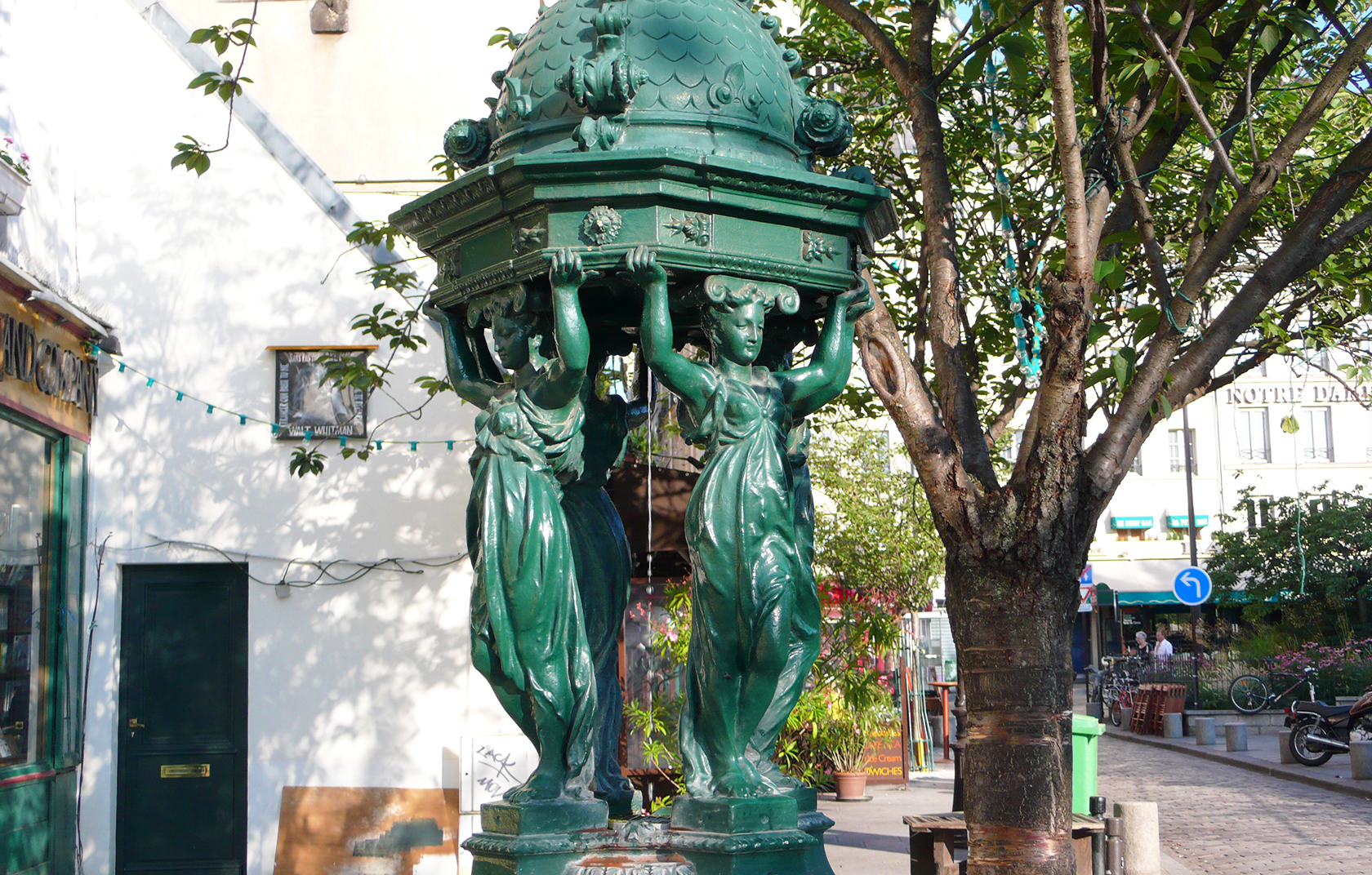 Less fancy but more functional, the city’s 107 Wallace Fountains have been providing Paris with clean drinking water for 150 years. These decorative public water fountains were a philanthropic gift from Englishman Sir Richard Wallace. First installed from 1872, they are mainly made from dark green cast iron. Look out for them on your wanders, take a self-guided tour or just fill up your water bottle.

Posted on Thursday, October 20th, 2022 at 1:14 pm in See & Do. You can follow any responses to this entry through the RSS 2.0 feed. You can skip to the end and leave a response. Pinging is currently not allowed. 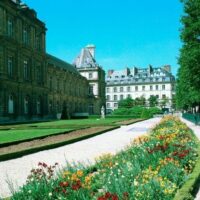 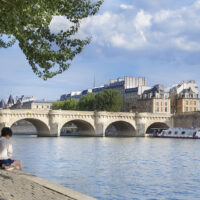 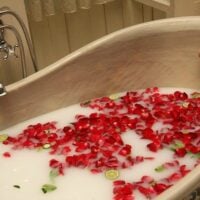 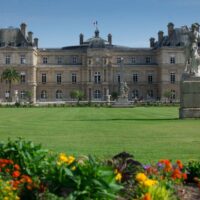 10 Paris Spots Not to Miss During the European Heritage Days