Our enthusiastic team of hot chocolate tasters is back with their second report in our Paris Hot Chocolate Challenge. Their first stop was the famous Café de Flore in Saint Germain des Prés. With top rankings for presentation, service and ambiance, how will their next stop stack up? Mary Ann Grisham is back with the review of the sumptuous Café de la Paix near the Opéra Garnier in the 9th arrondissement.

We found Café de la Paix quite by accident. We had planned a self-guided tour of the Palais Garnier one crisp morning, and when we arrived at the beautiful opera house, we were told to return in one hour as rehearsals were underway for an upcoming production and we could not be allowed in. Slightly disappointed, we wandered a bit around the area and then noticed directly across the street the attractive Café de la Paix. Admiring the gorgeous exterior, we approached the front door and to our delight, we were invited in, shown into a large dining room and given a prime seat by the window overlooking the Palais Garnier. Café de la Paix interior is luxurious and elaborate, in the style of the French Second Empire, with soaring columns, ornate moldings and breathtaking ceiling frescos. The cafe opened in 1862 and its proximity, directly across the street from the Palais, attracted famous patrons, including Jules Masseret, Emile Zola, Guy de Maupassant and the Prince of Wales, who became King Edward VII of the UK. The Café is the full service elegant restaurant for the five star Le Grand Hotel Intercontinental, with numerous dining rooms, a summer terrace, oyster bar, and an upscale family friendly, although pricey €82, Sunday brunch. In researching the Café de la Paix story, I came across this charming bit of history on their website:

In 1898, on a sultry summer afternoon, a regular customer by the name of Oscar Wilde witnessed a strange phenomenon: the street had just been watered down and a light mist was rising from the ground. Suddenly, within the fog forming across the square, he saw a golden angel appear, who kept growing and growing… This caused much excitement… Women fainted… Tables were knocked over… Was this a miracle? Not at all. It was the golden allegorical character perched atop the Opéra that was actually reflecting the sunrays into the mist, and it was its image floating in the middle of the square! The sumptuous interior of the Café de la Paix in Paris

While we did not see golden angels rising in the mist, we viewed this slight delay in our plans as a perfect opportunity to indulge, so we ordered hot chocolate!  It was served piping hot in silver pots with sugar cubes on the side along with a pitcher of cream. The chocolate was very thick and strong. I sweetened mine a bit with a sugar cube and thinned it some with the cream, creating a near perfect concoction that became my new favorite. The pot easily filled two cups and would be perfect for sharing.

Although the service was not as friendly as at Café de Flore, it was efficient. I found it hard to leave such a beautiful room and luscious chocolate and vowed to return. Keep in mind, when it’s time to pay, you are paying for the luxe Café atmosphere and stunning view of the Opéra as well. If you have the time, feel free to linger as you will not be rushed here. There is so much to see in this area…in addition to the Opera, you’ll find the Fragonard Musee de Parfum at 9 Rue Scribe, which offers free guided tours through museum housed in a 1860 Napoleon III townhouse, and of course a gift shop filled with delightful Fragonard fragrances, soaps and toiletries. You can also enroll in the hands-on 90 minute Parfum Apprentice Workshop, where you will create your own signature fragrance to take home with you.

The area is a shopper’s dream with many specialty stores at all price points, the grand magasins, Galeries Lafayette and Printemps, and a large Apple store just a few blocks away.

Warning: Be on guard for pickpockets near the Opéra area…several in our group were approached by a woman holding out a “gold” ring, asking if we’d dropped it in the street. Don’t fall for this old ruse. Just waive your hand, avoid eye contact and keep walking.

Posted on Tuesday, November 20th, 2012 at 4:04 pm in Food & Drink. You can follow any responses to this entry through the RSS 2.0 feed. You can leave a response, or trackback from your own site. 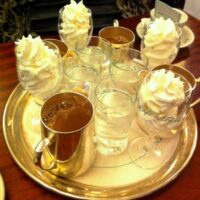 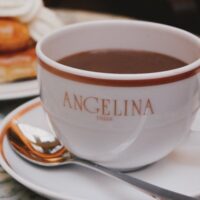 4 Parisian Drinks to Warm You Up This Winter 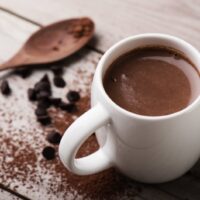