See Paris on a tour in an iconic Citroën 2CV

Touring around Paris in a vintage Citroën 2CV is literally like flying under an umbrella. When Pierre-Jules Boulanger, the director of Citroën (who also happened to be a rather tall man), asked his engineer to design a car that was small in size but big on space for a tall man wearing a tall hat, the concept he described was that it should be like having four wheels under an umbrella.

The result was the iconic bubble roofed Citroën 2CV (deux chevaux meaning two horses); cars that are so inimitably French—racy, stylish and full of cheeky joie de vivre—that they can almost be considered the motorized equivalent of the can-can, the famous cabaret dance performed at the Moulin Rouge.

And, just like the can-can, the colorful 2CV is a tourist attraction in its own right…and just as likely to elicit giggles, rib-poking and surreptitious photo-taking from gawking tourists.

“Being in these cars, it is like being a star!” exclaims our chauffeur Therese (a cuter-than-cute brunette wearing a jaunty blue kepi, navy blue slacks and nautically-striped Breton seaman's sweater, all designed by French clothing company Saint-James) as she gives her beige 2CV a loving wipe-down. These delightful cars are quickly becoming as synonymous with the streets of Paris as the gondolas are with the canals of Venice. They already hold a special place in the hearts of the French, who are just as likely to snap photos of a passing deux chevaux as a tourist. In fact, a deux chevaux was the first car that Paris Perfect's founder Philippe ever owned.

Therese provides a brief introduction to our 2CV (whom I immediately decide to christen Gaston), opens the sturdy passenger door (a raw sheet of metal that reminds me of those roll-back lids you find on sardine tins), and we wedge ourselves into the back, bouncing along the red quilted seats, tuck our knees up firmly under our chins, and with a grinding of gears and a joyous cry of “We're off!” from Therese, we rush headlong into the roaring traffic in front of the Opéra Garnier. Gaston feels like a toy surrounded by the modern SUVs, motorcycles and roaring public buses of Paris, but he can hold his own with his compact size and zippy maneuverability, his little engine whirring determinedly as Therese weaves between an angry bus and a black SUV stuck in a snarl of traffic near the abandoned relic of La Samaritaine, a grand old Parisian department store.

“Oh, la la!” Therese exclaims as the SUV honks aggressively, infuriated that our retro upstart is leaving such a sophisticated model in its wake.

The canvas roof of Gaston is open and the back seat is exposed to the rushing cool air, the warm spring sunshine, and the potent cocktail of city sounds and smells. We hear the hum of tourists milling around the Louvre Pyramid, the roaring traffic on the bridge near the Pont Neuf, inhale the aroma of fresh baguettes from a boulangerie behind the Place des Vosges where Victor Hugo penned Les Miserables, and feel the chill of the shadows as we bump along the cobbled backstreets of the Rive Gauche, where the streets are so narrow that the buildings seem to lean over the road. Enjoy stopping to see the best sights in Paris

Therese is just as entertaining as the information she provides. She points out an old medieval house in Le Marais in the 4th arrondissement, and slows down for us to take pictures (“They kill me maybe,” she murmurs with a worried glance into her rearview mirror where a large Peugeot is cooling its heels right against Gaston's back bumper). We zoom past the Bibliotheque Forney dating from 1475, still riddled with a large bullet hole that it acquired during the French Revolution, where Therese suddenly breaks off mid-description to point out a large fluffy cat reposing in the front basket of a bicycle (“Ooh, the cat! I love cats!”) and as we pause along a shady side street to take pictures of the Roman Arena, a car blasts its horn and she cries chidingly, “Oh la la, un moment, s'il vous plait!”

Therese's infectious laugh bubbles into the air along with Gaston's whirring engine, and it occurs to me that this is the most fun you could ever have driving around the streets of Paris.

Book a tour in Paris in a classic Citroën 2CV!

Posted on Tuesday, May 27th, 2014 at 2:34 pm in Paris Tours & Services. You can follow any responses to this entry through the RSS 2.0 feed. You can leave a response, or trackback from your own site. 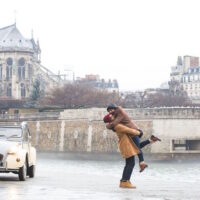 Paris from the back seat of a 2CV 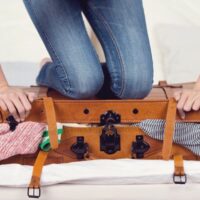 Flying Back to the US – What Do I Bring For The Family?

One Mom, One Son, One Twizy Car in Paris … Nightmare on the Champs-Elysées! 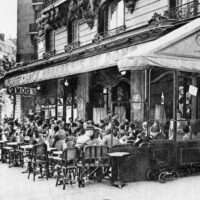 One Response to “Flying Under an Umbrella in Paris”