Inside the Boulangerie: Baguettes & Other Delights 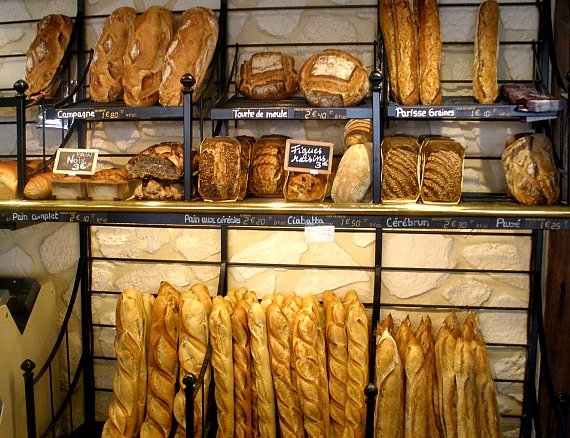 Ah, is there anything sweeter than a Parisian boulangerie?

La boulangerie, or bakery, is central to French life. So important is its role that the French voted la boulangerie their “favorite place of business.” It’s no surprise why. Where else can you find such a bounty of delectable goods that are so eye- and palate-pleasing?

Bread has its natural place at the French table. 83% of the population makes a daily visit to their neighborhood bakery, sometimes going twice a day in order to have the freshest baguette possible. You won’t find many French people subscribing to a no-carb diet; bread is not viewed as empty calories, but rather as an essential part of every meal. A buttery croissant at breakfast or a toasted sourdough tartine topped with smoked ham and melted cheese at lunch? Yes, please! This is a culture which views the la boulangerie and all of its wares as a valuable part of its gastronomic heritage.

When searching for your perfect loaf, you’ll want to make sure that you patronize an artisanal bakery, identified by the emblem Boulangerie Artisanale. This means the bread is made from scratch on site. The bakers are not bringing in frozen dough filled with artificial ingredients mass produced in a far-away factory.

If you see this going on, you know you are getting the real thing: 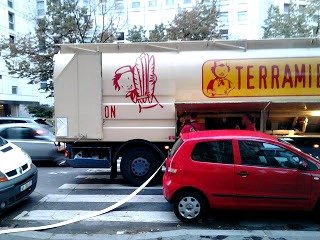 That sleeve? It is funneling flour from the truck straight into the bakery’s bins, where the baker will transform it into lovely loaves. 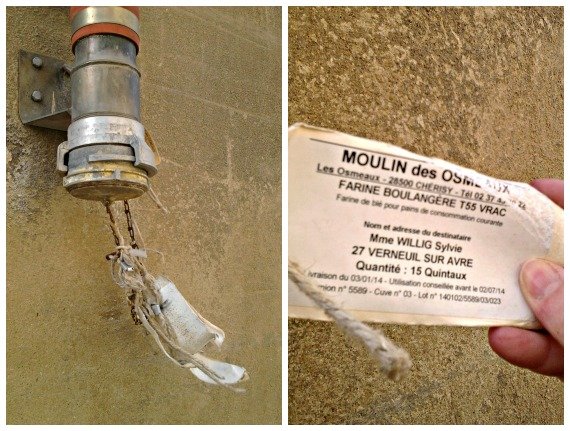 The sleeve attaches to this pipe, which is tagged with the name of the bakery and the quantity of flour the bins can accommodate. This shop can take 1,500 kilos of flour.

While the baguette represents 70% of a typical boulangerie’s sales, and certainly is its showcase product, it would be a crime to not dig deeper when visiting Paris and try out some of the other wonderful offerings that grace the racks of even the smallest bakeries.

But let’s start with the classic baguette. You can buy it in half-portions (ask for a demi-baguette if you are dining alone) and you can specify how crispy you’d like it (ask for bien cuite if you like a deeply crunchy crust, or pas trop cuite if you like your bread a little softer). If you truly crave a product that is more crust than dough, you’ll want to try une ficelle (literally, a string) or a flûte. Some boulangeries sell these with bits of bacon or spicy sausage baked into them which makes for an excellent snack-on-a-stick. Fancy a larger bread? Pick up a bâtard or the simple pain which weighs in at 400 grams, compared with the baguette which weighs a standard 250 grams.

More and more bakeries are offering elaborate breads which incorporate into the dough dried fruit such as figs, black currants or raisins, or loaves sprinkled with seeds and grains, sea salt, even chocolate chips! French boulangeries offer an impressive diversity in flours used, each giving a distinct flavor, heft and even shape to the bread: chestnut, spelt, rye, whole wheat, sourdough … the length of the list is limited only by the baker’s energy and creative ideas.

Looking to try something other than the iconic croissant for your next Parisian breakfast? Why not taste some of the viennoisseries? A chausson aux pommes (literally, an “apple slipper”), is similar to a flaky applesauce-filled turnover. Or a pain aux raisins, a raisin and cream-infused spiral of deliciousness. How about a small bag of choquettes, a light ball of puff pastry rolled in over sized morsels of sugar? A croissant aux amandes is a heavenly combination of almond paste, powdered sugar and toasted almonds, all nestled happily inside a croissant. Each of these treats will complement perfectly your café au lait or chocolat chaud.

Whatever you choose in your boulangerie, remember to always greet the staff with a friendly “Bonjour Madame, bonjour Monsieur.” You will want to avoid paying for your purchases with a large bank note. A “Merci et au revoir Monsieur, Madame” is also appreciated and will guarantee good service on your return visit.

(Image Credits: Phil Beard, All other photos by author)

Posted on Tuesday, May 6th, 2014 at 10:51 am in Food & Drink. You can follow any responses to this entry through the RSS 2.0 feed. You can leave a response, or trackback from your own site.

The Best Bread & Cheese in the Latin Quarter! 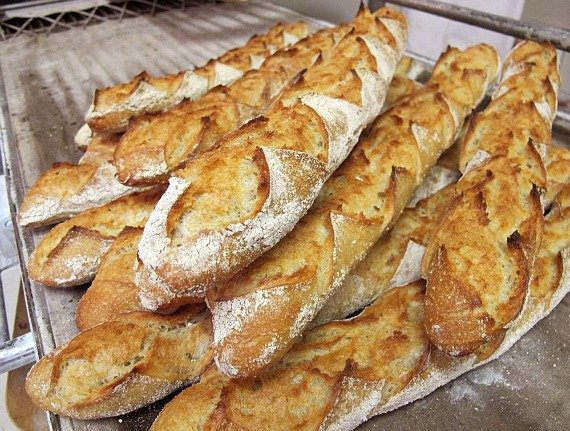 One Response to “Inside the Boulangerie: Baguettes & Other Delights”