Braving The Catacombs And The Dark Underworld Of Paris

Labyrinthine subterranean passages, chilling tales of macabre carryings-on and spooky anecdotes of bones transported across the city. As Halloween approaches, what better time of year to take a deep breath and plunge into the depths of the sinister Catacombs, sixty feet below the surface of the bustling Parisian streets? Avoid the eternally long lines, and join us for an intrepid visit to the largest necropolis in the world.

The Catacombs: a popular Paris attraction

It is a blissfully autumnal day above ground when I arrive for our skip-the-line Catacombs of Paris guided tour, so that makes me feel just slightly better for the hordes of people patiently waiting to buy their tickets. The queue is almost right around the block – sightseers beware – especially if you are on a tight schedule. The Catacombs is one of the most visited attractions in Paris with over 500,000 tickets issued per year, however, only 200 visitors are allowed inside the maze below at one time. Be sure to contact us to reserve your guided tour well in advance (as entrance dates are limited), especially if time is of the essence and you want to spare yourselves what could otherwise be an everlastingly ghoulish wait.

As our expedition begins, the ambiance is suitably solemn. All bags are carefully checked on the way in, and we are told that they will also be scrutinized for bones on our way out, as a visit to the ossuary can apparently bring out light-handed criminal tendencies in some of its visitors. Unofficial ‘souvenir-collecting’ is deeply frowned upon, and the atmosphere is decidedly guarded as we begin our 131-step descent down a narrow winding staircase to the murky darkness 20 meters below. 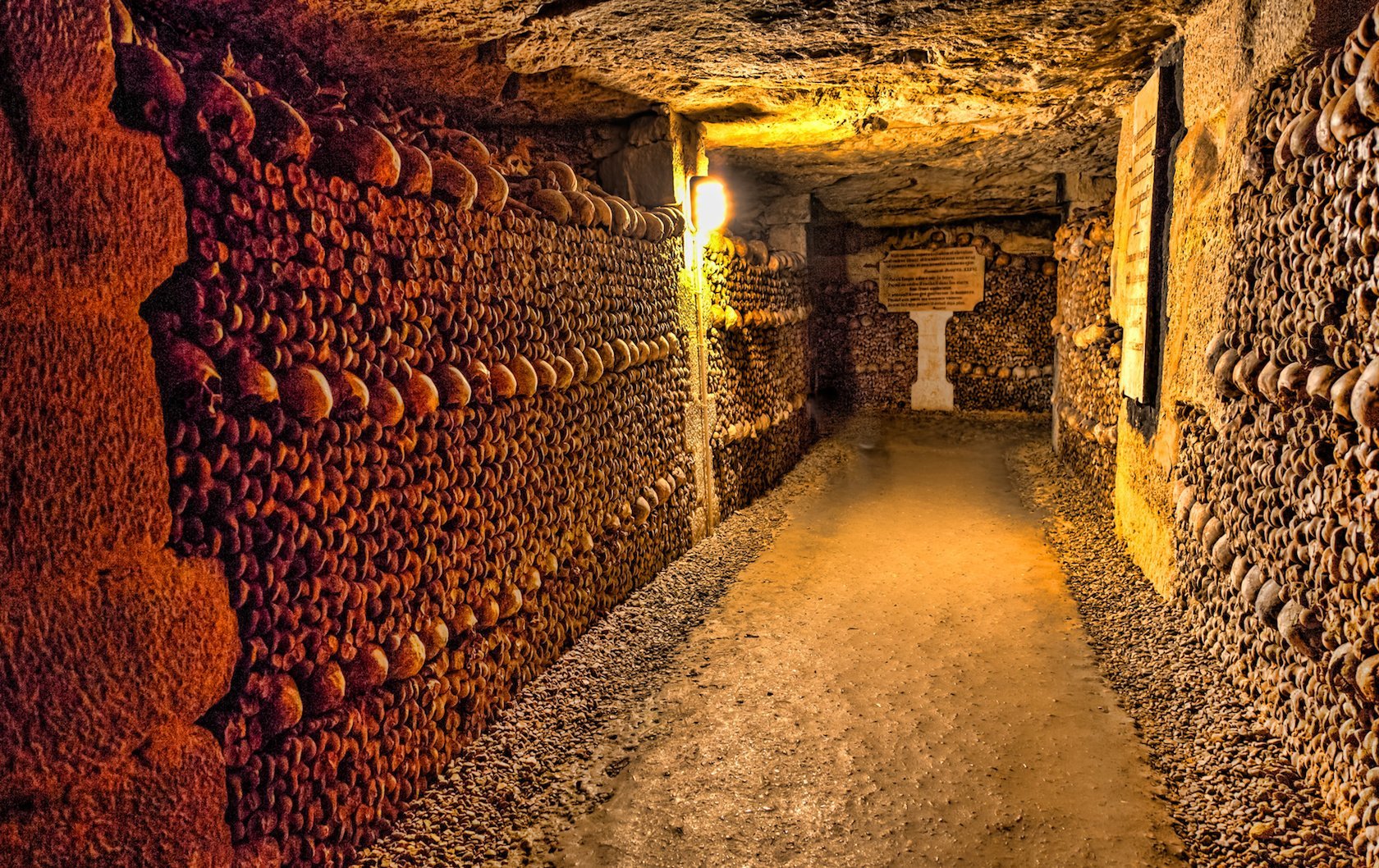 Tales of the unexpected

Deep below the metro lines, the six million bones that we have all heard so much about are located in the former limestone quarries from which the city was built centuries ago. There are over 200 kilometers of uncharted territory underneath Paris, and while it is clear that no one is going to get lost during this tour, the atmosphere is charged from the get-go. A wrong turn in the past has led to people becoming disoriented in the dark and being unable to find their way out to see the light of day. We shiver at learning the grisly fate of doorkeeper Philibert Aspairt from 1793, who erroneously entered a staircase from the nearby hospital where he worked. His body was discovered some 11 years later, identifiable only by the key hanging from his belt.

Before passing through the engraved gateway into the chillingly named “Empire of Death”, we are entreated to eerily visual descriptions of the horse-drawn carriages of the 18th Century, stealthily clip-clopping their way over the bridges of the Seine in the dead of night. These ghostly funeral processions were accompanied by incense-burning priests. They transported the innumerable corpses and skeletons housed in the over-populated and disease-ridden mass grave cemeteries over at Les Halles, depositing the bones in their new resting place. 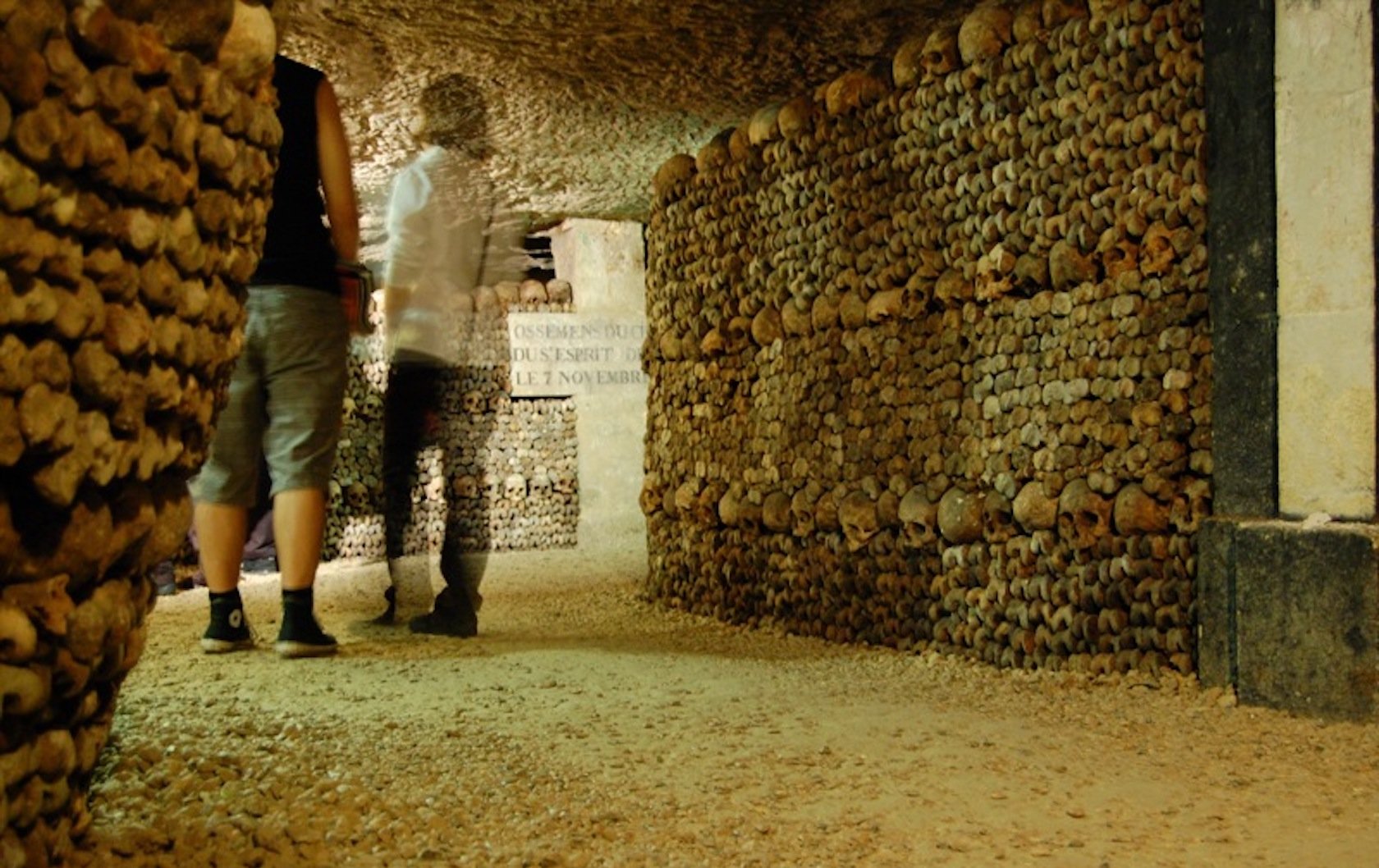 Entering the necropolis, nothing can quite prepare you for the vision of millions and millions of skulls, femurs and unidentifiable skeletal parts. Tightly packed and often presented with a quite astonishing attention to detail, you cannot help but be aware of how surreal it is to be passing through these chilly, damp corridors, where time has stood still for so long. It feels like being in a time capsule, and it is faintly unnerving to imagine the scattered bones of French revolutionaries such as Robespierre and Marat lying alongside wall upon wall of their fellow citizens – and just conceivably those too of the ill-fated Marie Antoinette. The guillotine reportedly beheaded a staggering 17,000 people in 18 months, and the massacred remains were brought to repose here in a fascinating yet cadaverous show of deadly skull and crossbones.

Spine-tingling stories abound of ghosts spotted lurking in the shadows and of modern-day urban explorers or ‘cataphiles' who secretly and illegally comb the tunnels out-of-hours. We learn about the discovery of a fully equipped cinema and tales of orchestral happenings in days of yore. The visit is fascinating, and the beauty of attending a privately guided tour is that the doors are also unlocked to off-limit underground tunnels, that are closed to the general public. We were able to go safely off the beaten track and glimpse hidden limestone sculptures, bottomless wells and the altar-piece where the last rites were given to the poor corpses arriving from Les Innocentes across the city, before climbing our way back upstairs to the comforting fresh air and bright sunshine outside in the real world. Trick or treat – move over – this is creepy, year-round. 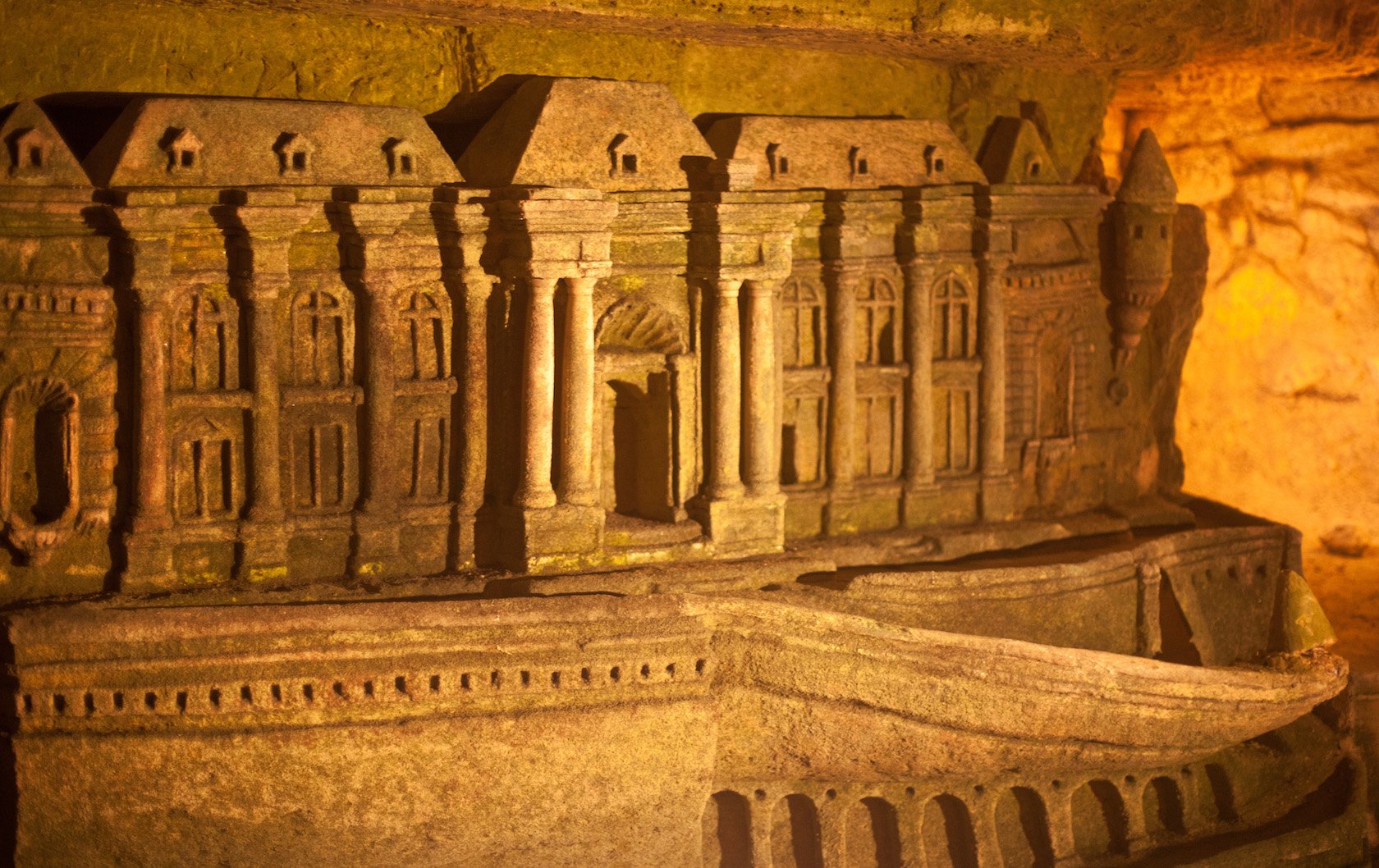 Book now for an alternative vision of the Paris you definitely won’t see above ground, and take a look at the Dark Side of Paris walking tour – with more tales of murder, mayhem, and mystery at ground level to follow…

Please note that after the initial impact, it was surprising how quickly our group became accustomed to the vision of all these countless body parts. The visit is not for the faint-hearted as it covers some three kilometers, with the temperature kept at a constant 57°F. We advise you to dress accordingly, wear sensible walking shoes and bring some bottled water with you. You have been warned!

Posted on Thursday, October 26th, 2017 at 5:56 am in Paris Tours & Services, See & Do. You can follow any responses to this entry through the RSS 2.0 feed. You can leave a response, or trackback from your own site. 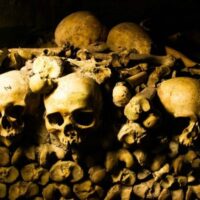 Five Thrilling Things to Do in Paris this Halloween

Skip the Lines at the Louvre Museum with Easy Pass Tours 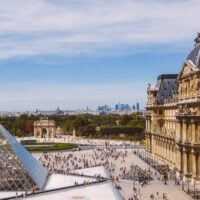 Expert Advice: How to Skip the Tedious Lines at the Louvre!