The holiday season in Paris isn't complete without a visit to see the Christmas window displays at the Grand Magasins on Boulevard Haussmann near the sumptuous Opéra Garnier in the 9th arrondissment. Much like the anticipated Christmas windows at Macy's, Bloomingdale's and other famous department stores in New York City, the windows at Printemps and Galeries Lafayette are a magical part of Christmas in Paris. We think each year that they couldn't get any better, but every year we're wowed by the creative designs and festive windows designed by some of the world's top names in fashion. This year the Christmas windows at Printemps feature enchanting scenes created by Christian Dior while Galeries Lafayette is celebrating 100 years of the beautiful Art Nouveau glass dome with “The Ball of the Century” window displays created by Louis Vuitton and favorite Disney princesses. It's a whimsical and fabulous Christmas with Printemps and Galeries Lafayette … come along and take a look! Beautiful details with the “Poupettes” created by Dior for Printemps

Christian Dior has created an enchanting world of fashion – in miniature – for the gorgeous Christmas windows at the Printemps department store in Paris. Stepping up to the window it's easy to get lost in the magical scenes featuring very fashionable dolls, or “Poupettes” as Dior has called them, which are wearing replicas of classic Dior designs. Each one of the 74 dolls has been created at Christian Dior's Haute Couture workshop at their headquarters on Avenue Montaigne in Paris. The settings are whimsical and fun – absolutely captivating to all the visitors crowding along the streets to take a peek! A charming ice skating scene in the Printemps Christmas windows

We loved the ice skating scene in one of the windows at Printemps with the Poupettes skating around a pretty setting against a backdrop of Parisian landmarks. Look closely and you'll spot the entrance to Printemps in the backdround! And look even closer … one of the Poupettes must be new to ice skating, because she has taken a tumble and doesn't look too pleased about it at all! Oh no … one of the Poupettes has fallen on the ice!

There are also larger scale window displays with Dior's gorgeous designs in Christmas reds and glittering golds. The windows are sumptuous, whimsical and visually stunning. If you're in Paris this Christmas, don't miss the chance to see these marvelous designs by Christian Dior! Each window was more spectacular than the next, especially the one in sparkling gold and silver with beautiful Dior dresses, a leopard, chandeliers and a tiered table filled with shimmering items on display. Other window displays have whimsical scenes with Poupettes wearing miniature recreations of iconic Dior designs – down to the tiny Lady Dior handbags and hats! These windows were absolutely charming – capturing the whimsy of a child's fantasy with the elegance of Dior. With a spritz of one of Dior's famous perfumes you might just be whisked away to this magical world for Christmas this year! Classic Dior designs in miniature in the Printemps Christmas windows!

Inside Printemps you'll find an exclusive collection by Christian Dior created for Printemps for the holidays, which includes silk scarves, snow globes featuring some of the Poupettes from the holiday windows and a charming advent calendar. Visit the Dior Pop Up boutique at Printemps to find out more!

Galeries Lafayette – The Ball of the Century with Disney & Louis Vuitton Cinderella ready for the Ball of the Century at Galeries Lafayette!

Next door at Galeries Lafayette the Noël du Siècle – Christmas of the Century – is taking place in celebration of the store's beautiful glass dome, which is 100 years old this year. Louis Vuitton has created the Ball of the Century in celebration, and of course where there's a ball … there must be Princesses! Many of the Christmas windows have been transformed into magical settings for Disney Princesses, including Cinderella, Belle, Rapunzel, Sleeping Beauty and Snow White. The Cinderella window was one of the most popular with children … of all ages! There's also the chance to see Cinderella's carriage, which was surrounded by children captivated by the enchanting setting. Cinderella's carriage inside Galeries Lafayette is a popular photo spot this Christmas, and will be at the store only until December 31st, 2012. Stop by the store before then for the chance to take a photo with this magical backdrop! Rapunzel dressed for the Ball of the Century – complete with Disney's magic! The Beauty and the Beast inspired Christmas window was one of our favorites at Galeries Lafayette. Centered around Belle's beautiful yellow ballgown, you'll also spot some of the beloved characters from Disney's animated version of the classic fairytale. Look … it's Mrs. Potts, Chip and the cute teacups! All our favorite characters from Disney's Beauty and the Beast at Galeries Lafayette!

Louis Vuitton's wild and whimsical Christmas window displays for Galeries Lafayette celebrate the Ball of the Century and feature the luxury fashion house's designs along with a parade of exotic animals and figures from a marching band with instruments and pom poms. They are striking images for sure! This dancing panda surrounding by Vuitton's iconic luggage was one of our favorite Vuitton Christmas windows at Galeries Lafayatte. Although, we couldn't get enough of the cute penguins. Now these are some penguins with serious fashion sense if you ask me! Penguins with very fine taste in fashion at Galeries Lafayette!

If you're in Paris for the holidays this year, we highly recommend doing some window shopping along Boulevard Haussmann at Galeries Lafayette and Printemps. Head inside for fabulous Christmas shopping, too! If you visit, please do share your favorite Christmas windows in Paris in the comments below or on our Paris Perfect Facebook page. We'd love to hear from you!

Posted on Wednesday, December 12th, 2012 at 6:43 pm in Paris Events. You can follow any responses to this entry through the RSS 2.0 feed. You can leave a response, or trackback from your own site. 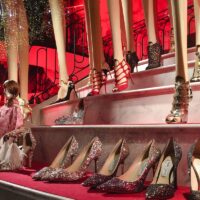 The 2016 Holiday Window Displays Have Arrived! 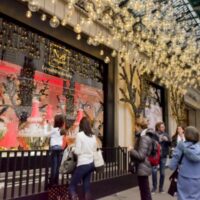 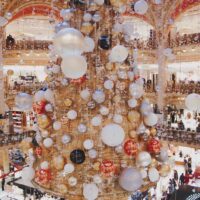 Christmas in Paris: Things to do to during the Holiday Season 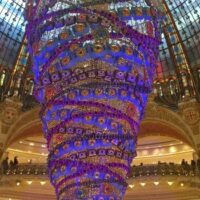