What can you do with a 1970 paperback titled “Spirit – The Administration”? Instead of throwing it out, remove the front and back cover and turn it into a decorative touch!

One of the neighbors next to the Cognac apartment was a constitutional lawyer who has now retired. While we've never been inside, her apartment was literally overflowing with dusty books and documents on French law. How do we know this? Because over the past year, she has boxed up thousands of these books and left them on the common landing until someone eventually removed them. Removed the dusty old covers and sorted the piles by size

Two big boxes appeared again last week. I was curious and intrigued. What could one do with the Parliamentary updates from 1974 onwards, when all of this information is now accessible and indexed on line today? Or Divorce Law in the Congo (in French)? Or Legal Rights Among Minorities in Hungary? Hum … not exactly a big audience out there. I quietly sorted through the boxes and made several piles. Then I braced myself and tore off the covers (it's so hard to do that to books!) and tied them with ribbon to decorate shelves. Wrap with ribbon or twine and voila' a pretty decoration! These kinds of books are all the rage and are now produced with blank pages. You don't need to spend the money — simply find old books and make your own.

I gave a set to one of our new owners in Paris who joked that she might even read them, but mostly would enjoy the effect in her new living room!

Posted on Thursday, March 13th, 2014 at 5:46 pm in Paris Home Remodels. You can follow any responses to this entry through the RSS 2.0 feed. You can leave a response, or trackback from your own site. 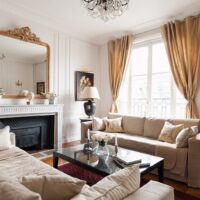 French Design: How to Easily Make Your Home Feel Parisian 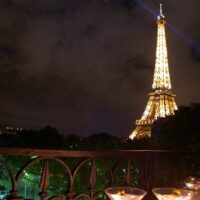 The Merlot Apartment in Paris: Before, After & After Again! 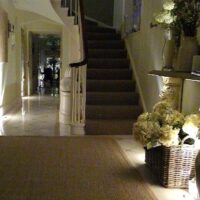