Sweets for Your Sweet in Paris In France, the month of February is all about Valentine’s chocolates and special, seasonal treats. Take crêpes, for example. February 2nd is the fête, or festival, of “La Chandeleur,” or Candlemas. La Chandeleur–from the latin “candelorum,” means candles, but to the average French person, it means: Time to Eat Crêpes! The most commonly-told story behind La Chandeleur is that February 2nd marks the commemoration of the presentation of Jesus in the Temple. The candle part comes in because farmers held lit candles along the procession way. The flame was supposed to ward off evil spirits and protect the fields. There is also a Celtic myth surrounding the cooking of crêpes having to do with the round form representing a sun, and a sacrifice to the divinities so that the wheat crops should be spared and grow well for the upcoming harvests.

You’ll see lots of crepes featured in Paris’ bakeries this month, where you can buy these delicious thin pancakes premade. They will even heat them up for you upon request, should you wish to snack on them right then and there. Crêpes are wonderful all by themselves, or topped with something sweet, such as Nutella or sugar and salted butter. The French like to accompany their crêpe consumption with hard cider, and you’ll notice special displays of cider in Parisian grocery stores all during the month of February. Making your own crêpes is easy in your Paris Perfect apartment, with a mix picked up at the market (“Francine” is a good one) or from scratch. Another February-only treat you will see around town is the “bugnes.” This sweet confection looks like a free-form fritter and tastes like a beignet. (The name comes from the provençal word bunyi, or beignet). It is basically a fried sweet dough, rolled in powdered sugar, and best eaten hot. Bugnes originated in Lyon but thankfully you can now find them sold all over France. This ancient pastry goes back to Roman times, when it was eaten in celebration of Carnival. It was common to indulge in these delicacies before one had to give them up for Lent; now most people don’t link bugnes to any sort of religious event and just enjoy them as a February delight.

Some bakeries will add a bit of lemon or orange syrup to their recipe, but the plain “nature” bugnes are wonderful without any fancy additions, in my opinion. Unlike in the United States, where everybody celebrates Valentine’s Day (children exchange cards with their classmates and parents; employees share candies at work), le Saint-Valentin is something only couples celebrate in France. You will find special heart-shaped chocolates and valentine-themed sweets in the fine chocolate shops such as Jean-Paul Hévin, Pierre Hermé and La Maison du Chocolat, and loads of fancy cakes and candies at La Grande Epicerie. Artisan chocolates, both dark and milk, with edible flower and jewel decorations. Bakery windows show off their pink cakes this month!

You won’t find bags of inexpensive candies to distribute to all your office mates and casual friends such as you would find at a Target. France has not adopted this holiday as a marketing opportunity to that extent. But if you want to take your special someone out to romantic dinner, it is advisable to make a reservation. Here in the most romantic city in the world, Parisians still like to mark Valentine’s Day with what they enjoy best: good food in the company of someone they love, so restaurants fill up fast!

(Image credits: yuichi.sakuraba, Masatsu, all other images by the author)

Posted on Thursday, February 12th, 2015 at 8:35 pm in Food & Drink. You can follow any responses to this entry through the RSS 2.0 feed. You can leave a response, or trackback from your own site. 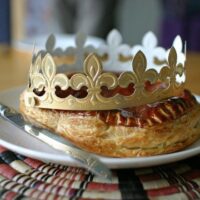 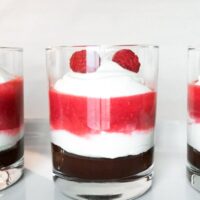 Show Your Love with these Chocolate Raspberry Verrines! 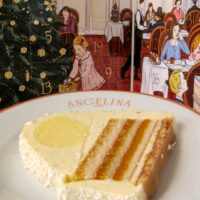 The Best Bûches de Noël of the 2016 Holiday Season! 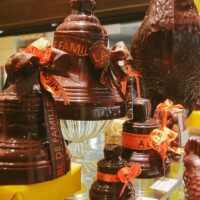 Paris Blog > Food & Drink Sweets for Your Sweet in Paris