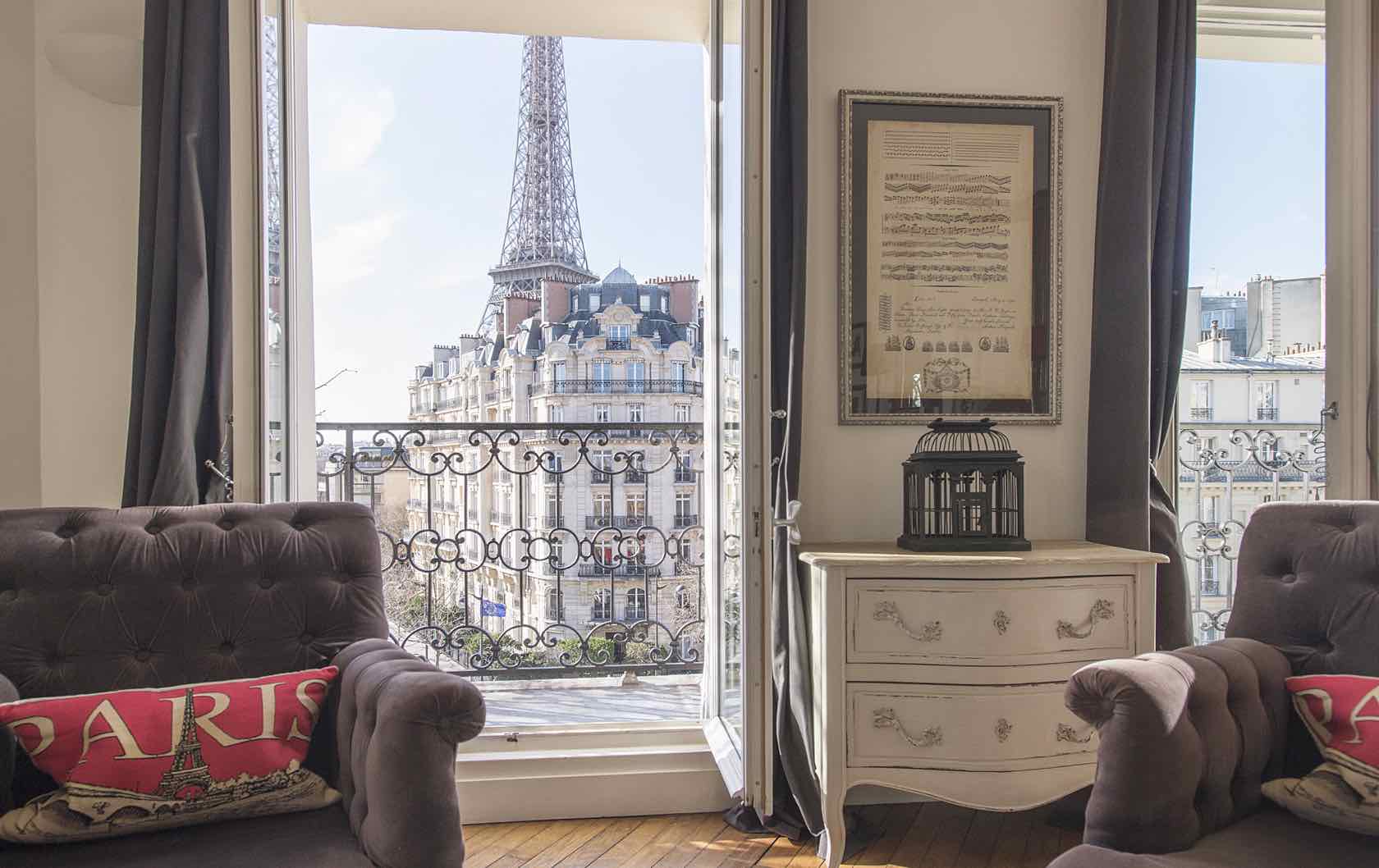 It puts a huge smile on my face to see the look on owners' faces when they walk into their newly remodeled Paris apartment! The story of the Champagne apartment is one of my favorites. It was one of our early Paris apartment remodeling projects, and reminds me of the long learning process of French remodeling — especially training our architects and builders in our space saving ideas and standards.

How it Began: The same woman had been living the apartment since the 1930s. She was the mistress of a successful business person in Paris, who set her up in this “love nest.” She talked about the heady days of the Liberation of Paris and enjoying evenings of wine, women and song with American GIs! The living room walls were covered in fabric, which had inhaled dust and dirt for 30 plus years.

After the owner passed away, the tenant remained for many more years. When she died, the apartment was put up for auction by the French Government to cover debts. It's called Une vente à la bougie, or “sale with a candle,” because centuries ago, a candle was lit when the lot was put up for sale and the candle was blown out when the final bid was made: “Sold!”  It is still lit today!

Note the small window below, originally French doors that had been walled halfway up.  We immediately restored to full size to have three sets of French doors in the living room.

Originally a double bedroom, the back half of the living room was converted to the bedroom. After Living Room: An incredibly sunny apartment which makes this room feel so spacious! This is one of our primary rules for our buyers when looking for an apartment. Make sure it's on a high floor so you capture the sunlight! Restoration: The original parquet floors were restored, fabric and wall paper removed so walls could be stripped back to the original. The window became the French doors on the far left above. The apartment is so naturally sunny and warm that little was needed in terms of decor. This was the living room after we remodeled it the first time. We helped remodel it seven years later with more neutral colors.

The Champagne is often booked year after year by returning guests. One couple said they keep the same routine. Try a new restaurant in Paris each day for lunch and walk home while the sunlight is pouring into this room. The husband takes a nap here and loves waking up to the Eiffel Tower's glow. Opening the doorway from the living to dining room creates a great flow through the apartment. The Bedroom becomes an Open-Dining Room: We converted the original bedroom into an open dining room, combining it with the kitchen. See the french door on the left? It wasn't open originally; it was a trompe l'oeuil showing shutters outside for symmetry. We applied for permission to convert it to a real French door to the City of Paris, but knowing how hard it is to modify facades, told owners there was little chance. Great news when they received permission! 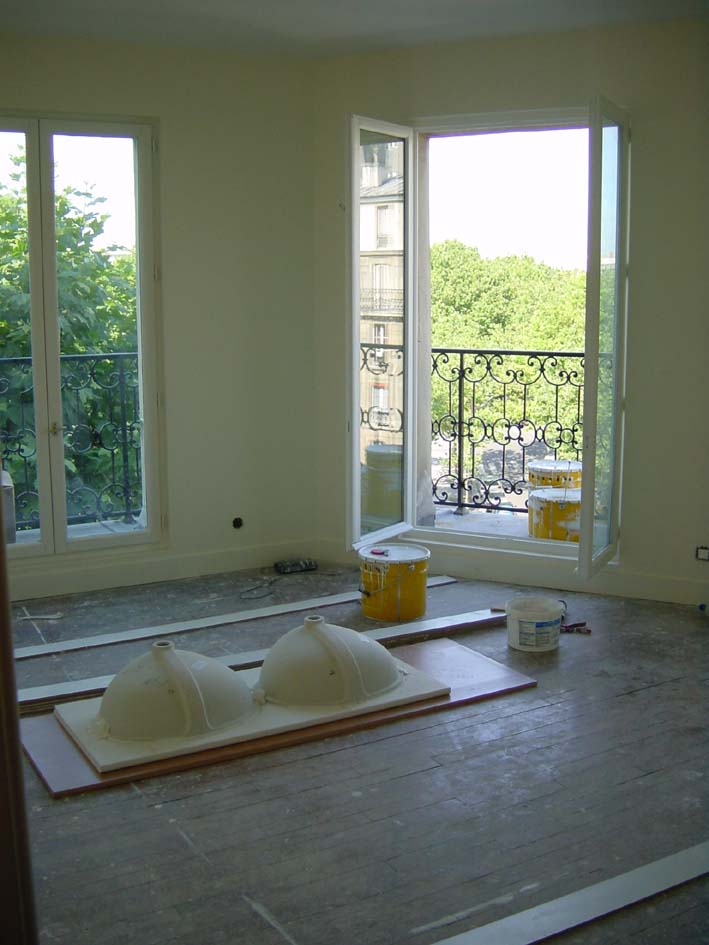 This was the original bedroom. Builders stored the sinks here while completing the shower room.

Open Dining Room and Kitchen: A traditional oak table with taupe brown chairs around. Since the apartment overlooks a spacious intersection, it means there is no direct view into any of the rooms. We asked owners if they wanted us to put shades or blinds and they were right to say no. Guests love watching the day start five stories below in Paris and after lunch as Parisians purchase their evening baguette! Pretty and simple styling are all the room needed! The Kitchen After: The back half of this room was the bathroom below. We convinced our architect to go American style and make this space an open kitchen/dining room. It worked brilliantly… and he now designs open kitchens in all of his apartments — except one for a Russian oligarch nearby who wanted to recreate Versailles. Styles have changed, and we're speaking with the owners about opening up the partition to kitchen in the next update — hopefully late this year.

Before Bathroom: We wondered if the turquoise tiles dated from the 1960s. There was also an exposed gas boiler on right, which had been converted to electric. Kitchen Finished!  Architect thought the owners took a big risk choosing this pink and gray granite, but the pattern and style work brilliantly. Important Building Tip – Check the Water Tank! We had weekly meetings with the builders, which helped us catch problems. It turns out the French don't understand the importance of copious hot water. They installed a tiny hot water heater and tank in the bathroom above the washer/dryer.

When we discovered it, a long argument ensued with our architect. I refused to sign off on the small tank and insisted the American owners would agree. I instructed them to find the largest hot water tank available for residences, to remove a storage cupboard in the kitchen and install it below. Owners were grateful we went to bat for them and insisted the builders find this large hot water tank — no running out of hot water now!

Double Living Rooms – The back Half becomes a Master Bedroom: We discovered a secret behind the back wall, a hidden closet accessed behind the bookcase, which occupied the whole width of the room! This room became the master bedroom with entrance from the main hallway. Carving out the Shower Room from the Kitchen: The kitchen was a tiny poke hole that overlooked the dark inner courtyard.

Training the Builders: In the old days, servants stayed in the kitchens so they were not seen. Happily, kitchens have  become part of family life and open to the dining area, but we had to explain this to the architect who wanted to leave it where it was.

Under the Window – the Piece Froide! With little room, the tenant still used the piece froide or a tiny cupboard on the right under the window, which was used in the 1800s to keep things cold! Shower Room After: Guests and owners love the double sinks as well as the washer and dryer hidden in the closet. We suggested Pierre de Calisa, a French limestone for the counter top and tiles.

Another Building Lesson Learned: The floors were originally tiled in the same limestone. However, limestone is quite porous and even with waterproof treatment, it absorbs water and eventually discolored. In one of our updates, we replaced with a ceramic tile in a similar soft beige. Power Room: In France, toilets are often separated from bathrooms. We remodeled the powder room with gray tiles and a darker geometric marble border.

Building Tip: We boxed in the toilet and created a storage cupboard above.  Nice use of space!

We found the perfect antique marble basin in Italy that was transformed into the sink in the powder room for a truly unique touch! Remodeling a Paris apartment takes passion, patience and a whole lot of experience. Visit the Champagne vacation rental online to see more photos of this beautifully finished and sunny apartment in Paris.

Posted on Monday, March 9th, 2015 at 11:51 am in Paris Home Remodels. You can follow any responses to this entry through the RSS 2.0 feed. You can leave a response, or trackback from your own site. 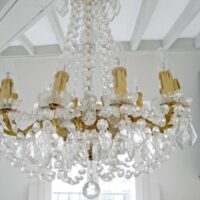 Can This Apartment Be Salvaged? – An Update! 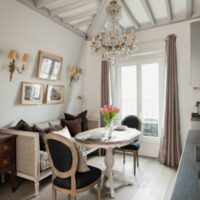 The “Petit Bijou” is Finished! Can You Believe the Transformation? 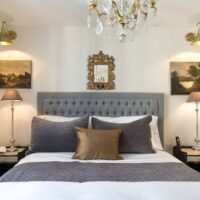 How to Make Your Pillows & Cushions Look Their Very Best!

Buying and Renovating a Paris Apartment: The Saint Pourçain

2 Responses to “Paris Apartment Remodeling: Check out the Champagne!”