A Marvelous Makeover of Cabernet – One of Our Most Popular Paris Apartments! 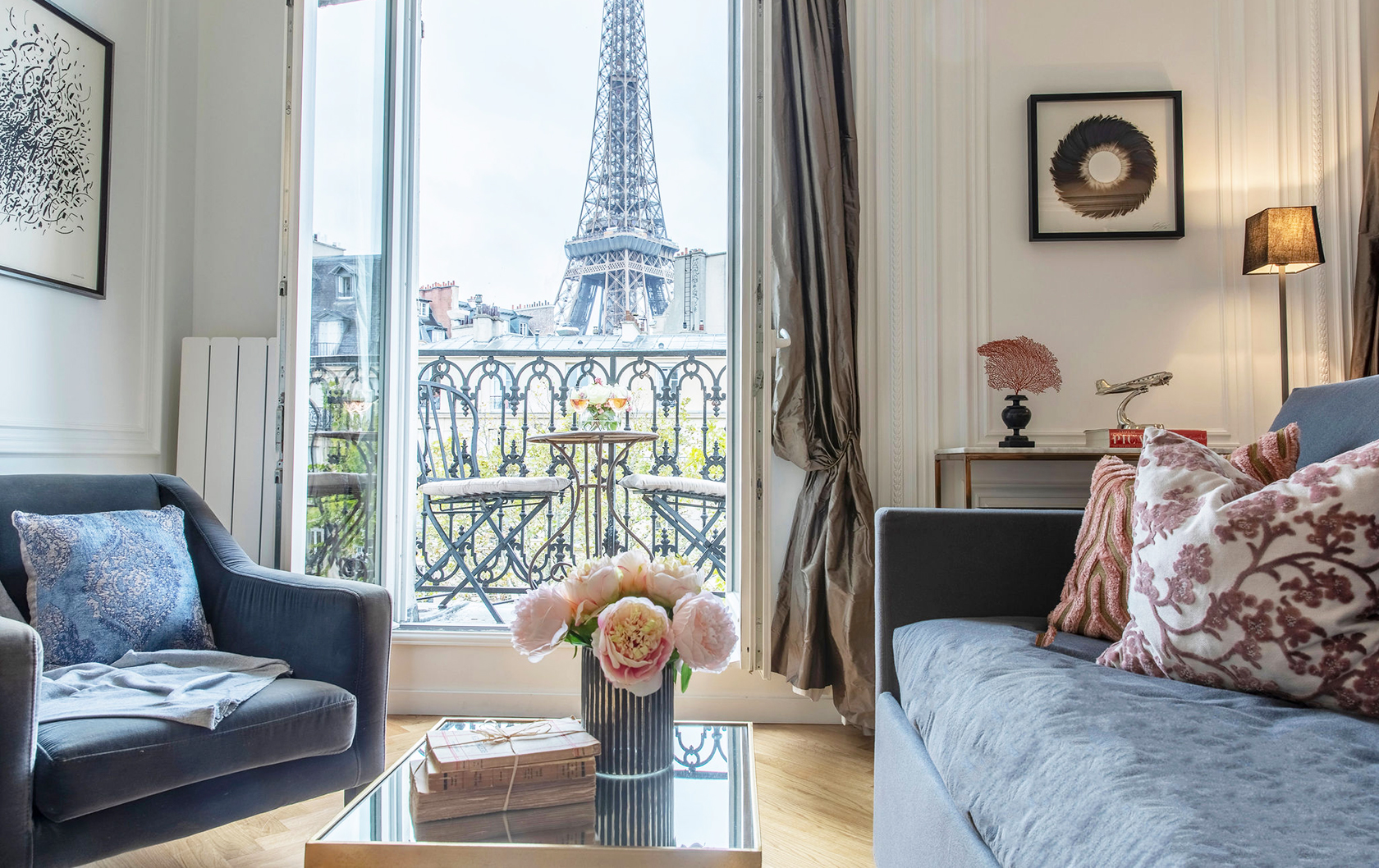 A picture-perfect view of the Eiffel Tower from Cabernet.

Our Cabernet apartment has welcomed so many happy guests—many of them returning time and again—and has always been a favorite for its impeccable Eiffel Tower view, long balcony set above the tree tops and comfortable style. Yet even our most popular Paris apartments sometimes need updating. Often that's a bit of redecorating or adding beautiful chandelier found at an antique market, but other times it means a complete renovation and redesign. For our one-bedroom Cabernet apartment, it was time for a total transformation! Come along and take a look at the incredible new look at Cabernet.

Guests rave about the dreamy view of the Eiffel Tower from Cabernet's balcony.

TIME FOR AN UPDATE AT CABERNET

To update or not to update a guest favorite apartment – that is the question! Creating comfortable spaces for our guests is a top priority in our vacation rentals. While styles and tastes change, sometimes it is just time for a major remodel and update. Even with more than 20 years of experience remodeling and decorating apartments in Paris, we are always still surprised at how we can sometimes look at a familiar space and see a completely different—and often better—design. That is exactly what happened with Cabernet!

Upon entering the apartment there was a kitchen immediately to the right, followed by a bathroom with the apartment's only toilet (there was a second bathroom en suite to the bedroom but without a toilet) and then a hallway leading to the living room and dining area. 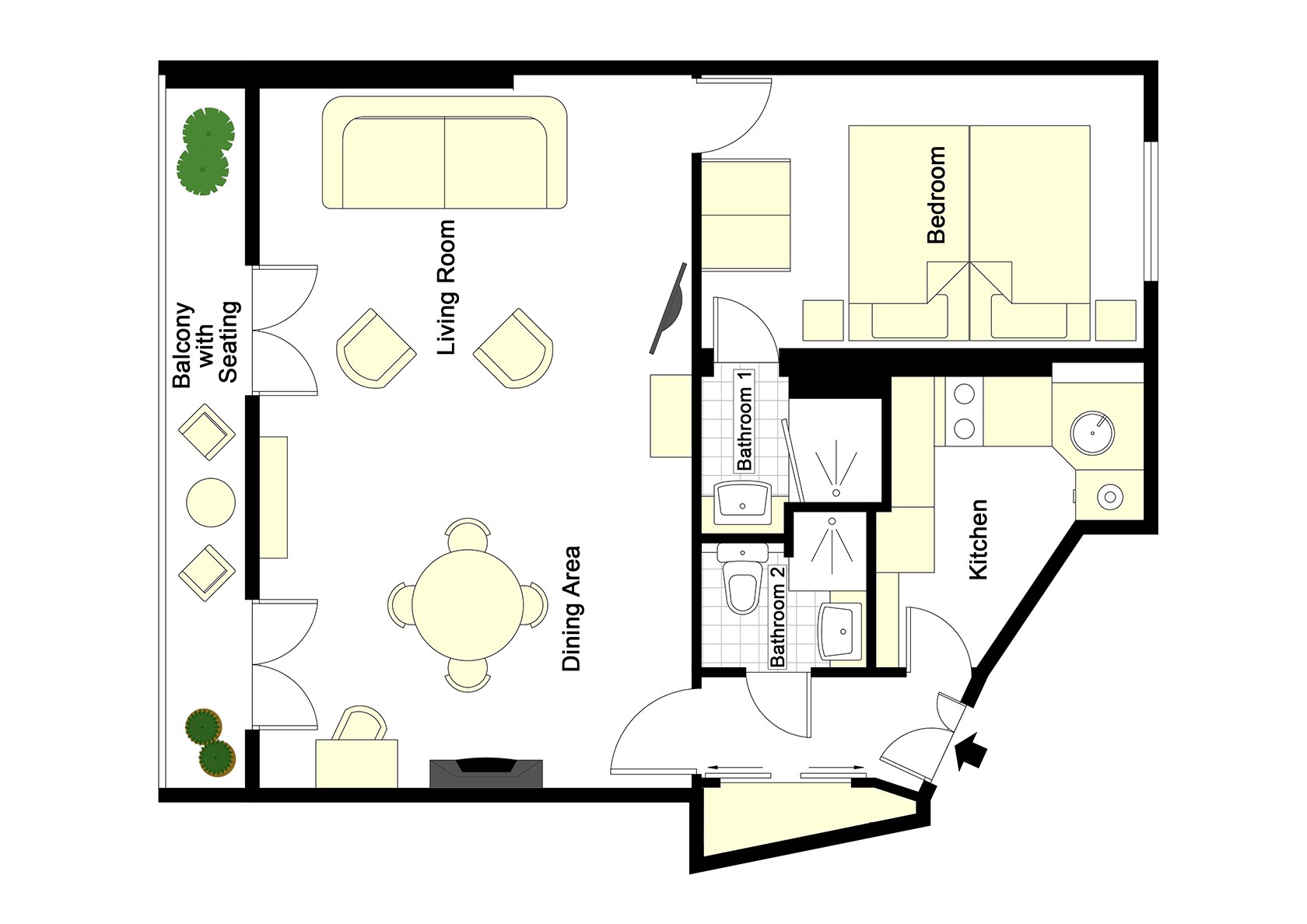 BEFORE: Entrance on lower right with the kitchen and bathroom.

The major “aha!” moment with Cabernet was that by moving the kitchen to the large open-plan living room and dining area, we could completely redesign the former kitchen area into two larger and more comfortable bathrooms – adding a second toilet in the en suite bathroom as well. Redesigning the entrance to the bedroom allowed us to rearrange the space and include significantly more storage as well. 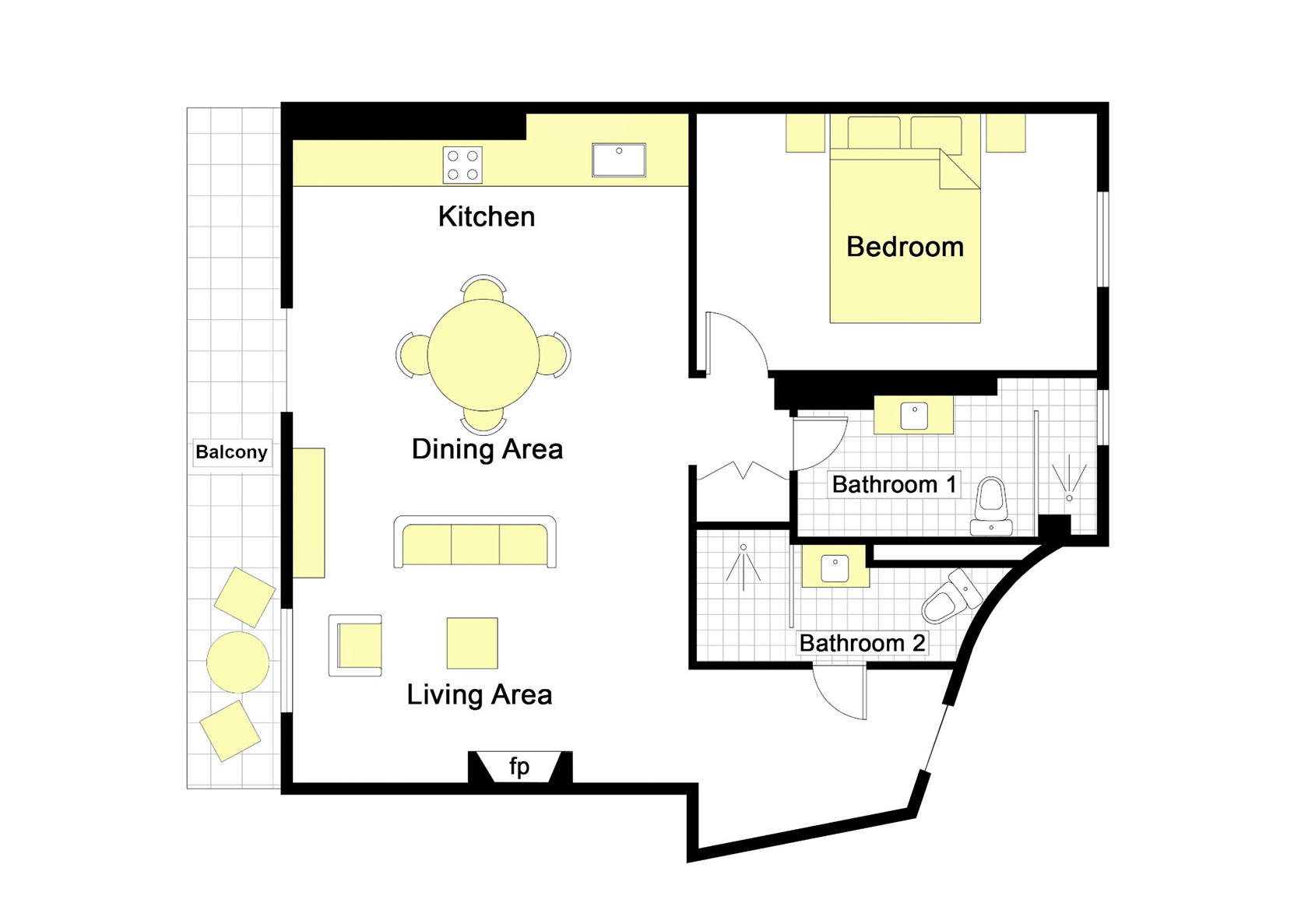 AFTER: Moving the kitchen and redesigning the bathrooms – a major update!

Now that you've had a glimpse of the footprint changes on the floor plans, come along and take a look at the dramatic before and after transformation of Cabernet. You won't believe how different it looks! 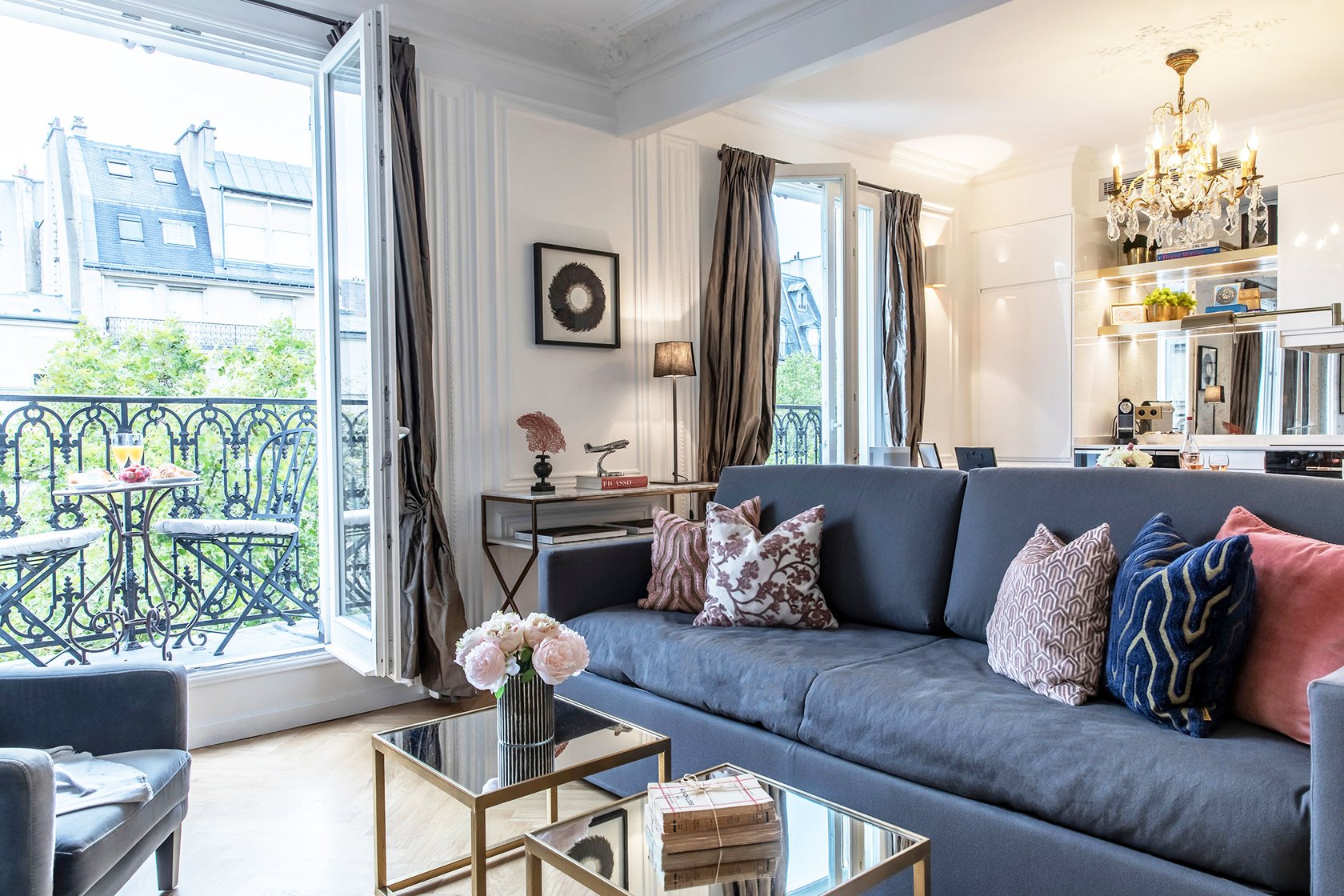 AFTER: The bright and welcoming new open-plan living room at Cabernet.

When you step into Cabernet's living room, the room is full of light from the two large French doors that open to a long balcony overlooking the tree tops. This room is just magic every moment of the day and night as the Eiffel Tower soars into view. So the idea of moving the kitchen to the far end of this room was a natural choice. Now you can start your day with coffee and step out to a bistro table on the balcony or enjoy meals at the table with a view of the Eiffel Tower. While that was possible before, it's far more convenient having the kitchen nearby rather than down the hallway. 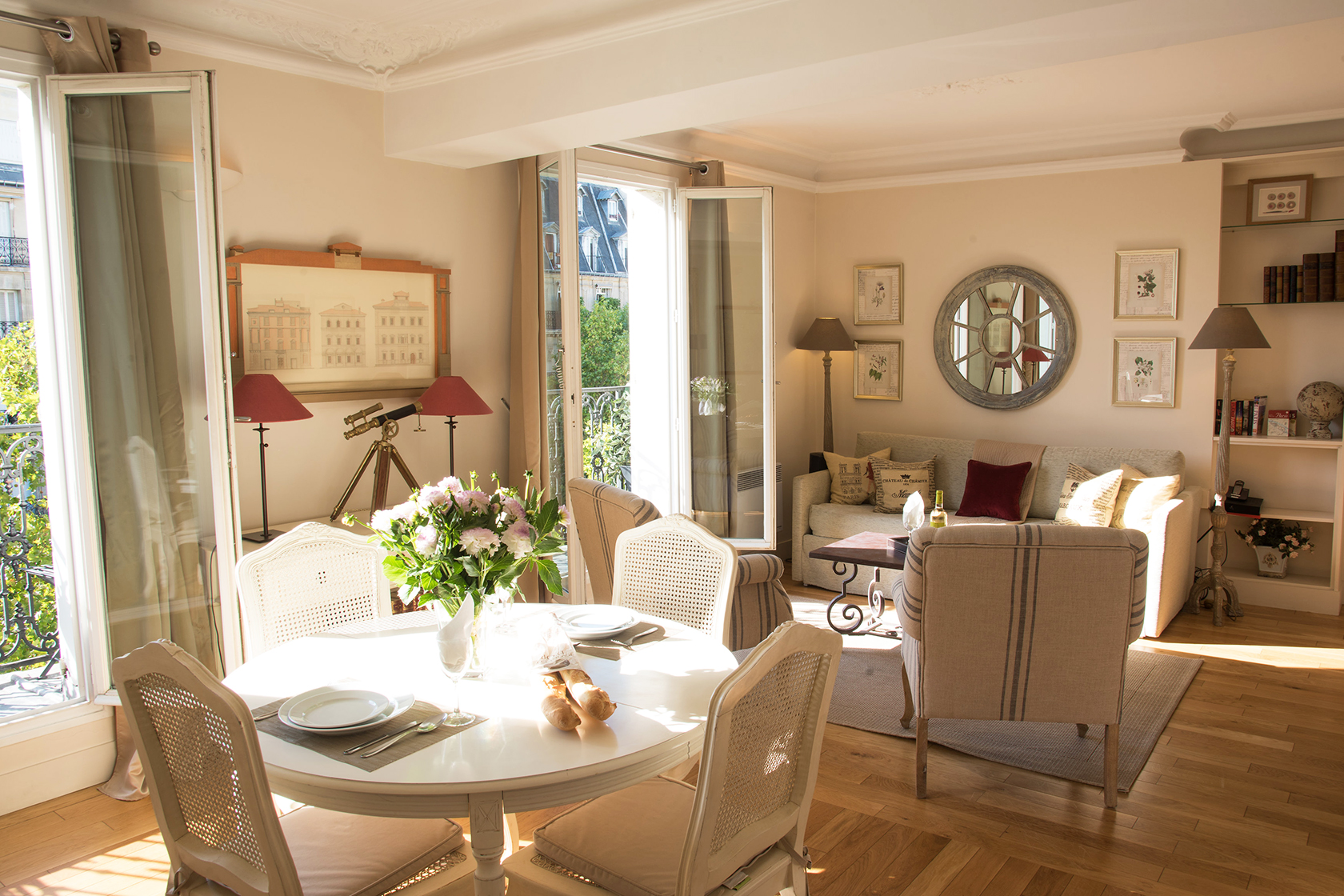 BEFORE: The living room before the remodel.

Shifting to an open-plan design and adding a kitchen to the far wall of the living room meant completely rearranging the layout of the room. Before the remodel, the sofa was along the far wall where the kitchen would need to be added. But by bringing the sofa to the middle of the room, we were able to create a living area around the beautiful original marble fireplace and place the dining table near the kitchen – thus dividing the room into two functional areas. 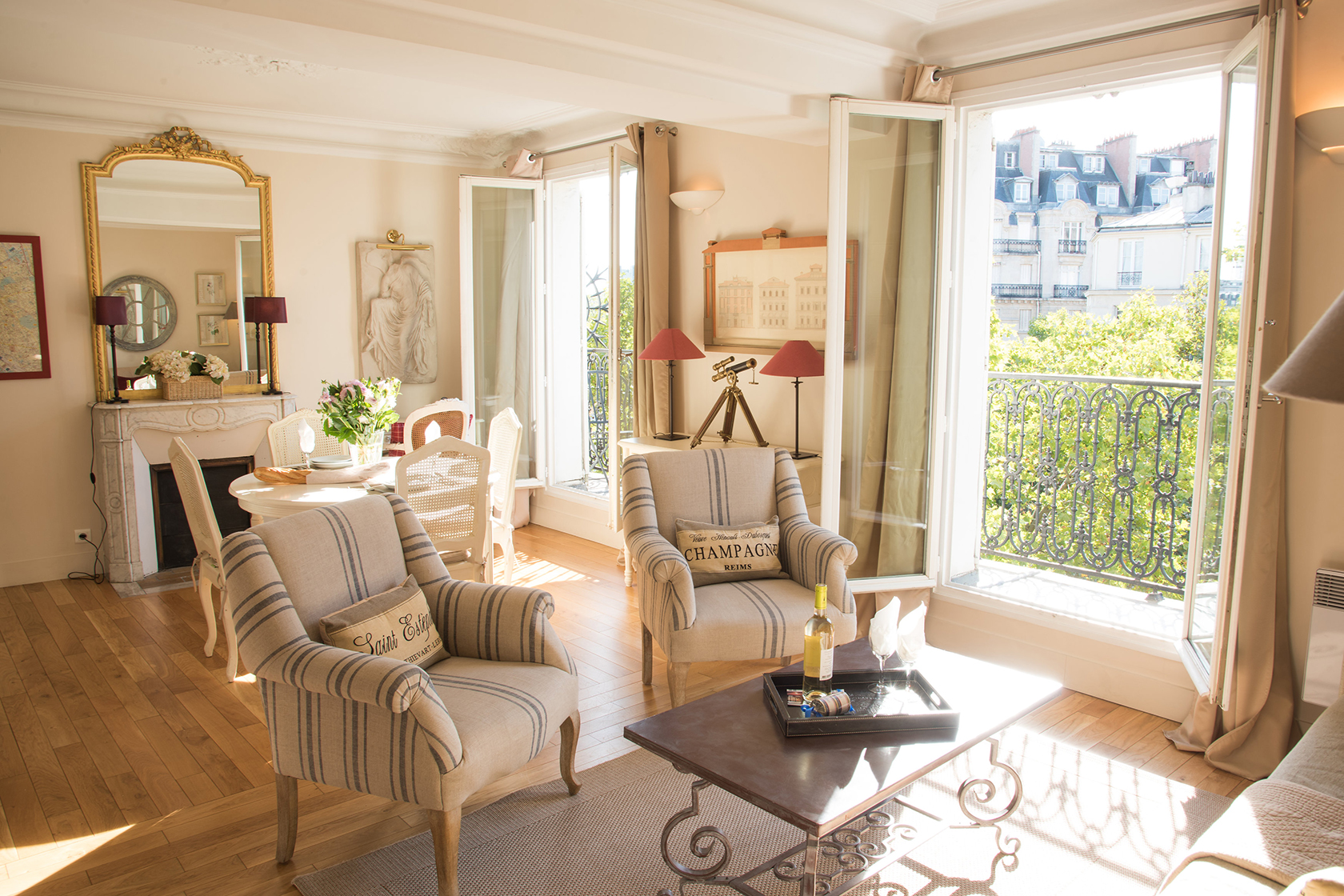 BEFORE: Cozy colors and soft styling.

The colors and design of Cabernet before the remodel were warm and romantic, but we knew the space could be brighter and feel more connected to the beautiful Parisian architecture and style that fills the space through the open French doors. With a blend of antique elements and modern styling, we love how the new living room continues to feel welcoming and comfortable but with a decidedly more modern Parisian style. 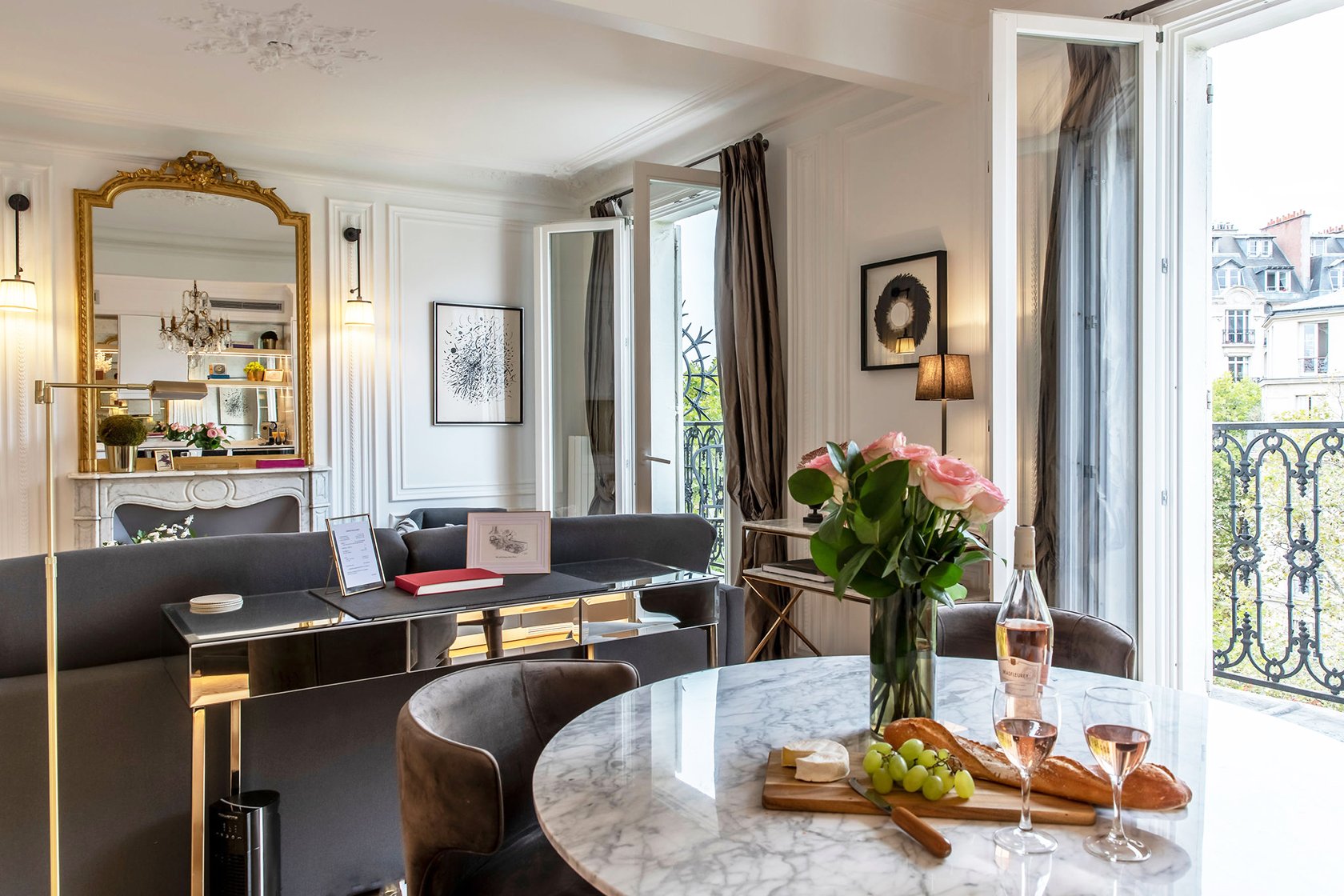 AFTER: A space perfectly designed for enjoying Parisian living.

Of course, it's all in the details. Take a look at the gorgeous new herringbone parquet flooring in a warm honey color and the traditional paneling added to the walls of the living room. These are the elements that set the scene and create a clean and defined design that you might miss on first glance. Now the living room is a welcoming space for our guests to enjoy every moment of their stay – from breakfast with an unforgettable view to relaxing on the sofa at night watching the Eiffel Tower sparkle.

A NEW KITCHEN FOR CABERNET 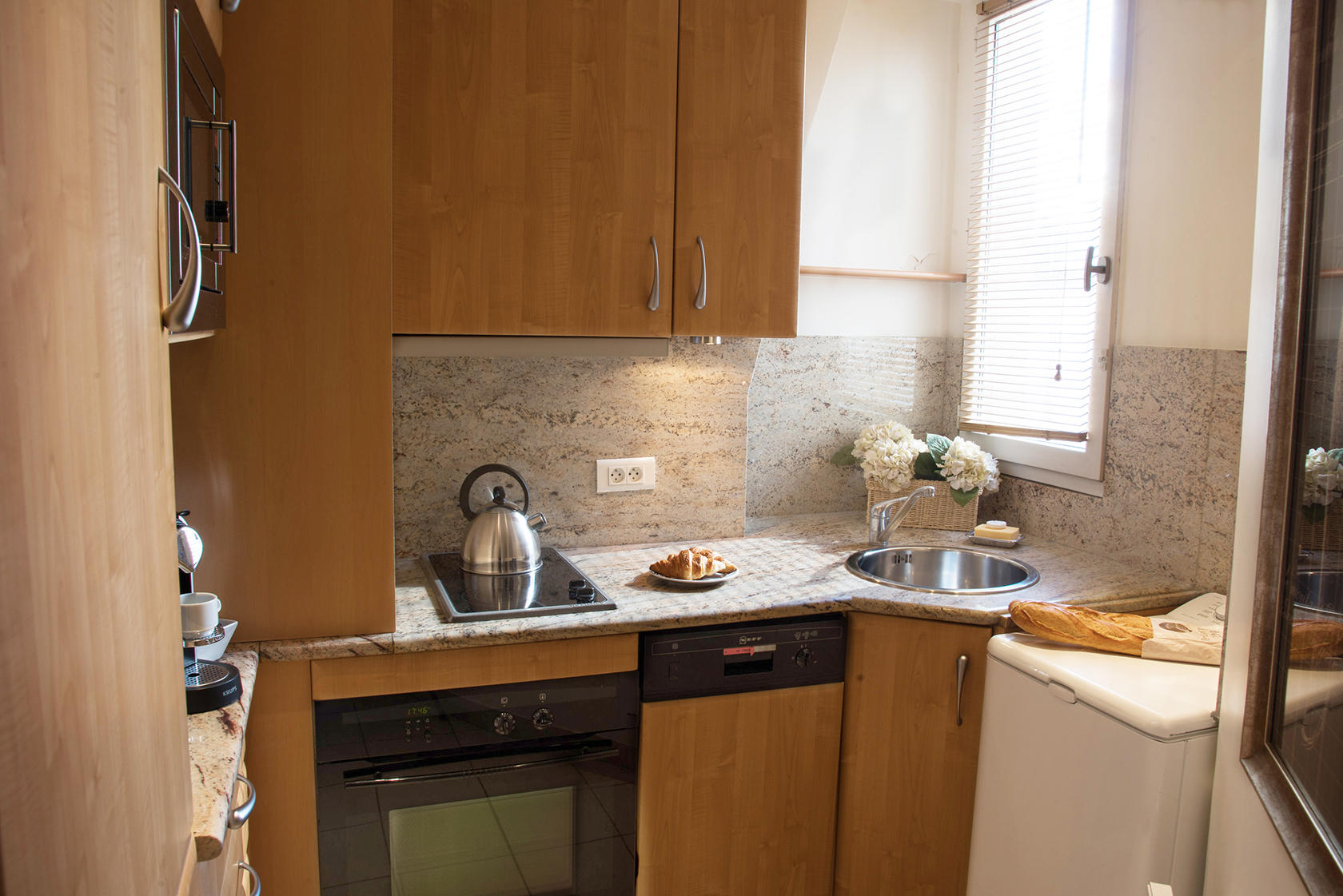 BEFORE: The separate kitchen at Cabernet.

While the compact kitchen at Cabernet was well designed and had everything needed, counter space was limited and there was only a two-burner induction stovetop. As it was located down the hall from the dining table in the living room, it meant a lot of walking back and forth for serving and cleaning up meals. Plus, everyone just wants to be in the living room as that's where you get to enjoy the prime Paris views. So, needless to say, we think the new kitchen at Cabernet is a marvelous update! 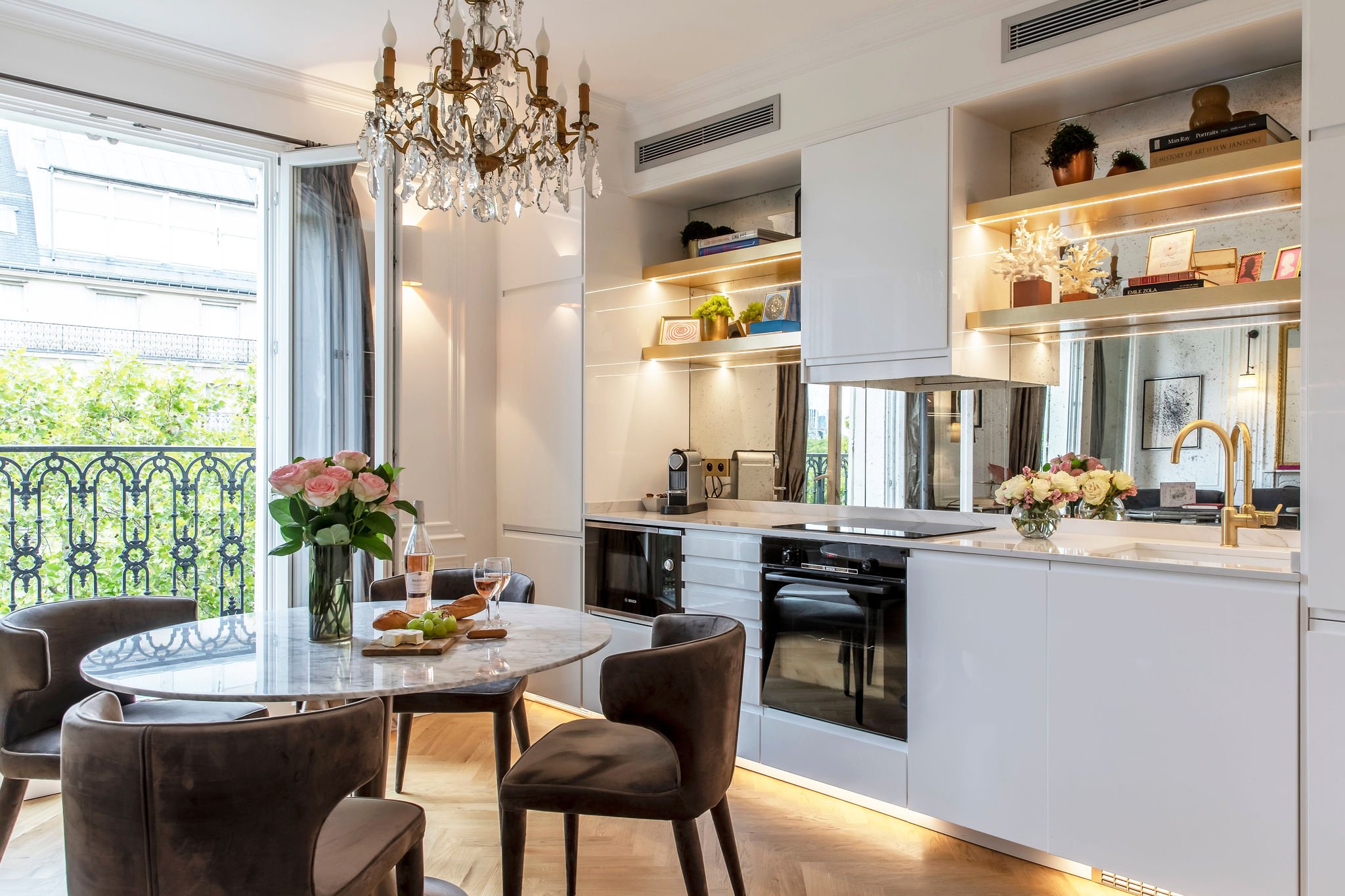 AFTER: A built-in kitchen along the wall of the living room.

We love the clever design of the kitchen and how the mirrored backsplash continues up behind the built-in shelves. The kitchen has plenty of storage, which meant these shelves could be used more for decoration rather than storage. This styling and the gold accents ties the kitchen in so beautifully with the design of the entire living room – striking that perfect balance of creating a sense of harmony in the space while also having two clearly defined areas. 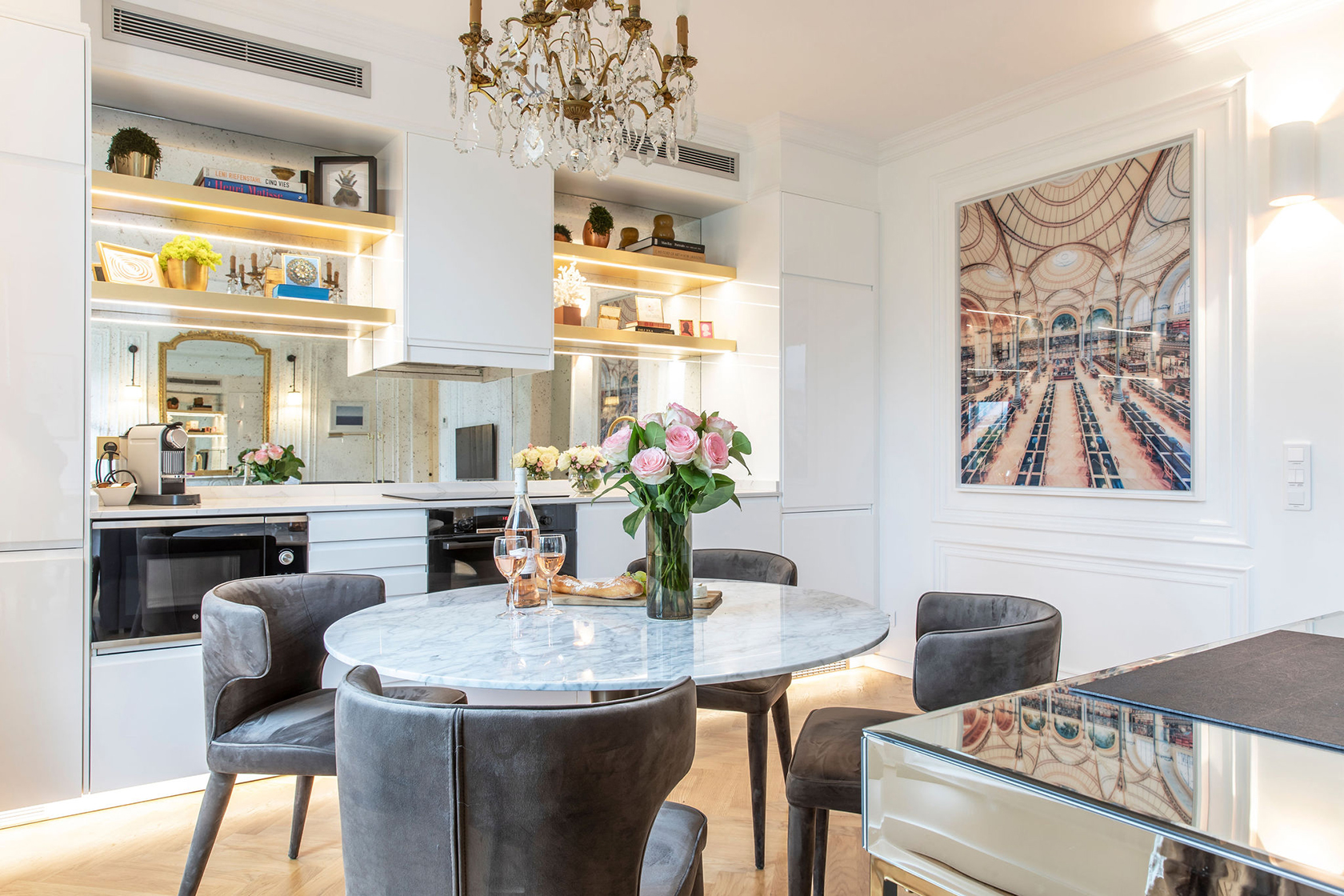 AFTER: Gorgeous new artwork in Cabernet.

While most of the Cabernet's decor was updated, we love how certain elements just feel too connected to a space to change. The large antique mirror above the fireplace was at home in this apartment and was left exactly as it was in the new design. However, it was balanced by an antique chandelier above the dinging table that is reflected in the fireplace mirror and all the new mirrors in the kitchen. Book-ending the room with mirrors was just another way to create a brighter and more unified design to the new open-plan living room. We love the final result!

AFTER: A new entrance to the bedroom and en suite bathroom.

If you enjoy pouring over floor plans like we do, you may have spotted that the key to redesigning the bedroom at Cabernet came from the important shift of the entrance from the far end of the room to closer to the center. Here's where the bedroom started before the remodel, which already was a cozy and inviting space. 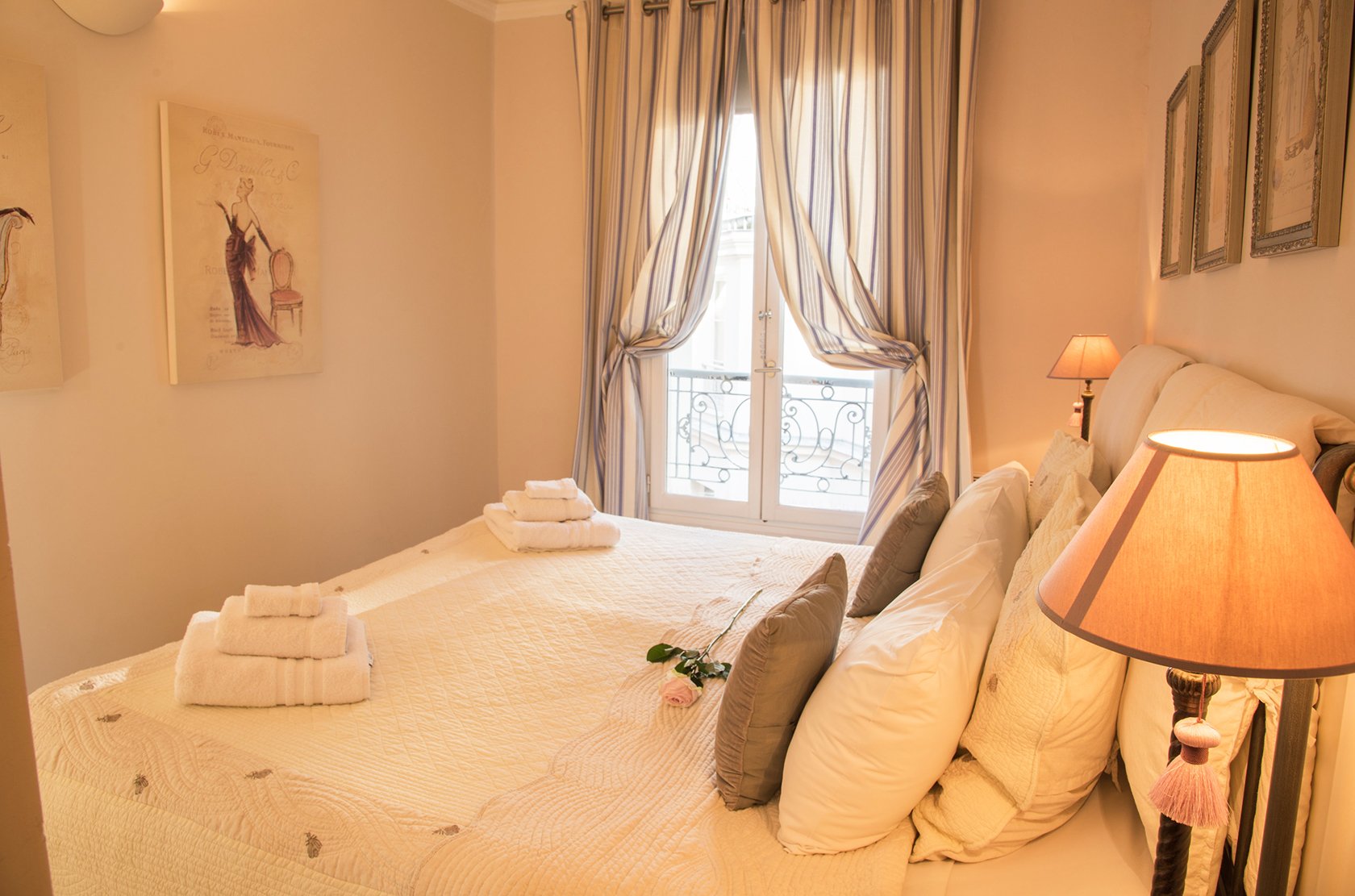 BEFORE: Bedroom at Cabernet before the remodel.

By moving the doorway to the bedroom, we were able to swap around which wall the bed was located on and create a roomier access to the en suite bathroom, which in the original design was convenient but on the small side. By placing the bed on the opposite wall, the room now feels more spacious and harmonious. 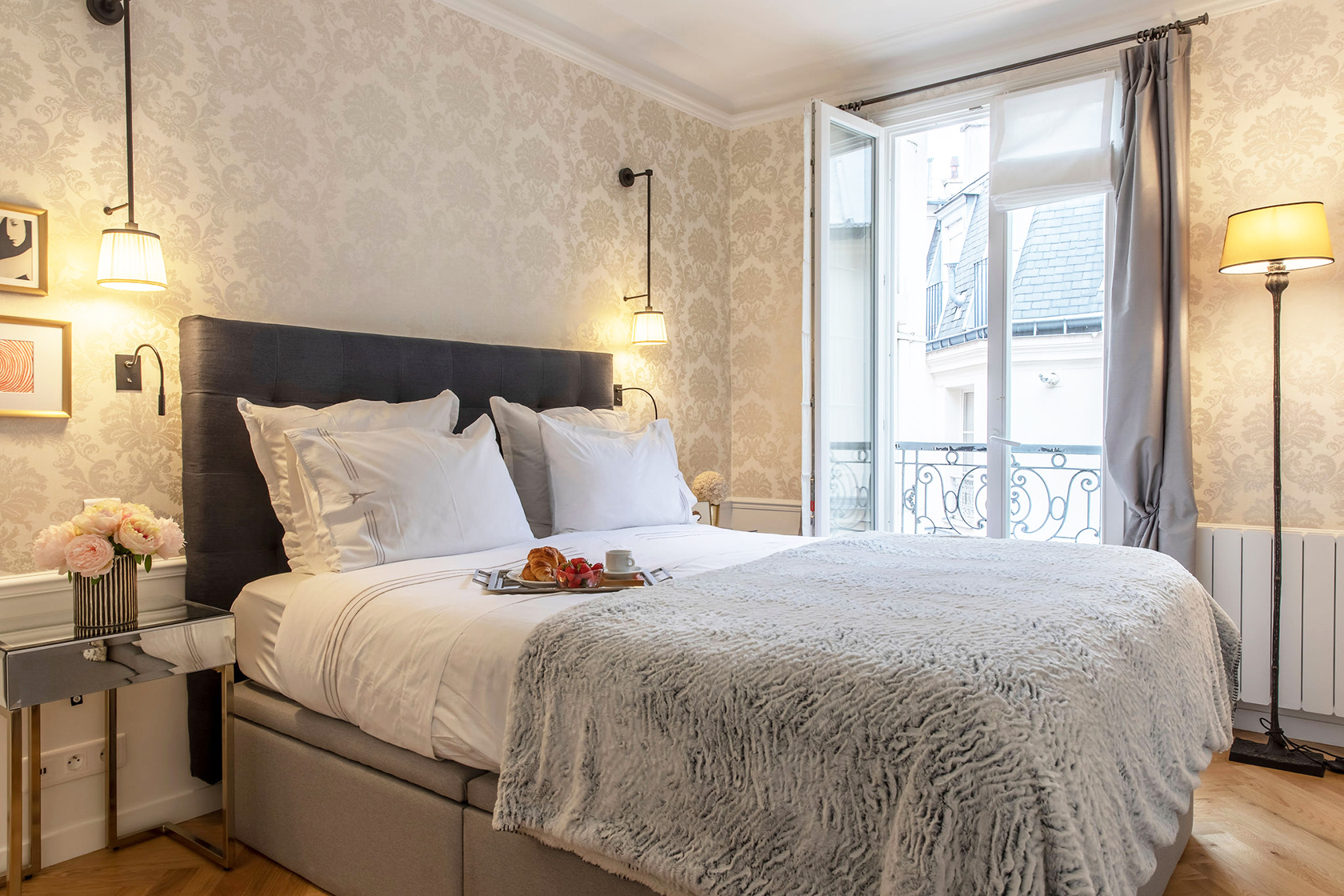 There are moments in each apartment remodel, especially when we revisit beloved spaces like Cabernet, where we just have to stand back and marvel at how these spaces continue to evolve and change. Just like your home, updates are exciting but it's also fun to remember how much we enjoyed earlier designs as well. 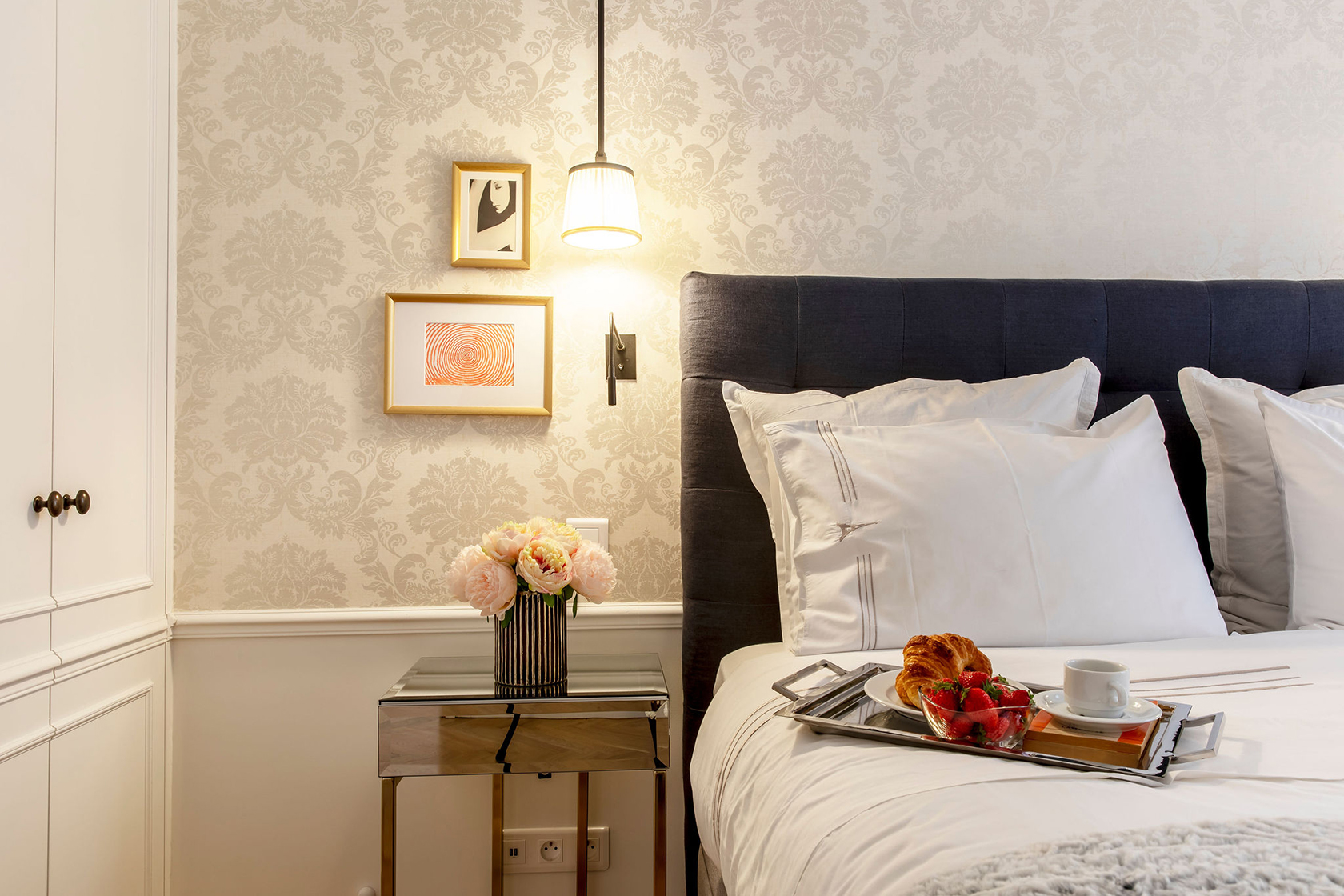 AFTER: Beautiful new decor in the Cabernet bedroom.

Beautifully patterned wallpaper, modern wall-mounted lighting and clean lines create a bright and charming space where you'll look forward to relaxing during your stay in Paris. Plus, with the new design we were able to add large built-in closets for plenty of storage. 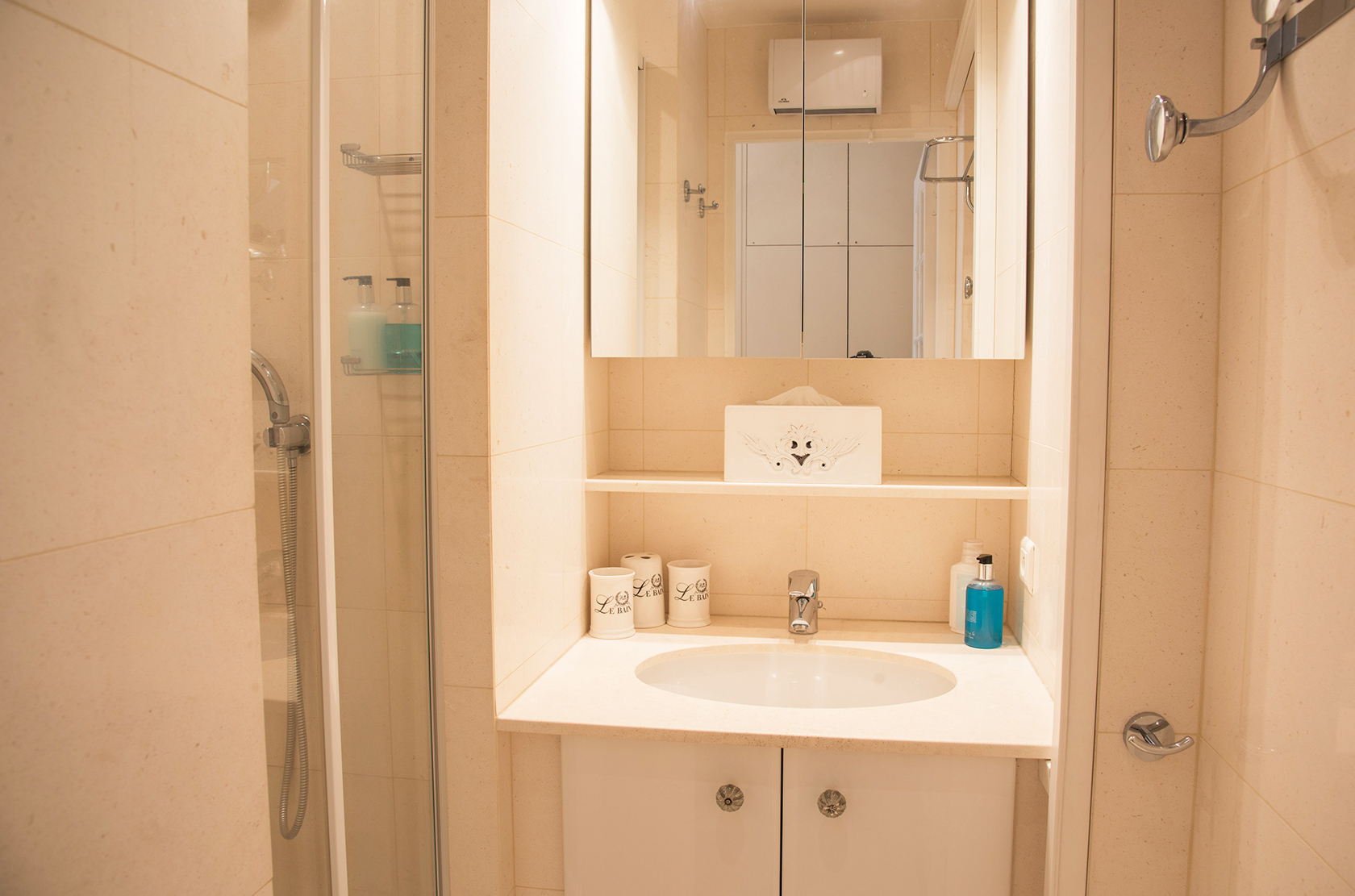 BEFORE: En suite bathroom with shower before remodel.

After the dramatically beautiful new kitchen, the bathrooms at the Cabernet were the second biggest area to change. And perhaps the most exciting! This apartment was always popular with guests in part because it offered two bathrooms, which means it can sleep up to 4 guests. However, with only one toilet located in the second bathroom (originally near the kitchen), it wasn't as convenient of a layout as possible. Now with all the extra space from the kitchen, we had a lot of room to work with. A designer's dream! BEFORE: Second bathroom with shower before remodel.

We started by knocking through the kitchen wall and essentially using half the space of the kitchen for the newly expanded en suite bathroom. At the far end of the en suite, you'll now see the window that was above the sink in the kitchen. Look at the beautiful new light and space! 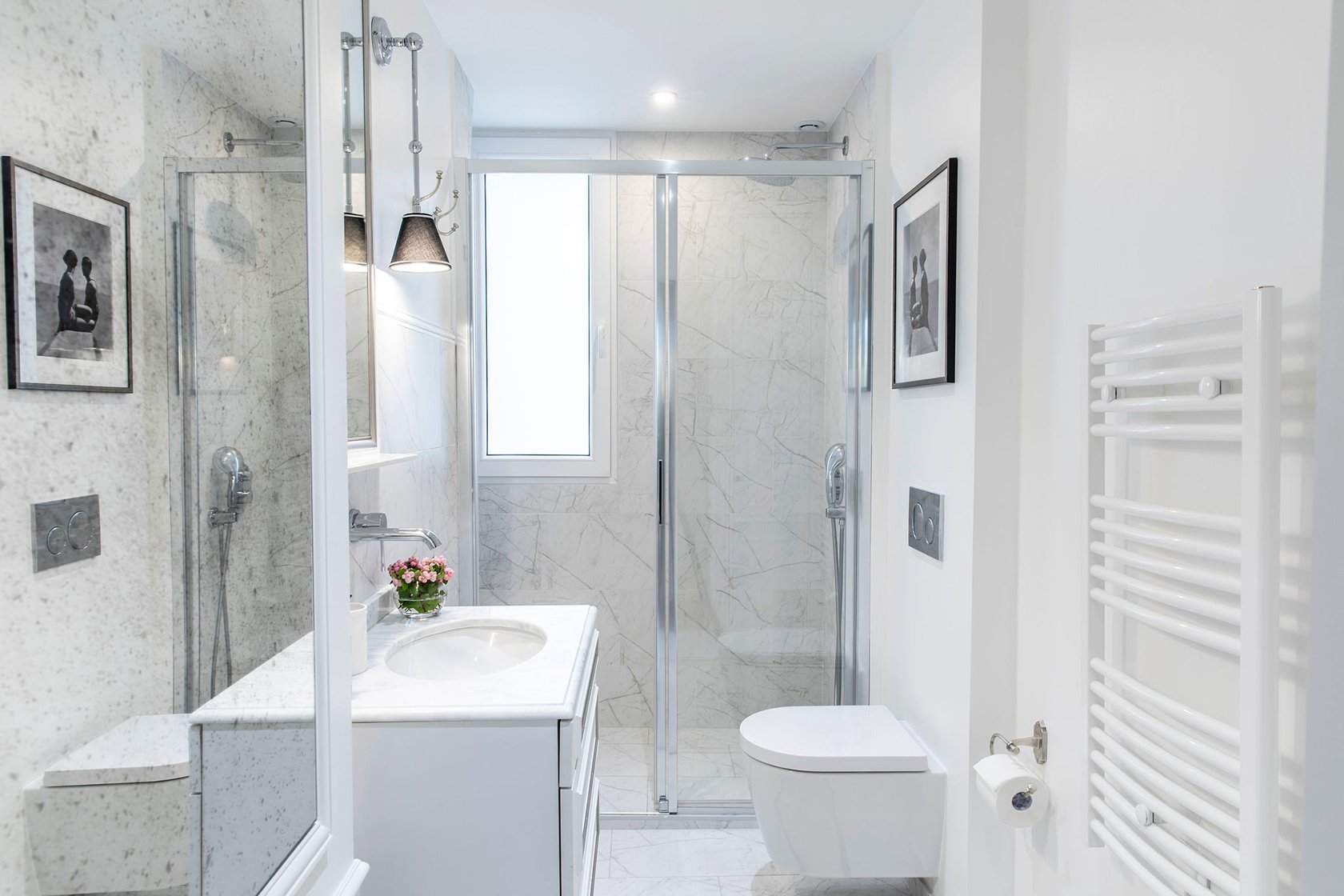 AFTER: En suite now incorporates the previous kitchen space – plus the kitchen window!

By opening the space we were able to include a large walk-in shower and finally add a toilet to the en suite bathroom. Large mirrors, beautiful marble tiles and plenty of storage under the sink were the perfect finishing touches. 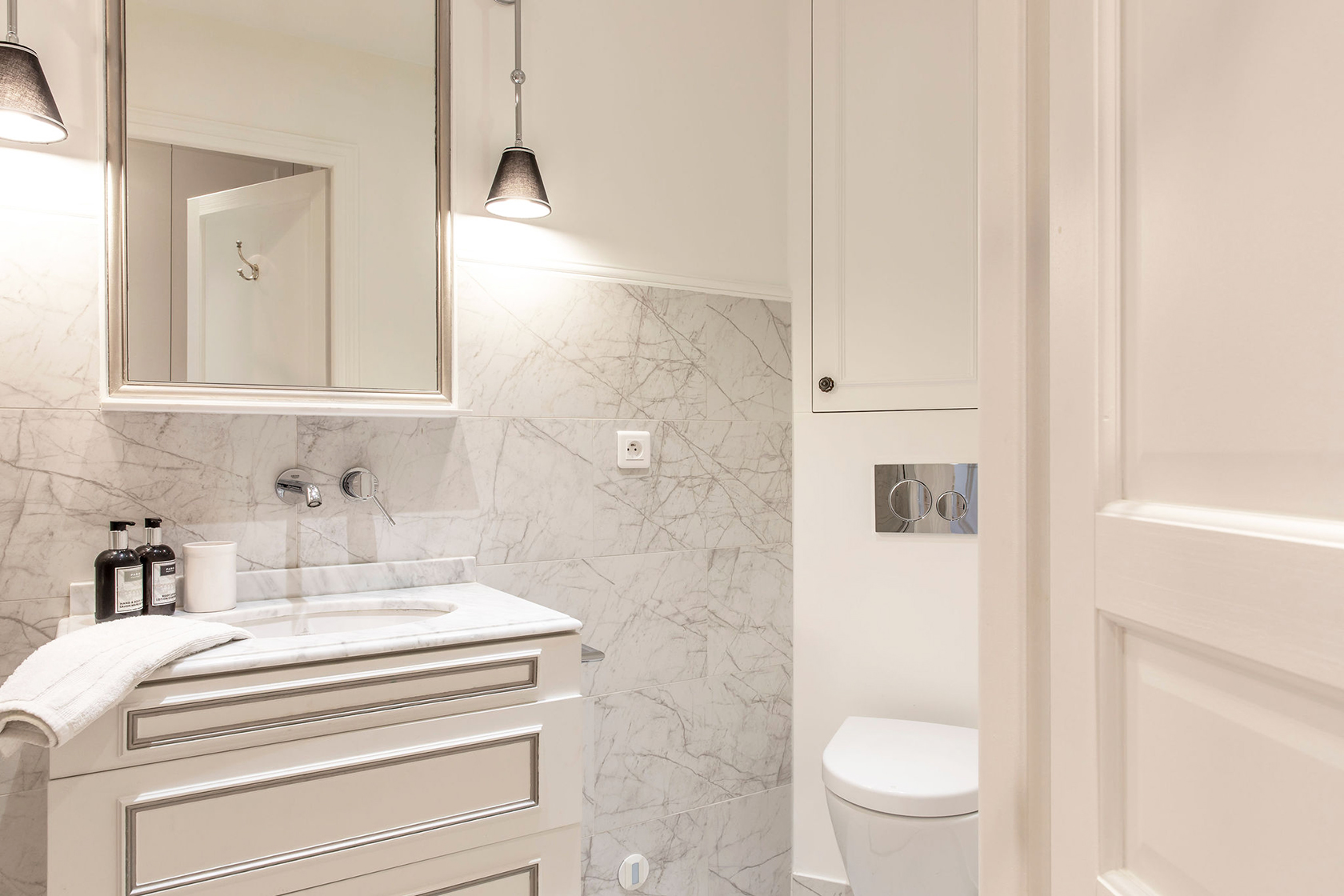 AFTER: Second bathroom is located off the entrance.

Then we moved on to redesigning the second bathroom, which was also expanded from the remaining part of the kitchen. That meant another spacious walk-in shower, large sink and the same fine design elements. 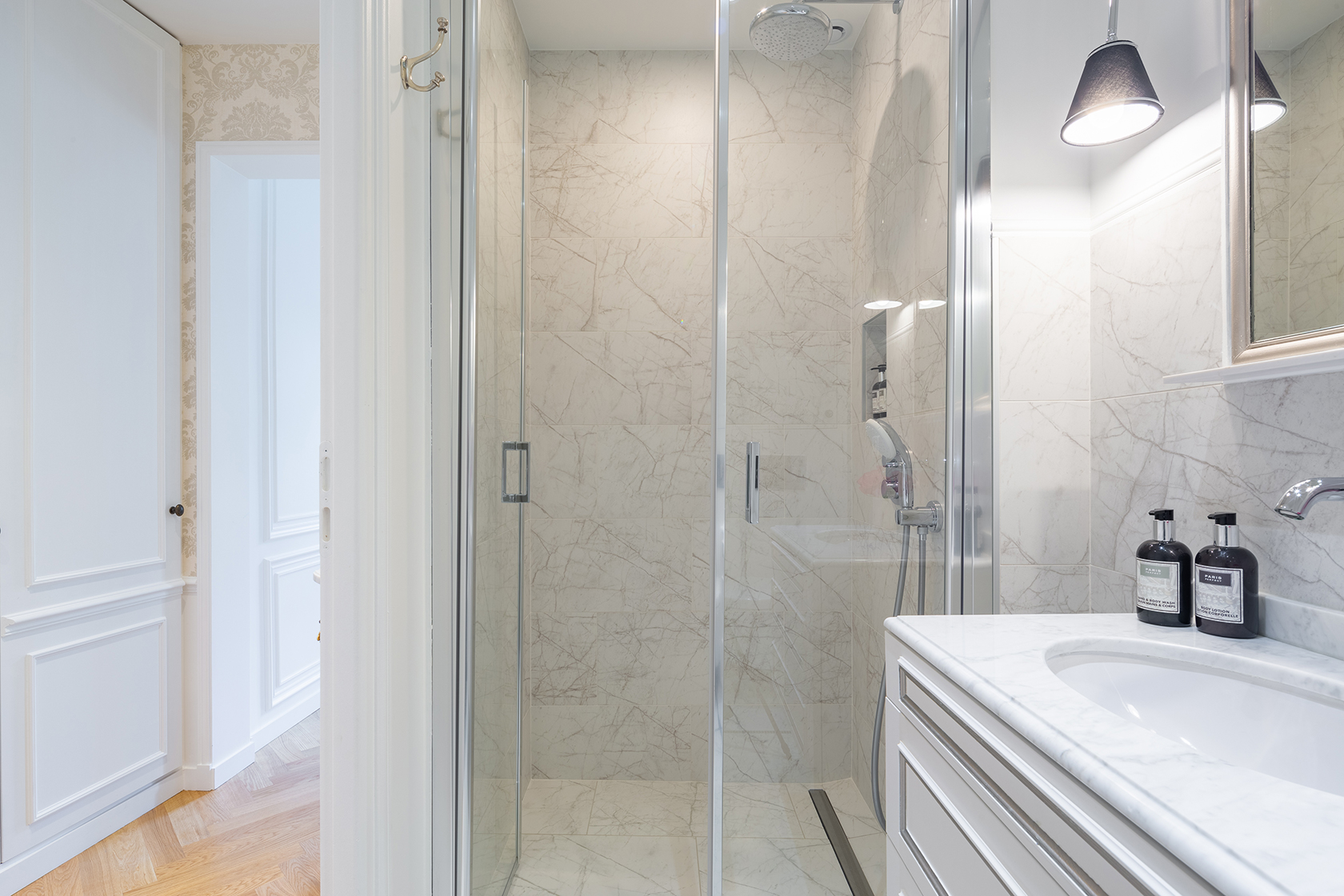 AFTER: Second bathroom located near the living room.

After the latest renovation, the Cabernet now has two full and independent bathrooms, which truly makes this space ideal for a small family or two couples thanks to the comfortable sofa bed in the living room. 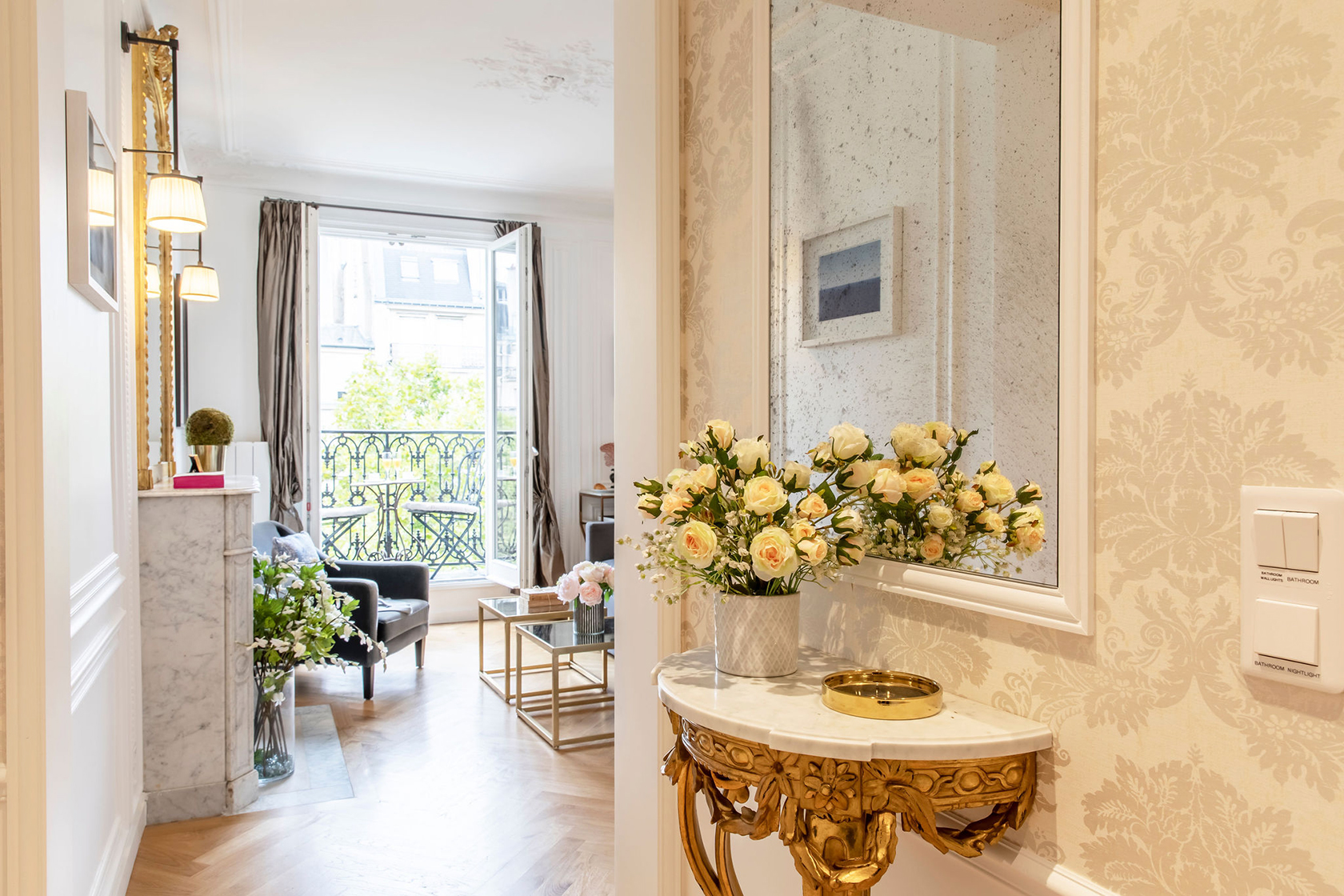 When you first step into your Paris apartment rental, we want you to feel drawn into a beautiful space that makes you feel at home from the moment you arrive. For Cabernet, we continued the elegant wall paneling from the living room and added a gorgeous floral wallpaper design to the area. The antique entryway table and large mirror draws the eye in to the living room. There was even space for a grand update with the addition of a full size washer and separate dryer. 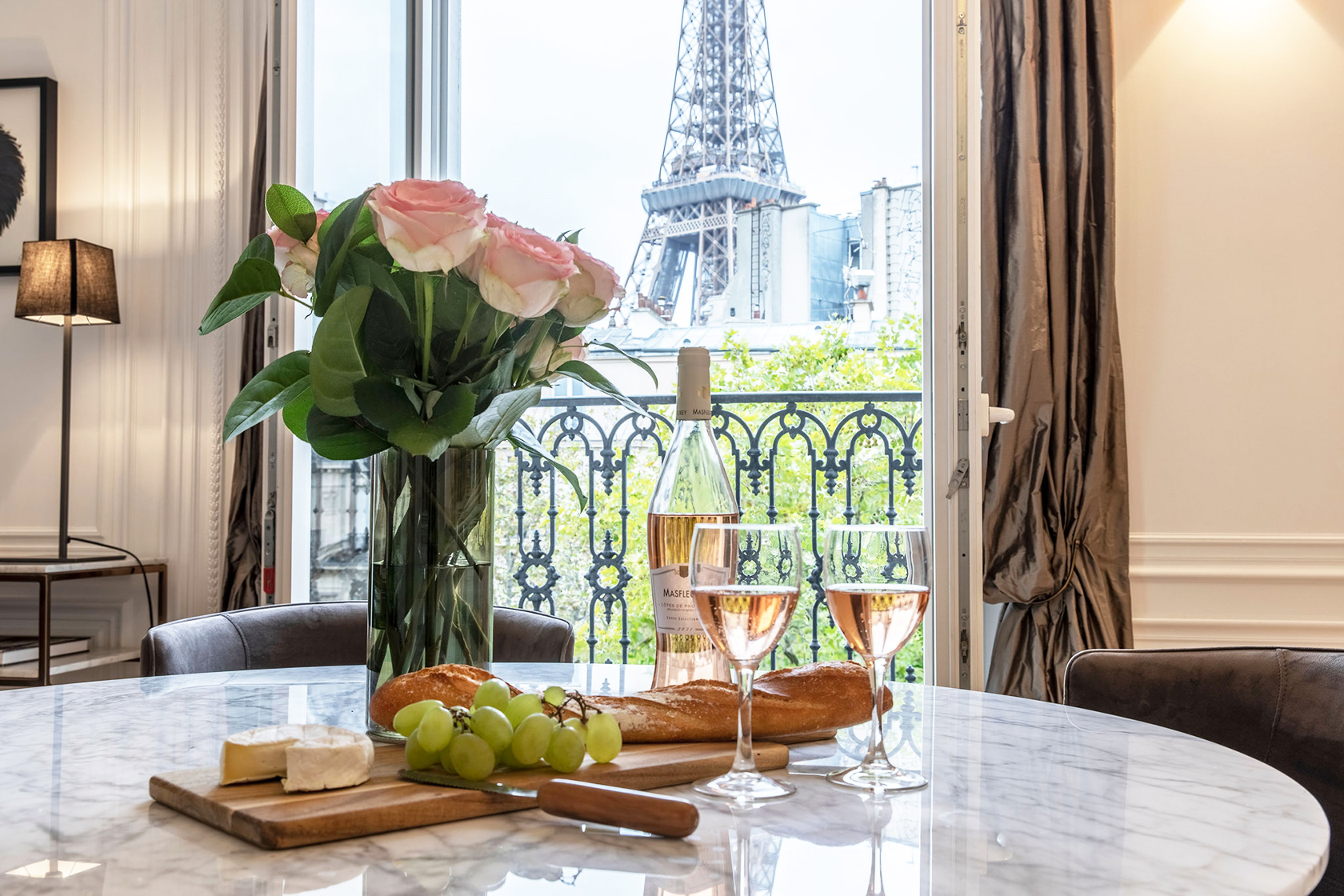 Your turn to stay in the beautifully remodeled Cabernet!

We hope you enjoyed following the story of the before and after remodeling of Cabernet. Now it's your turn to step inside and settle into a comfortable stay! Take a look at more photos of the Cabernet apartment and grab your winter and 2023 dates now before they're booked. Contact our team if you have any questions or to book now!

Posted on Friday, November 4th, 2022 at 9:50 am in Paris Home Remodels. You can follow any responses to this entry through the RSS 2.0 feed. You can skip to the end and leave a response. Pinging is currently not allowed. 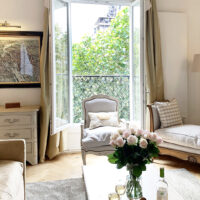 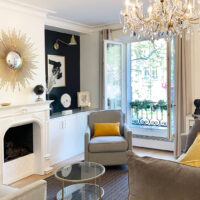 A Glam Before & After Transformation of the Beaujolais Apartment 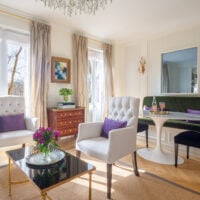 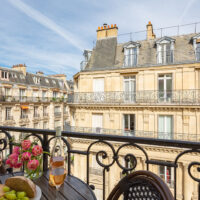 One Response to “A Marvelous Makeover of Cabernet – One of Our Most Popular Paris Apartments!”

Paris Blog > Paris Home Remodels A Marvelous Makeover of Cabernet – One of Our Most Popular Paris Apartments!