The Sound and Light Show is now celebrating its 4th season, and will be held 6 nights a week in the month of August for visitors who want to experience Parisian history in a new dimension.

The Hôtel des Invalides, or simply Les Invalides, is a grand complex of museums and monuments that celebrate the military history of France. Originally constructed by Louis XIV in the 1670s, and later added to or improved upon by a series of subsequent owners, the site was the scene of several major Parisian events including the riots of the French Revolution and the 1894 degradation of Captain Alfred Dreyfus. Today, it serves as an intricate museum, as well as the final resting place of Napoleon Bonaparte, his brothers, and a number of heroes, commanders and other military personnel of distinction. The central Cour d’Honneur courtyard, which is lined with Louis XIV’s stately buildings, is easily one of the most impressive aspects of the complex, and it is in this locale that this grandiose show is brought to vivid life.

Essentially, the grand courtyard serves as the auditorium, and as spectators trickle in for the show, they will be surrounded by 5,000 square meters of projected images that flood the courtyard and create dizzying scenes.

In this other-worldly atmosphere, where the audience is literally surrounded by the towering projected show, the story of Parisian history will begin to unfold against the backdrop of stunning architecture. From Gaul to the Middle Ages, and from the Grand Siècle to the heroic French Resistance, a shimmering whirlpool of images, resounding music, and expert narration will spin true tales that will leave audience members breathless.

It’s difficult to describe the all-encompassing experience, but potential spectators can think of it as “Surround Show” instead of just “Surround Sound.” The show is on full display in every direction, and as wide flashes of light breeze from one building within the Cour d’Honneur courtyard to the next, visitors will experience an interactive performance unlike any other in the city. To help you get an idea of the scope of the show, take a look at this teaser trailer:

One of the biggest advancements for the 2016 summer show is the addition of two English speaking shows per week. Held on Monday and Thursday nights, and narrated by Paul Bandey – an English actor living in Paris – these special shows ensure that all vacationers can enjoy the story behind the images, and take in the full experience.

Hundreds of thousands of people have already seen previous versions of Invalides: Sound and Light Show, and have come away spellbound. Well-known as one of the grandest sound and light displays in the country, we know that this performance will give guests an in-depth history lesson that will never be forgotten.

The Invalides is conveniently located for all our vacation rental guests who are staying in the 7th arrondissement, which means that this spectacular performance is only a metro ride or stroll away. And even though there’s ample space in the courtyard for 25,000 people, this show has a tendency to sell out fast, so securing tickets in advance is highly recommended. Visitors can learn more about the show and purchase tickets on the Invalides website. If you don't speak French, be sure to purchase tickets for the English language show on a Monday or Thursday.

Tickets are 22.30€, and special rates are available for children and teenagers ages 7-17, as well as large groups of more than 10 people. Children under 7-years-old are free, but parents should note that the big booming sounds and flashes of light may be intimidating for very young visitors.

Posted on Saturday, July 30th, 2016 at 12:03 pm in Paris Events. You can follow any responses to this entry through the RSS 2.0 feed. You can leave a response, or trackback from your own site. 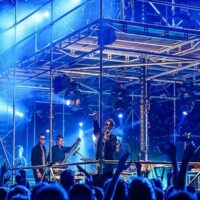 The Fête de La Musique Turns Up the Volume in Paris!