Leaving the beauty of Paris requires monumental effort, and many of us would rather stay in our Paris apartment for the week rather than venture too far from the city, but there's so much more to discover nearby! Giverny, Versailles, Disneyland and even the Champagne region are all less than one hour away by train. But have you heard of Château de Chantilly?

Of course, you could stroll and picnic to your heart’s content in the various gardens scattered across the 20 arrondissements of Paris, but nothing beats the fresh air, greenery and calm of non-urban areas.

If your home base is in Paris, but you're feeling like a change in scenery or yearning for a taste of the famed French countryside–the storybook farms and watermills, fields of flowers and white stone castles–a day trip to the Château de Chantilly is the perfect solution.

Just pack your bag with a camera and some delicious picnic snacks, then board the 45-minute train to Chantilly! Although nothing quite compares to the gilded, golden castle of Versailles, Chantilly impresses less with its opulence, and more with its fairytale-like turrets, and quiet sprawling fields.

People often sell gelato in the warmer months, and if it’s sunny, you can join French families on their hillside picnics, overlooking the castle and its reflection upon the peaceful moat.

You’ll also find far fewer tourists at Chantilly – one warm November afternoon, I had the vast, elegant gardens all to myself. Perfect for a truly relaxing day trip.

For the Love of Horses When I first visited Château de Chantilly, I approached the Grandes Écuries (Great Stables), entirely convinced I had arrived at the castle gates.

“Mais non,” a nearby guard shook his head when I inquired, and pointed towards a path beyond the massive, impressive building.

The road coiled around the stables and up towards the castle, initially hidden from view.

I should have known – horse heads adorned every doorknob and window in sight. But my mistake is apparently rather common, and would have likely made the Prince of Condé proud. According to legend, the prince believed that one day, he would be reincarnated as a horse. With his future in mind, he asked the architect Jean Aubert to build stables befitting his royal rank. They were erected in 1719.

Complicated horse-man reincarnations aside, the castle has a wealth of history, an entire museum devoted to horses, and some of the most prestigious horseraces of France throughout the year. You can also buy tickets to see shows and demonstrations of the equestrian arts.

Château de Chantilly marks an important passage in France’s history, as it last belonged to Henri d’Orléans, Duke of Aumale, son of the last King of France, Louis-Philippe. The prince was considered one of the greatest collectors of his time, and utilized Chantilly as a showcase for the innumerable manuscripts and artworks he collected. He finally bequeathed his collection to the Institut de France in 1886.

Before the duke’s time, a previous French castle overlooked the village of Chantilly. Although it was eventually destroyed during the French Revolution, this site has served as an essential location for the French royal family since the 1500’s, when Pierre Chambiges constructed a grand mansion for Constable Anne de Montmorency.

From the moat to the sprawling gardens, the plush rooms and ancient statues, Château de Chantilly is everything you’d expect from a princely estate.

Chantilly, where have you been hiding this entire time? People across cultures and continents have heard of the Louvre’s famed magnificence, yet few know Chantilly even exists. When the Duke of Aumule donated the castle and his artwork to the Institut de France, he had two conditions. One, that the layout remained unchanged, and two, that his artwork never leave the castle.

His wishes have been honored, so today, you can still see the original artwork displayed precisely how he desired, providing a unique glimpse into typical styles of the 1800’s. The artwork here is never allowed to leave the castle walls for temporary exhibitions in museums around the world, so this is the only place you'll ever be able to see certain masterpieces by great artists like Raphael and Ingres. Colorful rays of sunlight bouncing off of lofty church walls have been captivating people for centuries. Any design of stained glass windows devoid of color would likely be mocked.

But the Château is home to stunning sepia-toned windows, decorated with bright golden hues, created in the 16th century. As opposed to typical religious scenes, these windows depict the story of Psyche from Greek mythology.

The unconventional artwork only adds to the mystique of the castle.

Falling Back into the 1800s Although the French Revolution demolished the original château, the reconstructed version of the 1800’s has survived two world wars, and looks much as it did in the Duke of Aumale’s time.

As you stroll through the gardens, concealed by the tall, fluttering grass and purple wildflowers, it takes little imagination to reimagine the French castle of once upon a time – a time long gone, yet still alive today through the preservation of Chantilly.

It’s a castle of the ages. A place where time stretches and lengthens into nonexistence, so that if you’re quiet enough, and you look carefully, the present moment will fade, and just for a moment, you’ll be strolling through 1860, a part of France’s living history.

By train:
From Gare du Nord take the TRE train (25 minutes) and get off at “Chantilly-Gouvieux”

From Chantilly train station to the domain:
On foot: approximately 20 minutes
By taxi: 5 minutes
By bus: the DUC bus (Desserte Urbaine Cantilienne), a bus provided free of charge by the municipality of Chantilly. Departure from the bus station, get off at “Chantilly, église Notre-Dame”.

Posted on Tuesday, April 12th, 2016 at 3:00 pm in See & Do. You can follow any responses to this entry through the RSS 2.0 feed. You can leave a response, or trackback from your own site. 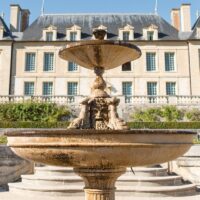 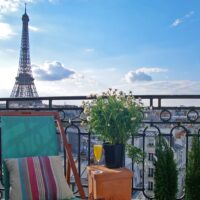 Why is the Chateau Latour apartment in Paris better than the Shangri La?